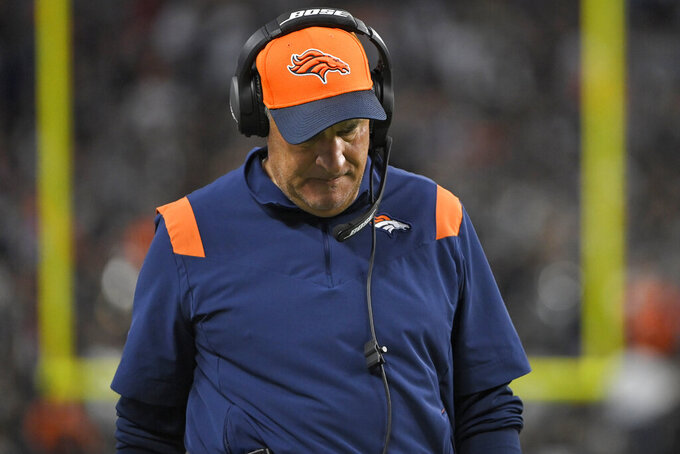 Denver Broncos head coach Vic Fangio walks along the sidelines during the second half of an NFL football game against the Las Vegas Raiders, Sunday, Dec. 26, 2021, in Las Vegas. (AP Photo/David Becker)

ENGLEWOOD, Colo. (AP) — There isn't a team in the league that would want to face Denver's suffocating defense in the playoffs. Thanks to the Broncos' abominable offense, nobody's worrying about having to go up against Justin Simmons, Patrick Surtain II and Bradley Chubb in the postseason.

Barring a mathematical miracle, the Broncos (7-8) will have cleared out their lockers and scattered for another offseason of uncertainty by the time wild-card weekend rolls around Jan. 15.

Coach Vic Fangio, who is 19-28 in three seasons as head coach, said Monday he's not concerned about getting fired.

“Do I acknowledge that it's certainly out there and could happen? Absolutely. But do I worry about it? I absolutely do not worry about it, for many, many reasons,” Fangio said.

Asked if he felt he and his staff deserved to return next year for the final year of his contract and if he'd come back in 2022 even without an extension, Fangio said, “Absolutely" on both counts.

Fangio said his discussions with general manger George Paton are framed on the present: “Sometimes those conversations lead into the future, but we don't go too far into the future. We're focused on the task at hand right now.”

Fangio said he and Paton “get along tremendously”, but he demurred when asked if he felt he needed to win out to finish 9-8 and snap the franchise's four-year streak of losing records.

“I'm not worried about do I have to win the next two to secure the job,” Fangio said. “That's totally not my frame of thought right now.”

Nobody knows how Paton, nearing his one-year anniversary on the job, will handle the Broncos' failure to make a strong playoff push. Will he prefer a new coach of his own choosing? Would he make Fangio's return contingent on his replacing some assistants such as embattled offensive coordinator Pat Shurmur or special teams coordinator Tom McMahon?

Paton hasn't addressed any of those questions publicly.

The Broncos are a better than 99-in-100 bet to miss the playoffs for a sixth straight season after their 17-13 flop at Las Vegas on Sunday when the offense negated another stellar defensive performance punctuated by three takeaways.

Denver's offense managed an abysmal 158 yards, rushed for a mere 18 yards and converted a solitary third down in losing for the third time in four games.

The Broncos' plus-3 turnover margin ordinarily would have atoned for allowing Josh Jacobs to scurry for 129 yards.

Quarterback Drew Lock played nearly mistake-free in his first start of the season with Teddy Bridgewater (concussion) sidelined, but his receivers had plenty of big drops and 15 of 22 for 153 yards wasn't nearly enough to complement Denver's dominant defense.

“When you get 158 yards of offense and eight first downs, it’s hard to say anything good about the offense,” Fangio lamented after the game.

Fangio seems at a loss about how to fix an offense that's averaging 19.9 points overall and just 13.6 in Denver's eight losses.

“We just have to keep looking at it and find a way to get it improved obviously," he said.

Fangio said he'd prefer to start Bridgewater next week, but that Bridgewater remains in concussion protocol and "until he's cleared by the independent docs and says he's ready to go, we have to assume that he won't be available to play.”

Despite their thin odds, Chubb said nobody's giving up on the season.

“We’re not thinking about next year. We’re thinking about these next two weeks against the Chiefs and Chargers and we’re going to go out there and ruin somebody’s chances,” he said.

A team that used to so often enjoy the spoils of victory is relegated once again to playing the role of spoiler.

The defense is allowing 17.3 points a game, tied with the New England Patriots for best scoring defense in the league.

The offense is imploding down the stretch with dropped passes, missed assignments and a seeping unawareness of the first-down marker's location.

Making his second career start, ILB Jonas Griffith led the Broncos with 13 tackles, six of them solo, including two tackles for a loss.

RB Melvin Gordon's seven carries for minus-4 yards was the worst game of his seven-year career.

26 — The number of times in 47 games under Fangio that the Broncos have failed to score at least 20 points. The Broncos are 4-22 in those games.

A trip to face the Chargers (8-7), also losers of two straight.