Fant likely to get second start at tackle for Seahawks 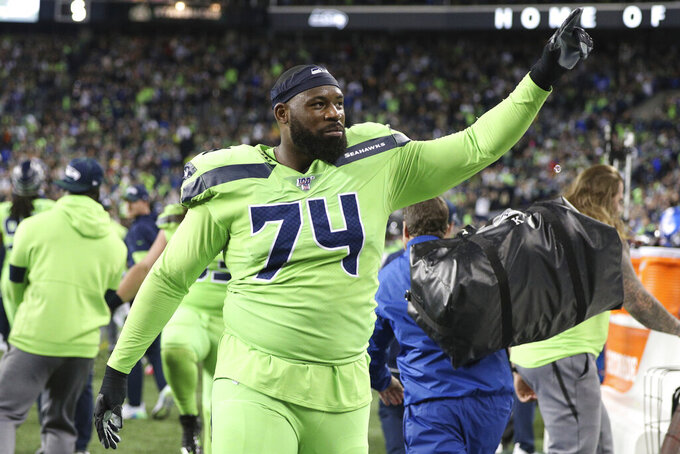 He was just slightly more prepared for the opportunity this time than he was in 2016.

"It took a little time to get going, knock a little rust off," Fant said. "Once I got going I felt that I was good though."

Fant got the call to start against the Browns with Duane Brown missing the game due to a biceps injury. That injury will likely keep Brown out again this week as well as Fant readies to start for a second game in a row. When Fant started 10 games as a rookie in 2016, the circumstances were different.

Fant had only started playing football a year prior during his final season at Western Kentucky. He'd played basketball for the Hilltoppers and only took up football as a senior. He didn't even really have a position, bouncing from tight end to defensive line and playing only a handful of snaps altogether.

He made the Seahawks as an undrafted rookie almost purely on projection and potential. He wasn't supposed to play much as a rookie. But when injuries hit, Fant ended up making 10 starts instead.

After missing the next year with a torn ACL, Fant carved out a role in Seattle. He's trusted to serve as an extra tight end in jumbo sets and can back up either tackle position. Now with three years' experience under his belt, Fant is getting a bigger chance.

"He did well," offensive line coach Mike Solari said of his showing in Cleveland. "George did a nice job at the left tackle spot and it will be exciting to see him ascend with more and more reps. He's a good football player and he's been waiting so long to get this opportunity and he has a great opportunity now."

Brown is listed as questionable to play against Baltimore but has been unable to practice the last two weeks. Also questionable is right guard D.J. Fluker, safety Bradley McDougald and defensive end Ziggy Ansah.

Fluker has been able to practice the last two days and may at least be available as a reserve for Sunday's game against the Ravens. Ansah was limited in practice Friday after injuring his ankle last week while being tackled on a fumble recovery.

Back spasms have kept McDougald out all week. Additionally, safety Lano Hill is doubtful due to an elbow injury. If neither can play, rookie Marquise Blair may get his first career start.

"There's no question about his ability level, it's just getting acclimated," coach Pete Carroll said. "He's had a really good week of practice. He's got a ton of work because of the situation with the safeties and so this is as ready as he can possibly be at this point right now so we're looking forward to him playing if that's the call."

Meanwhile, defensive tackle Jarran Reed is set to return from a six-game suspension. The team will likely place tight end Will Dissly on injured reserve to add Reed to the roster. Dissly tore his Achilles last week in Cleveland and had surgery Thursday.

Reed, who had 10 ½ sacks last year for Seattle, said he's ready to play as much as needed this weekend.