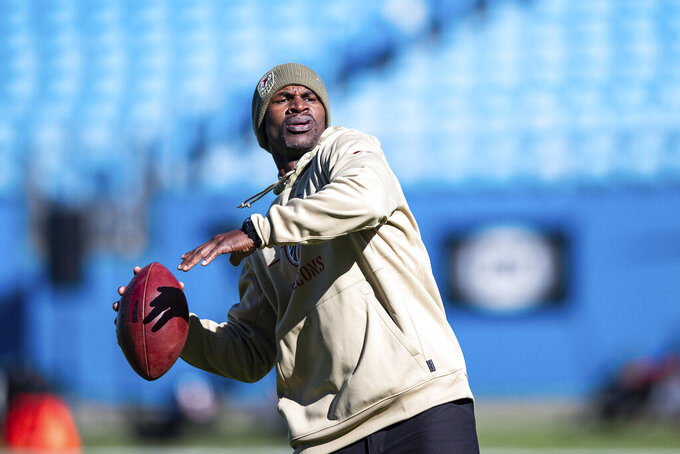 Atlanta Falcons intern coach Lance Schulters works at Bank of America Stadium in Charlotte, NC, on Sunday, Nov. 17, 2019. Schulters faced a dilemma when his decade as an NFL player was ending. Schulters knew he wanted to continue in the game, possibly in coaching. The problem: He was told to basically start from scratch, sort of like a proven chef being told to work the grill at McDonald's. (Kara Durrette/Atlanta Falcons via AP)

Lance Schulters faced a dilemma when his decade as an NFL player was ending.

Schulters knew he wanted to continue in the game, possibly in coaching. The problem: He was told to basically start from scratch, sort of like a proven chef being told to work the grill at McDonald's.

“Why do I have to do that, like go back to college or high school ... why have to start from the bottom if I have the knowledge already from playing for 10 years? Why go through that grunt work?" he asks.

Then Schulters was introduced to the Bill Walsh Diversity Coaching Fellowship, now in its fourth decade of providing opportunities for minorities. The fellowship program’s objective is to use NFL clubs’ training camps, offseason workout programs and minicamps to give coaches opportunities to observe, participate, gain experience and, ultimately, get a full-time NFL coaching position. All 32 NFL clubs participate each year.

“I think the impact of the Bill Walsh Coaching Fellowship is amazing because it has opened up so many opportunities for so many coaches that otherwise may not have gotten them, especially coaches of color," says Washington's Ron Rivera, one of six minority head coaches in the league now that Raheem Morris (Atlanta) and Romeo Crennel (Houston) are interims. "The thing that I really appreciate about the Bill Walsh Fellowship is that by getting the opportunity that I was given, I earned everything I’ve gotten from that point other than getting the Bill Walsh opportunity.”

Steelers coach Mike Tomlin and former NFL head coaches Lovie Smith and Marvin Lewis came out of the program, too.

“The Fellowship is a critical avenue for minorities to gain experience and exposure,” Tomlin explains. “And not only short-term experience and exposure, but long term. The fact that the program is now for the entirety of the season I think is really beneficial to growth. We talk about network a lot, but the actual growth and the vocation of coaching and the exposure that you get over the course of that length of that season is invaluable.”

Schulters spent time coaching in Seattle and now is a defensive assistant with the Falcons.

“The Bill Walsh Fellowship gave me the chance to be at the level I want and learn from the guys at the top level,” says Schulters, "and take info from them to better myself, and that is how I approached it.

“This provides us with more opportunities to get into the business of coaching as minorities. A chance to continue to get our foot in the door where the place might be shut otherwise.”

The Walsh project, inspired by and named after the Hall of Fame coach of the 49ers, is supplemented by a similar program for minorities seeking to enter football front offices.

Since 2015, the Nunn-Wooten Scouting Fellowship Program has served to expose former NFL players, as well as college recruiting and personnel staff, to careers in pro football scouting. The fellowship provides participants access to NFL club business and the skills needed for a career in NFL scouting.

Buffalo has two of its graduates on staff: RJ Webb, a scouting assistant at the Bills’ offices, and Keith Jennings, the team’s representative in the BLESTO scouting service. They took divergent routes to get where they are, but without Nunn-Wooten —named after Bill Nunn, a former Steelers scout and executive nominated for election to the Pro Football Hall of Fame in 2021, and John Wooten, chairman of the Fritz Pollard Alliance Foundation — who know where they would be?

“As a former player, I spent my last year in the league on IR and trying to soak in as much as you can,” Webb says. “You kind of start looking at how things unfold and rosters are made and that kind of took up my interest when I with the Panthers in 2013.

“In 2014, I did medical device sales but football always was on my mind.”

He found his way to the Nunn-Wooten fellowship, applying for and getting a scholarship. After finishing the program, it was suggested that Webb reach out to the Bills because he was in Carolina with Sean McDermott, now the Buffalo coach. Current Bills general manager Brandon Beane responded.

“Brandon Beane emailed me back in about four minutes and said their assistant GM would call me and they wanted me to come in,” Webb says. "He asked, `Can you let me know by the end of the day?′ I said, `Absolutely. I am in.' "

And he was, displaying the cachet the Nunn-Wooten program carries in the NFL.

Jennings, a tight end for eight seasons, mostly with Chicago, took a different path that led him to the fellowship.

“When I retired from the Bears (in 1998), I went into the business world, and I was sort of done with football,” Jennings says. "And then I moved back to Clemson after being in the business world, and after speaking with a lot of the football players and telling them how important education was, I felt like a hypocrite. So I went back to college to get my degree in business.

“When I was playing in the NFL a lot of scouts would talk to me about a lot of players and it sort of piqued my interest in what they were doing. I knew I didn’t want to coach. But I was interested in the scouting business.”

He was accepted for a Nunn-Wooten scholarship and it led to Beane hiring him for the Bills.

“When you get these fellowships, well, I needed a path for myself," Jennings says. “You just wanted to get in the door, and sometimes when you get in the door, it doesn’t mean you will be getting the jobs. Those guys at the Bills were there when I was coming through (the door). I would ask them things, always call them, and one thing I didn’t want is to be out of sight, out of mind. I was always asking, `How can I help?' And then I did.

“But it is tough to get the seat at the table.”

Tough but hardly impossible, thanks to the Walsh and Nunn-Wooten projects.