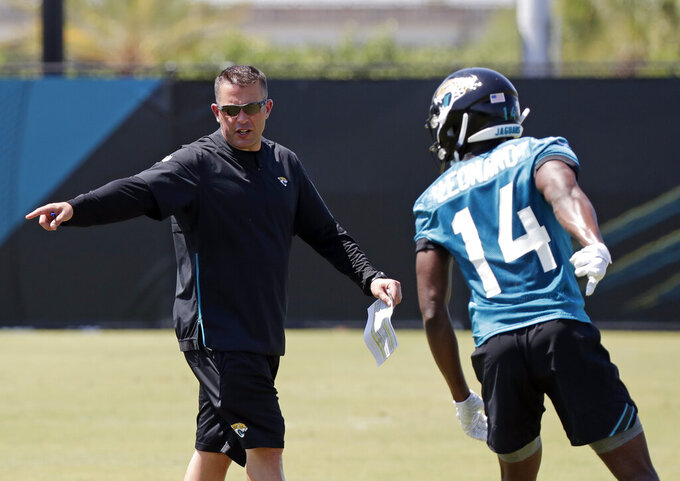 Now, after going their separate ways, they've reunited in Jacksonville and taken on the challenge of turning one of the NFL's most anemic offenses into something special.

Foles and "Flip" hope to make the Jaguars a contender again.

"Whether we won a Super Bowl or not, I would like to think that our friendship would be strong no matter what," DeFilippo said Thursday. "We kind of see stuff the same way, see life the same way, so it's easy."

Foles, the quarterback, and DeFilippo, his position coach, helped the Eagles win it all during the 2017 season.

"It wasn't one of those things where I was standing on a table or recruiting or anything like that," DeFilippo said. "But I was definitely involved in the process."

DeFilippo might have as much to prove as Foles, who has yet to start more than 11 games in any of his seven NFL seasons.

Minnesota parted ways with DeFilippo in mid-December, reportedly for failing to commit to the ground game.

"I'm kind of where my feet are at the present time," DeFilippo said. "That's how I have handled life. That's how I've handled my journey in the NFL, both in my ups and downs. There have been a lot of both, and I think that's the nature of the NFL in today's world. I'm not going to sit here and do some of the things and handle some of the things here the way they were handled up there. That is just not how I operate."

The 41-year-old DeFilippo spent less than a year with the Vikings. Minnesota hired him after two seasons in Philadelphia, where he was praised for his work with Foles and Wentz.

"We have gone through so much together," Foles said. "We know each other's personalities. He knows how I like to play the game, what my tendencies are. We know how to work together. When you go into a new team, it is not always that way where you are familiar with someone. I am really familiar with Flip, so I'm excited about that."

Jacksonville could benefit the most from the reunion.

The Jags ranked 27th in yards and 31st in points in 2018. They blamed much of the drop-off on injuries, with receiver Marqise Lee, running back Leonard Fournette and a number of tight ends and offensive linemen missing significant time.

Inconsistent quarterback Blake Bortles was unable to pick up the slack. Foles has shown more passing prowess as a backup, and Jacksonville gave him a four-year, $88 million contract to be the unchallenged starter.

The Jaguars drafted Foles a little help by selecting right tackle Jawaan Taylor in the second round and tight end Josh Oliver in the third. But they're counting on him — along with DeFilippo — to make the biggest difference on that side of the ball.