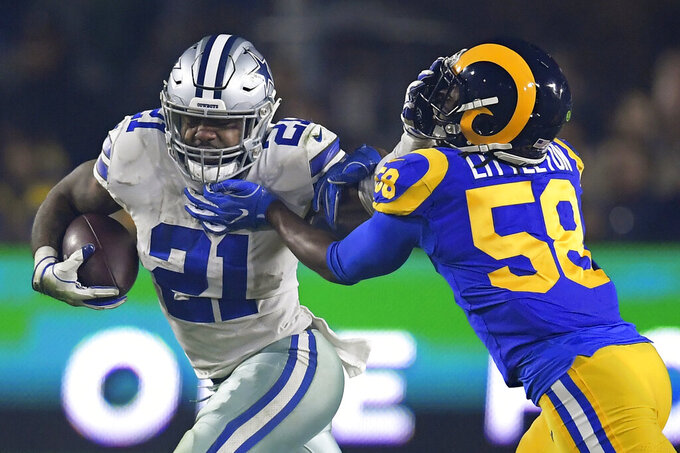 FILE - In this Jan. 12, 2019, file photo, Dallas Cowboys running back Ezekiel Elliott pushes off Los Angeles Rams inside linebacker Cory Littleton during the first half in an NFL divisional football playoff game in Los Angeles. Elliott's holdout clouds the expectations for a franchise longing to return to the Super Bowl for the first time since the last of five championships nearly 25 years ago. The Cowboys have a fourth-year quarterback already with two NFC East titles in Dak Prescott, a receiver ready to show what a full season looks like in Amari Cooper and a defense with an established star in pass rusher DeMarcus Lawrence and two emerging ones in linebackers Jaylon Smith and Leighton Vander Esch. (AP Photo/Mark J. Terrill, File)

FRISCO, Texas (AP) — Ezekiel Elliott's holdout wasn't a topic when Jason Garrett addressed the Dallas Cowboys for the first time at training camp in California, or at least that's what the coach says.

Now that the Cowboys have held their first practice in preparation for the opener against the New York Giants at home Sunday and Elliott still isn't around, Garrett says the approach hasn't changed.

"Again, we're just focused on our football team now," Garrett said Monday on the fourth straight Elliott-related question to start his daily meeting with reporters. "We're going to practice at 10:45. It will be an hour and 15 minutes and we're going to go out and practice as well as we can. That's really where our attention is."

Similar questions could have been asked before any of the 15 practices in Oxnard, or the five at the team's facility in Frisco, and Garrett's answer would have been about the same.

But there's no doubting an increasing urgency, or the growing possibility that even if the sides reach a deal in the contract stalemate this week, it might not be in time for Elliott to contribute against the first of two NFC East rivals to open the season (Washington is the second).

The two-time rushing champion missing all of the preseason wasn't a huge deal because Elliott didn't play a single snap in the exhibitions last year either. Plus, the weekend before the opener did bring word that the sides were talking and perhaps getting closer to an agreement.

It's also worth noting that Monday's practice was a bonus session after players had the weekend off following the preseason finale. The regular-season routine kicks in now, with Tuesday off before what will normally be the first full practice Wednesday.

If Elliott and the Cowboys haven't worked out their differences by then, the chances of him playing Week 1 drop considerably. The fourth overall pick from the 2016 draft has two years left on his rookie deal, at $3.9 million this season and $9.1 million in 2020.

The former Ohio State star wants to be the NFL's highest-paid back a year after Todd Gurley of the Los Angeles Rams set the standard with a $57.5 million, four-year contract with $45 million guaranteed.

Judging by reaction in the locker room, Elliott's teammates were still behind him on the 39th day of his holdout.

"He's not just a teammate, he's family," offensive lineman La'el Collins said. "Having that kind of guy around, that personality, it brings everybody up. I don't know another guy with as strong a look in his eyes as Zeke. You feed off that."

Rookie Tony Pollard, a fourth-round pick out of Memphis, had a strong preseason and is set to be the starter if Elliott doesn't show up. Alfred Morris, the primary replacement during Elliott's six-game suspension two years ago, is the backup after rejoining Dallas early in camp.

"We're going to have to play with what we've got," right guard Zack Martin, a Pro Bowler each of his first five seasons, said last week. "And what we've got is a damn good back in Tony Pollard. Obviously you'd want him out here, but we're preparing to get ready for Week 1."

Owner and general manager Jerry Jones has taken an increasingly hardline stance publicly on Elliott's absence. It started with a light-hearted "Zeke who?" response to a reporter's question after another strong showing by Pollard in the second preseason game in Hawaii.

After backlash from Elliott's representatives over that remark, Jones wasn't smiling a few days later when he said he had earned the right to joke with Elliott. Jones was strongly supportive of his running back — and upset with Commissioner Roger Goodell — in the legal dispute over domestic violence allegations that were the basis for Elliott's suspension.

On his most recent radio show last week, Jones finally brought up the fact Elliott wasn't honoring his contract. But that was about the same time the sides started talking again.

"We were negotiating and have been negotiating all the way up until we play the Giants and that's preparation," Jones said after the preseason finale last week. "That's a part of posture, that's a part of dialogue, discussion, conjecture, it's everything that has to do with words. But when we kick off and don't have our player, then we have to play without any given player."

That time is drawing near.

NOTES: Martin (back), WR Amari Cooper (foot) and LT Tyron Smith (back) returned to practice Monday after missing most of the preseason. All are expected to play against the Giants. ... The Cowboys released LB Rolando McClain three days after the NFL reinstated him from an indefinite suspension over the substance-abuse policy. The Cowboys put McClain on the reserve/suspended list when he was banned in 2016. The 30-year-old last played in 2015.