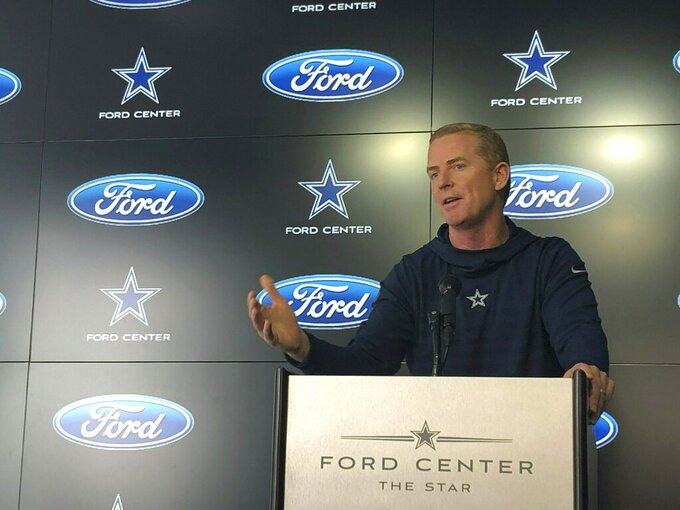 The first was on his morning radio show, when Garrett responded, "I do," when asked if he thought Linehan would be back for a sixth season with the Cowboys. The coach added he didn't expect any significant changes to his staff.

At a news conference several hours later, Garrett wasn't even close to definitive. He said discussions about the coaching staff hadn't happened after spending most of his time in player interviews coming off the 30-22 divisional playoff loss to the Los Angeles Rams on Saturday.

In between, executive vice president of personnel Stephen Jones said on his radio show that it was too early to speculate about the future of coaches or players.

While Garrett quieted chatter about his own future by rallying the Cowboys from a 3-5 start to a wild-card win and their third divisional trip in the past five seasons, he didn't do much to show he was in sync with owner and general manager Jerry Jones or Jones' son in his season-ending meeting with reporters.

"I don't know how I answered that question this morning," Garrett said. "Nothing has changed. I feel very good about what Scott Linehan did for us. We'll have conversations about everybody as we go here the next few days. We'll make a lot of decisions to put the staff together and put the team together as we go."

Garrett said he considers all the decisions about the team — coaching staff or otherwise — to be collaborative. But he reiterated that Jerry Jones has the final say.

"I do believe our relationship is very collaborative," Garrett said. "I have a tremendous amount of faith and trust in him and hopefully he has the same for me. We talk about all the decisions we make, any player, any coach, and we come to conclusions with both feel good about."

Linehan was heavily criticized during Dallas' sluggish start because a misfiring offense was largely to blame. There were questions about creativity, including from Hall of Fame quarterback-turned-analyst Troy Aikman, who won three Super Bowls with the Cowboys in the 1990s.

Dallas was much better offensively in the second half of the season, after sending its first-round pick in this year's draft to Oakland for receiver Amari Cooper. But the Cowboys were one of just four teams to convert fewer than half their trips inside the 20-yard line into touchdowns.

When Dak Prescott and the Cowboys were struggling, there were also questions about inexperience with first-year quarterbacks coach Kellen Moore, who retired after being Prescott's backup and went straight into the role of leading that group.

"If you look at the success he's had, the number of games he's won as a starting quarterback in the NFL over the course of his first three years, it's a good environment," Garrett said. "I think Scott and Kellen, those guys have a good understanding of what his strengths are and again some of the things he needs to work on."

After the loss to the Rams, defensive coordinator Rod Marinelli bristled when asked if he was considering retirement. The 69-year-old Marinelli said before the LA game that he was willing to help the Cowboys try to keep passing game coordinator Kris Richard.

The Associated Press has reported that Miami intends to offer the job to New England defensive coordinator Brian Flores , but hasn't ruled out Richard if the club can't reach a deal with Flores. Garrett said he's hopeful Richard will be back for a second season in Dallas.

The contracts of Garrett, Marinelli and Linehan are up after next season, although Jerry Jones has hinted at an extension for Garrett, his coach for 8½ seasons. Dallas has lost six straight divisional games since the franchise's fifth Super Bowl title following the 1995 season.

"I know certainly overall it was a good season, but we also know that we've had some good teams around here that haven't taken the next step," Stephen Jones said. "We've got to figure out what that is."