Goff rebounds for Rams but can’t top Wilson and Seahawks 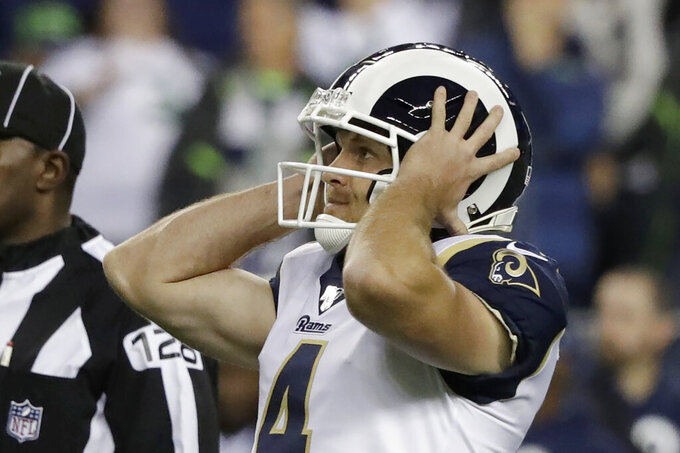 Los Angeles Rams' Greg Zuerlein reacts after he missed a field goal in the final seconds of the team's NFL football game against the Seattle Seahawks, Thursday, Oct. 3, 2019, in Seattle. The Seahawks won 30-29. (AP Photo/Elaine Thompson)

SEATTLE (AP) — Jared Goff didn’t have long to let the mistakes of last week linger. In that way, playing on a short week was a benefit for the Los Angeles quarterback.

And if Greg Zuerlein’s 44-yard field goal attempt in the closing seconds hooks just slightly to the left, the narrative around Goff and his team is likely far different.

As it stands, the Rams have lost two straight after falling 30-29 to the Seattle Seahawks on Thursday night. But it was Goff who put the Rams in position to have a chance at getting out of Seattle with an unlikely victory, and not just because of what he did in the final 90 seconds.

Goff finished 29 of 49 for 395 yards and one touchdown against the Seahawks just days after throwing for a career-high 517 yards and tying an NFL record with 45 completions in a loss to Tampa Bay. He was maligned after the loss to Tampa Bay for his three interceptions and one fumble lost to go along with all the yards thrown.

There weren’t any fumbles this time. The only interception bounced off the hands of his intended target. And Goff changed the momentum of the game with a key touchdown drive late in the first half. He wasn’t perfect and was ultimately outplayed by Seattle’s Russell Wilson. But it was more reminiscent of what Goff did a year ago.

“It didn't all come down to that kick, there are a lot of plays that we could have done better. ... There's a million things that could have gone differently to change that game, you learn from them and you move forward,” Goff said.

Goff helped change the course of the game on the final drive of the first half after Seattle’s Jason Myers missed a 48-yard field goal attempt. Goff hit four straight passes, capitalized on a roughing-the-passer call, and capped the drive with a 9-yard TD toss to Cooper Kupp. Suddenly a game Los Angeles felt Seattle controlled was only a 14-13 lead at halftime.

Goff continued to roll into the second half. He led touchdown drives on two of three possessions in the third quarter, and Zuerlein’s 36-yard field goal with 9:19 left gave the Rams a 29-24 lead.

“We were ready to go on offense most of the second half,” Goff said. “We had some things that didn't go our way, where we didn't finish drives, but we were moving the ball really well. Knew what they were doing defensively, had some pretty good plays for it.”

Goff’s lone mistake came with 2:28 left when his pass for Gerald Everett deflected into the hands of Seattle safety Tedric Thompson. The Rams defense held and Goff got one more chance, taking possession at his own 7 with 1:38 remaining.

He was nearly flawless. Goff hit five of his first six passes, the big blow being a 28-yard completion to Everett to the Seattle 30. The Rams stalled and had to settle for Zuerlein’s attempt that stayed out to the right and never hooked to the middle of the uprights.

Goff was 27 of 42 for 371 yards over the final three quarters. He isn’t worried about where the Rams go from here. They’ll have another big divisional matchup next week against San Francisco.

“We've been 3-2 before, that was two years ago, if I remember correctly. The Patriots were 3-2 last year and they won the Super Bowl. So there's a lot of game left,” he said. “We have a good group of people in there. We're going to bounce back, we're fine. Obviously you don't want to lose two in a row at any point, but we have another big divisional one next week so we have no time to waste.”