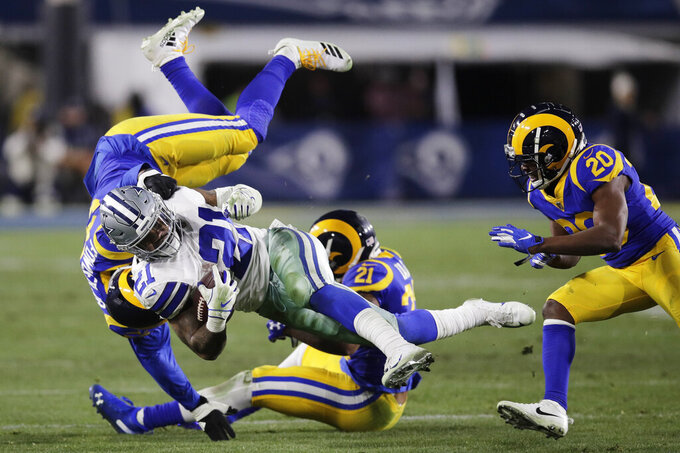 LOS ANGELES (AP) — The Dallas Cowboys advanced to the divisional round of the playoffs on the strength of their running game and run defense. On Saturday night, it proved to be their downfall.

The Cowboys allowed their most rushing yards in a postseason game, while Ezekiel Elliott was held to 47 yards in a 30-22 loss to the Los Angeles Rams. It was the sixth straight loss in the divisional round for Dallas, and it has not reached the NFC championship game since 1996.

"We did not do a good enough job defending the run, obviously," coach Jason Garrett said. "They were also committed to stopping our run. They had a lot of people around the line of scrimmage and that's what they were going to do."

The epitome of the Cowboys' ground game woes on both sides came in the fourth quarter.

Dallas was down 23-15 and on the Rams 35 when Elliott was stopped for no gain on fourth-and-1. Los Angeles then went on a 12-play, 65-yard touchdown drive where all but two plays were runs. The drive was capped off by a 1-yard score by C.J. Anderson.

"They dominated us up front, we didn't get any movement," said Elliott about the fourth-down play.

Quarterback Dak Prescott said that stop thwarted any momentum the Cowboys had after being down 23-7 midway through the third quarter.

"We didn't get it done on fourth down and that changed the game right there. We weren't able to execute when we needed to and it hurt," he said. "Had we made it, we still would have a nice balance running and passing and we wouldn't have had to drop back on every play."

Dallas allowed only 73 yards in its wild-card round victory over Seattle, who came in with the NFL's top-ranked rushing attack. The Cowboys didn't have the same success against the league's No. 3 rushing team, surrendering 273 yards. The old mark was 269 against the Rams in 1986 as Eric Dickerson ran for 248 yards.

On Saturday, it was two backs that gave the Cowboys problems as Todd Gurley (115) and Anderson (123) averaged 6.1 yards per carry. It marked the first time two running backs have had 100-yard games against the Cowboys in the postseason, and the first time it has happened to them in any game since Baltimore in December 2008.

The Rams did it behind a dominant game from the offensive line, with left tackle Andrew Whitworth leading the way by winning his matchups when paired up against defensive ends DeMarcus Lawrence and Randy Gregory.

"I don't think they outmuscled us, it was a combination of things. We didn't get upfield as well as we usually do," defensive end Tyrone Crawford said.

The Cowboys' running game also struggled. Elliott averaged just 2.4 yards on 20 carries. It marked the first time in three postseason games that the third-year running back was held under 100 yards.

Prescott had a rushing touchdown in the fourth quarter, but wasn't used on any designed runs until late in the game, when Dallas was down by two scores. Prescott said he wasn't surprised about that while Garrett said most of the run-pass option plays called resulted in handoffs.

The Rams came in ranked 23rd in run defense during the regular season, and had allowed 98 yards or more in 10 straight games. The 50 yards allowed marked a season low and the second-fewest since former Cowboys coach Wade Phillips became defensive coordinator in 2017.

"We played against a real good front," Elliott said. "You guys kept asking me about stats and 5.1 yards per carry (allowed by the Rams) and I told you its playoff football and none of that (stuff) matters anymore. They came out and played better than us tonight."