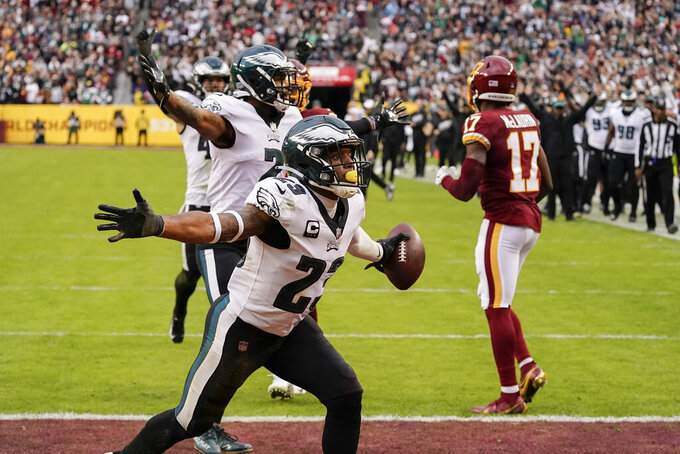 Philadelphia Eagles safety Rodney McLeod (23) celebrates his interception of a pass thrown by Washington Football Team quarterback Taylor Heinicke (4) near the end of during the second half of an NFL football game, Sunday, Jan. 2, 2022, in Landover, Md. Philadelphia won 20-16. (AP Photo/Alex Brandon)

Then he threw an interception that made the team's playoff hopes disappear.

Heinicke started hot, completing 14 of his first 17 passes and staking Washington to a lead at halftime, but he was picked off by Eagles safety Rodney McLeod with 24 seconds left to end the comeback bid. The moment McLeod came down with that ball, Washington's already faint postseason chances were over.

The Eagles sacked Heinicke three times, but they could have had more if not for his ability to slip out of the pocket and find open receivers. Heinicke had a 10-yard run and completions of 24 yards to tight end John Bates and 25 to rookie receiver Dyami Brown.

“Did you see some of the throws Heinicke was making early in that game, getting away from the pressure that we were getting on him?” Sirianni said. “The guy was playing good, so I felt like in those scenarios we had to be aggressive.”

Washington coach Ron Rivera, who broached the possibility this week of backup Kyle Allen getting some playing time before the season was over, did not have any issues with Heinicke's performance. He also thought there should have been a penalty on Philadelphia's Anthony Harris that would have negated the interception.

“I thought Taylor was sound,” Rivera said. “I think he did some good things. I thought he gave us a chance.”

After Washington led 16-7 at halftime, Heinicke and the offense sputtered in the third quarter. The team's only two punts of the game came that quarter, including a three-and-out on the possession after the Eagles' 7:39-long drive to cut it to 16-14.

It only snowballed from there, with the Eagles holding on to the ball for almost 10 minutes in the third quarter.

“When they get the ball first and they go down for seven and a half minutes, defense is tired,” Heinicke said. “It's tough on them. The third quarter we had the ball for like, what, maybe 45 seconds? So, it was tough."

Coming off a 56-14 loss at Dallas that was the organization's worst in more than a decade, Washington was playing without top running back Antonio Gibson, left guard Ereck Flowers and right tackle Sam Cosmi because of COVID-19 protocols.

Add the absence of injured tight end Logan Thomas and things have gone off the rails for Washington, losing four in a row after a four-game winning streak.

“It's been a rough stretch, but guys have battled,” Heinicke said. “You see us fighting out there, just come up a little short every time.”

Washington also got a scare when new starting tight end Ricky Seals-Jones collided with a camera operator on the sideline and injured his neck. Rivera said Seals-Jones was walking around at halftime and doing OK after being put on a stretcher and carted off.

“The good thing is he was moving his arms and legs and that's what you want to see,” Heinicke said. “Supposedly he had a little tingle in his fingers, so they are pretty cautious about that. But hopefully everything's all right.”