Incognito wants to 'rewrite the ending' in return to NFL 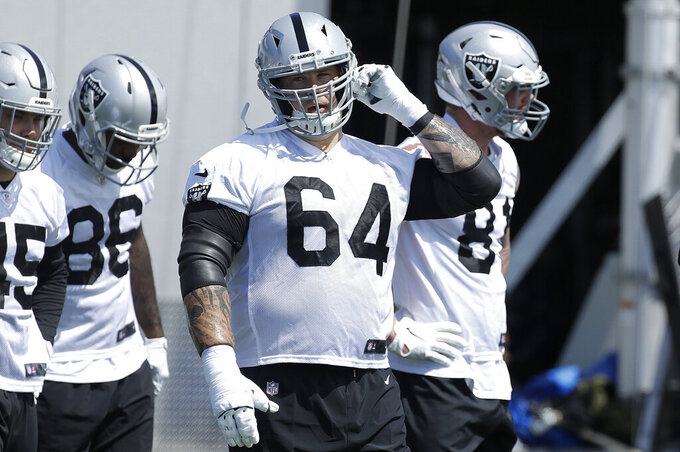 FILE - In a Tuesday, May 28, 2019 file photo, Oakland Raiders guard Richie Incognito (64) warms up during an official team activity at the NFL football team's headquarters in Alameda, Calif. Incognito's ability on the field has helped him earn another chance.(AP Photo/Jeff Chiu, File)

NAPA, Calif. (AP) — After several suspensions, accusations of racism and bullying, and run-ins with police off the field, Richie Incognito didn't know if he'd ever get another chance to play in the NFL despite being a four-time Pro Bowl guard.

Incognito retired following the 2017 season to deal with his issues, He quickly realized he missed the game and began working to get back in shape so he could play again — if the opportunity arose.

It took until this spring for the Oakland Raiders finally to give him that chance on what general manager Mike Mayock described as a one-year "prove-it deal" for Incognito to show he can thrive both as a player and a person.

Incognito's career has been filled with several highs, including his play on the field as a dominant blocker with the type of mean streak coaches often crave from their offensive linemen. But that nastiness often served as a detriment and Incognito acknowledges having many "dark days" along the way when he was unable to control his inner demons.

Incognito was suspended multiple times in college; banned in the NFL for bullying teammate Jonathan Martin in Miami in 2013; accused of making racist slurs to Jacksonville defensive end Yannick Ngakoue during a playoff game in January 2018; and had multiple run-ins with police since he retired following the 2017 season.

In May 2018, police in South Florida placed Incognito in a mental hospital after he allegedly threw weights and tennis balls at gym employees and another patron, and told officers the government was spying on him.

Incognito was arrested in August 2018 in Arizona on charges he threatened to shoot employees of a funeral home. A police report showed officers later executed a search warrant on Incognito's pickup truck and seized two Glocks, three rifles and a silencer for a handgun.

He pleaded to disorderly conduct in that case in April and has been suspended two games for violating the NFL's personal conduct policy in a punishment the Raiders anticipated when they signed Incognito earlier this offseason.

"They wanted to know how they could help me, how they could help me adjust," Incognito said. "They were there with open arms. They've been great about it. We've been in constant communication, we have a team around me, and we're just making sure I'm checking all the boxes and holding up my end of the bargain. That's why it's great. It's great to get out here. I've checked all the boxes, done everything right and necessary to get out here and earn the opportunity to get back with the team."

Incognito's ability on the field has helped him earn another chance. He made the Pro Bowl all three seasons in Buffalo from 2015-17 when he was considered a team leader.

The Raiders are hoping to get that kind of production when he returns for Week 3; the 36-year-old Incognito is being counted on to replace Kelechi Osemele at left guard and help take pressure off second-year tackle Kolton Miller.

Despite not playing all last season, Incognito impressed the Raiders in the offseason when he worked out with the team and has continued to do that at practice after he arrived. Coaches immediately put him in with the first-team unit.

"I'm not far behind," he said. "I feel like I'm still in good shape. I feel like I can still play with good technique and still play at a high level."

But that has never been the question around Incognito. Keeping his mind straight has been, and he hopes he's in better position to do that now.

"The big thing for me is just being man enough to ask for help when I need it," he said. "For so many years, I've just tried to grit my teeth and work hard and kind of grind my way through this. You've obviously seen I've had my setbacks and dark days. But I'm focusing on those positive days and building some momentum to go right through the season."