Jags' Lawrence gets 'plus, plus' grades, 'real stuff' next 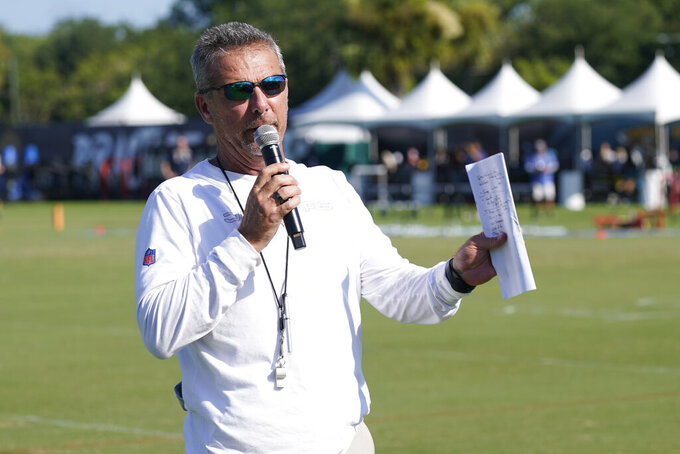 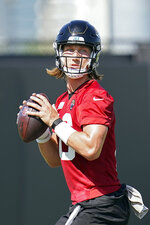 JACKSONVILLE, Fla. (AP) — As impressive as Jacksonville Jaguars quarterback Trevor Lawrence was during his first week of training camp, his performance came with an asterisk.

“Everybody’s got to remember the defense is not allowed to make a play on the ball right now,” coach Urban Meyer said Saturday.

While Meyer was pleased with everything the No. 1 overall draft pick did during four practices without pads, a better assessment will come next week when Meyer unleashes his defenders and starts the “winners and losers” phase of camp.

“All you can evaluate now is retention and skillset. Plus, plus,” Meyer said. “The real stuff starts next week.”

Despite outplaying Gardner Minshew daily, Lawrence will continue splitting first-team reps with the third-year pro who has a 7-13 record in 20 career starts in Jacksonville. Meyer said competition is “alive and well” at every position, including quarterback, and he plans on charting every aspect of every drill in hopes of taking the subjectivity out of roster decisions.

“It’s not fair to a player to not have objectiveness in there,” Meyer said.

Lawrence welcomed Meyer’s move even though it’s rare for the former Clemson star to work with the second-team offense or have to earn the starting job.

“That’s how you have to (do it),” said Lawrence, who last shared first-team reps with Kelly Bryant as a freshman at Clemson. “It has to be a competition. Nothing can be given. When you start giving things to people, you set the wrong precedent for the team.

“I have a lot of respect for the coaches, the way they’ve handled everything, and my job’s just to come in every day, go to work and try to make this team better. … Right now, I’m just doing my job.”

Lawrence’s job has been easier with an upgraded receiving corps, one aided by Meyer’s hands-off policy for defenders for the first week of camp. Marvin Jones, DJ Chark and Laviska Shenault have given Lawrence plenty of options, quickly establishing themselves as the most talented and deep position group in Jacksonville.

They started building a rapport during organized team activities in May and June and then got together again in mid-July for a relationship-building trip to South Carolina. They spent two days working out at Clemson and took a boat trip together.

“I think it helped us a lot,” Lawrence said. “We got back into it really quickly when we started camp. We didn’t have to take two, three days to get our timing back.”

After a slow start to the offseason – Lawrence had surgery to repair a torn labrum in his non-throwing shoulder in February and then was hampered in OTAs with a strained hamstring – he has looked every bit as advertised to start camp. Teammates are raving about his arm, his mobility, his touch on deep passes and his command of the huddle.

“On the sideline and watching and going back on film, that’s when I can really see,” pass rusher Josh Allen said. “I can see the development. I can really see the growth that he has already made in the first couple of months. It’s crazy just to see him when the season comes. I think the sky’s the limit for that guy. I love it.”

Lawrence had a few hiccups Saturday, all of them in the 2-minute offense. He’s still adjusting to NFL clock-management rules.

“I’m a lot further than I was in the spring, so I feel confident in what I know,” he said. “There’s just so many little details. I don’t know if I ever can say, ‘I know it all.’ You’re always learning. I definitely have some more to learn.”

NOTES: The Jaguars signed WR Jeff Cotton, who spent last season on the Los Angeles Chargers practice squad. Cotton provides some much-needed help at a position that’s missing Jamal Agnew, Josh Hammond, Tim Jones and Josh Imatorbhebhe. … Meyer said TE Tim Tebow has shown “good hands,” but added that the 2007 Heisman Trophy winner needs to work on catching balls away from his body. “He is fighting through that a little bit, but he has the skillset to catch the ball.” … DE Taven Bryan, who opened camp on the non-football injury list, had an off-the-field accident that Meyer said was “no one’s fault.” Meyer expects Bryan back soon.