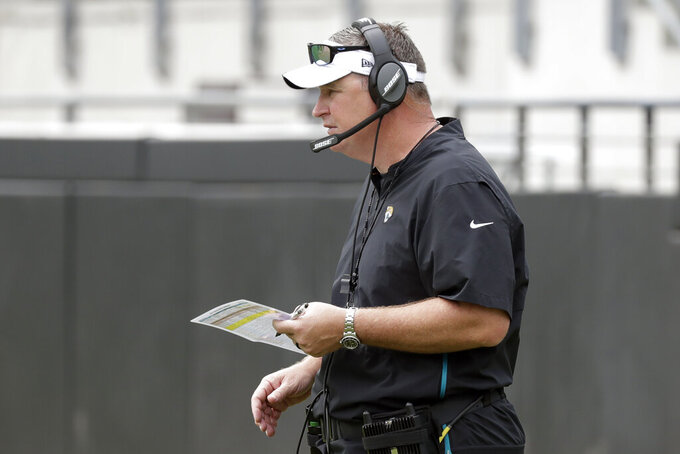 OWINGS MILLS, Md. (AP) — A year ago, the Los Angeles Rams joined the Baltimore Ravens for a couple of training camp practices before opening the preseason with a game in Baltimore.

From there, the Rams went on a journey that took them to the Super Bowl.

The Jacksonville Jaguars can only hope to follow a similar path.

"That's not why we're here, but if it happens we'll take it," Jacksonville coach Doug Marrone said Monday before the Jaguars and Ravens held the first of two daily joint practice sessions.

The main reason the Jaguars arrived in Maryland well in advance of Thursday's preseason opener was to get some quality work against outside competition.

"You get a greater evaluation of your team," Marrone said. "Our focus isn't the players for the Ravens; we're trying to figure out who's going to be on our team. We think this is a great opportunity to do this. It also helps with the quarterback. You're getting him a lot of good reps in a controlled environment, where you don't have to worry about him getting hit."

Signed as a free agent during the offseason, Nick Foles looked sharp during the 2½-hour practice while competing against a Baltimore defense that last year was ranked No. 1 in the NFL.

"It's always exciting to go up against another team, especially one as talented as Baltimore," Foles said. "I thought both sides handled it really well. Offensively we were efficient. We got to work a lot of different situations against them, which was awesome."

The Jaguars reached the AFC Championship game two years ago before fading badly last season. With Foles calling the shots, expectations are high again in Jacksonville.

"It gives us more confidence, but you can't expect good things to happen if you don't put the work in," defensive end Calais Campbell said.

A joint practice enables the teams to go hard at each other with less chance of injury as in a preseason game. Rarely did a play end with the runner on the ground, and all the quarterbacks went virtually untouched.

After burning Ravens defensive backs over the past couple of weeks, Lamar Jackson went up Jacksonville's defense for much of the afternoon. He won't see nearly as much action on Thursday night.

Jacksonville's James Onwualu had to be carted off the field after being injured on a kickoff drill, but that appeared to be the only casualty of a practice that was without a scuffle. There are times when the combination of heat, helmets and competition results in fighting, but not this time.

"We met with the leaders of both teams and we talked about it," Marrone said. "There's no need for that in our game."

No, this was just a chance for the Ravens and Jaguars to go up against guys wearing a different color uniform.

"Them as much as us, you get tired of going up against your own guys," Ravens cornerback Marlon Humphrey said. "It's good to see where you're at, going against another team."

All of the benefit of a preseason game, without much of the risk.

"I think this is actually better because you're getting good work, but you're taking a step back," Humphrey said. "You basically get to play in the game but take a step back instead of hit the guy."

Pads were popping, but at the end of the play it was nothing more than touch football.

"It wasn't a physical practice. It was tag-off, which is good and fine," Harbaugh said. "It was a good, fast practice. We're going to look at the details — the footwork, the angles, the hand placement, the assignments, the eyes, the communication — all those things when you're going against another team that you're not used to."