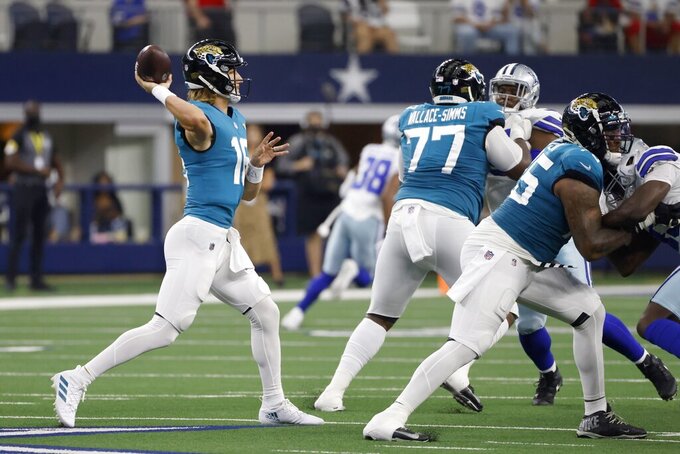 JACKSONVILLE, Fla. (AP) — Rookie quarterback and No. 1 overall pick Trevor Lawrence was voted one of Jacksonville’s seven team captains for the season.

Coach Urban Meyer unveiled the list during a team meeting Wednesday by showing a 3-minute video featuring friends and family members breaking the news to the newly crowned captains. Meyer then presented each player with a teal jersey that had a C sewn on the front.

“It was great,” Lawrence said. “It’s a really cool feeling, especially as a younger guy just having that support from my teammates. Being named a starter and now a captain, nothing changes. Same expectation and now it’s time to go out there and win some games.

“But I’m really excited. It’s definitely an honor. It’s a cool moment for me to be named a captain with those other guys, just a bunch of great guys in the locker room. We had a ton of guys that got votes but definitely really cool.”

The Jaguars open the season at Houston on Sunday.

Jack was the top vote-getter, Meyer said, adding that Lawrence was third.

“I was impressed he was up there, I want to say third in vote gets,” Meyer said. “That’s a credit to him.”

Lawrence is the third rookie quarterback in the past two years to be named a captain, joining Cincinnati’s Joe Burrow and Zach Wilson of the New York Jets. Burrow was the No. 1 pick in 2020, and Wilson was drafted second behind Lawrence in April.

Lawrence was voted a captain despite spending four months in a supposed quarterback competition with two-year starter Gardner Minshew. Minshew was traded to Philadelphia three days after Lawrence was named the starter.

“I guess it brings clarity to everything, but at the same time, there’s a ton of guys on our team that won’t have that C (on their jerseys) that are just as much a leader as me or anyone else,” Lawrence said. “That does mean something, but also there’s a lot of other guys that help lead this thing.

“We’re all in it together. No one person has to carry it all. … But definitely an honor and proud four sure.”