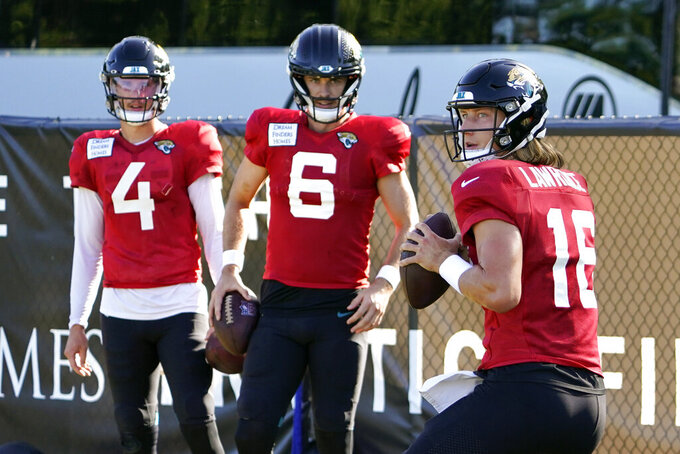 Coach Doug Pederson said Tuesday he gave Luton the nod over second-year pro Trevor Lawrence and backup C.J. Beathard. Pederson said Lawrence “has been getting a lot of great looks here in practice and we feel like he’s in a good spot.”

Beathard has been dealing with a groin injury since organized team activities in early June. He has been held out of all team drills through eight days of training camp.

So Luton will get the bulk of the work in the Hall of Fame game against Las Vegas, with journeyman Kyle Sloter expected to play some off the bench. A sixth-round draft pick by Jacksonville in 2020, Luton started three games as a rookie and threw a 73-yard touchdown pass on his third NFL snap. He completed 60 of 110 passes for 624 yards for Jacksonville, with two TDs and six interceptions.

The Jaguars had hoped to get him on their practice squad to start last season, but Luton signed with his hometown Seahawks days after final roster cuts. Luton was born and raised in Marysville, Washington. He played collegiately at Idaho and Oregon State, with a stop at Ventura College in between.

“Just excited to be back in a Jaguars uniform and get to go out and play with the guys,” Luton said. “I couldn’t be more fired up.”

Luton lauded Lawrence and Beathard, two guys he bonded with last year before landing back home in Washington.

“I love this quarterback room,” Luton said. "Trev and C.J. are my guys. When I left, I missed them. It was just a cool room to be around. We’re really good friends, so that helps. We’re all rooting for each other. We’re all pushing each other to be the best we can be.

“At the end of the day, we’re buddies. It’s a lot fun to be with them. In camp, we’re together all day long. It helps to be around guys you really like. They’re awesome.”

Pederson also ruled out second-year running back Travis Etienne, who missed his rookie season with a foot injury. Etienne has been one of the bright spots in camp.

“Right now, he’s done some great things in practice, and I just want to protect him a little bit,” Pederson said. “Just making sure that he’s 100% healthy as we get ready for the regular season. He’s going to be a big asset to the young running backs in this game and help those guys out.”

Rookie Snoop Conner and fellow running backs Ryquell Armstead and Nathan Cottrell are expected to get most of the work.