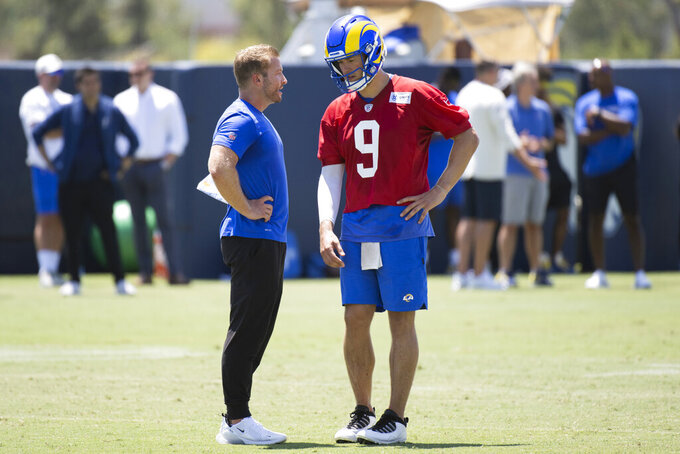 IRVINE, Calif. (AP) — Jalen Ramsey could have eased into training camp this summer. After a long, grueling season culminating in a Super Bowl title, the All-Pro cornerback could have rested his body and his surgically repaired shoulders during the Los Angeles Rams' 2 1/2 weeks at UC Irvine.

Instead, Ramsey was right in the middle of his teammates on the camp fields Monday. Although he isn't practicing, Ramsey is basically serving as another assistant coach, dispensing knowledge and tips to the Rams' younger defensive backs.

“I kind of know the playbook like the back of my hand, so that’s really why I carry the (play) script, so I can help the other guys,” Ramsey said.

“I know star, corner, whatever position in the secondary," he added. "So I can know exactly the play, so I can know the certain techniques that I feel like they should have been using, or to help them, if they got beat on the play, (understand) why they got beat. I can analyze it with them as soon as they come off the field, instead of me having to wait until we get to the meeting room.”

Ramsey's commitment to the Rams' overall success hasn't waned at all with a Super Bowl ring on his finger, as he made clear in his first extensive public comments on an eventful offseason.

Ramsey initially was expected to be on the physically unable to perform (PUP) list to start camp, which would have meant he couldn't practice. But the Rams changed course last weekend after realizing they wanted Ramsey on the field, and he was excited.

“I thought I was helping them by having me on PUP, just giving them a roster spot," Ramsey said. "So I was like, ‘Cool, I ain’t no puppy anyway, so let’s get it.’”

He demonstrated his commitment to the Rams last season while playing through persistent pain in his shoulder as Los Angeles won nine of its final 10 games on the way to a title. Ramsey earned his third career All-Pro selection along the way in recognition of his do-everything role specifically tailored to his formidable abilities on the Rams' defense.

Once the Rams finished celebrating, Ramsey immediately got back to work by evaluating his injuries and setting a self-imposed deadline to have surgery. He wanted to be fully healthy for Los Angeles' visit from the Buffalo Bills in Week 1, and he made his offseason decisions accordingly.

“I was hoping that certain things would heal on their own, giving it some time off and not reinjuring it every Sunday by hitting it, but it didn’t work out that way,” Ramsey said. “It just got to the point where it was just a little too yucky, a little too messed up in there. It just needed to be cleaned out and made new again.”

Ramsey and coach Sean McVay both expect the defensive back to be physically ready to face Josh Allen and the Bills. By taking an active role in training camp practices, Ramsey is doing his part to make sure his defensive teammates are ready to help him.

Los Angeles must identify a new starting cornerback during the preseason to replace Darious Williams, who got big free-agent money from Jacksonville after playing 80% of the Rams' snaps last season — more than any defensive player except All-Pros Aaron Donald and Ramsey. The Rams also must pick a starting nickelback, decide on two starting safeties after injury woes at the position last season, and prepare the four defensive backs drafted by the team last spring.

Ramsey is eager to help, both before and after he's back in uniform.

“I’ve got to stay strict on my rehab schedule, and just being smart about how I’m doing things and how I’m feeling,” Ramsey said. “Got to be a master of my body, honestly, and know what limits I can push and what limits I can’t push. But there’s no doubt in my mind I’ll be ready when the time is right.”