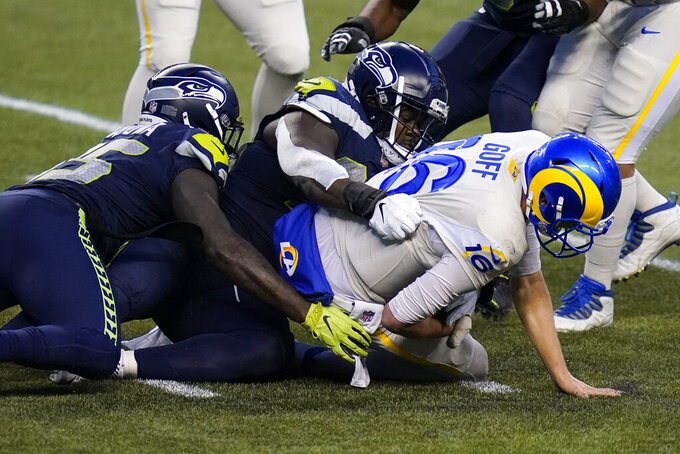 John Wolford will take his first NFL snaps as Goff's replacement when the Rams (9-6) host the Cardinals on Sunday. Los Angeles will clinch a playoff spot with a victory, or if the Chicago Bears lose to Green Bay.

“John has done a great job preparing himself all year,” McVay said. “You watch him work, and the way he’s prepared, I know there’s confidence in him with his teammates. He’s put himself in a good position where he could come in and lead the offense.”

The Rams also will be without leading rusher Darrell Henderson, who is headed to injured reserve with a high ankle sprain. Rookie running back Cam Akers may be able to return from his own high ankle sprain after missing just one game, McVay said.

Rookie Bryce Perkins will be in uniform as a backup quarterback Sunday, and Los Angeles also plans to re-sign veteran Blake Bortles, who spent last season as Goff's backup before moving this season to Denver, where he was on the practice squad.

Wolford has spent the past two seasons with the Rams after a solid season in the Alliance of American Football. The Wake Forest product was the third-stringer behind Goff and Bortles last season before moving up to the No. 2 job this year, but he hasn't played for the Rams.

“We feel great” with Wolford in charge, center Austin Blythe said. “We have the utmost confidence in John to go out and perform. It's still our offense. We're still going to call the same plays. Nothing is going to change from our standpoint (or) attitude-wise. It just comes down to execution.”

Goff hasn't missed a game due to injury in his five-year NFL career, sitting out just one game when McVay rested his starters in the 2017 regular-season finale. He injured his thumb when he hit his hand on the helmet of Seattle defensive end Benson Mayowa in the second half of the Rams' 20-9 loss to the Seahawks last Sunday.

Goff played the rest of the game with the injury, but had surgery to insert screws in his thumb on Monday. Goff had to be persuaded to have surgery instead of toughing it out this week, McVay said.

“He actually should be available, if we’re able to handle business, for the playoffs — which is pretty amazing,” McVay said. “You’ve got to make sure that sometimes you help make the decision or help paint a picture of why this is the smart thing for the longevity of your career, and not just be short-sighted.”

Wolford never got any action in his first 31 games with the Rams, but his coaches and teammates appear confident in his ability to handle a starring role. The 6-foot-1 Wolford, who is significantly smaller and more mobile than Goff, spends his weeks with the scout team impersonating the Rams' opponents' quarterbacks, from Kyler Murray to Jimmy Garoppolo.

“We've got a great guy in John Wolford,” running back Malcolm Brown said. “Not just me, but the entire team has confidence in him. I know John will be prepared for it.”

With Henderson out and Akers' availability uncertain, Brown is likely to be the Rams' featured back. Todd Gurley's longtime backup has shared carries in a three-man tandem in the Los Angeles backfield this season.

Undrafted rookie running back Xavier Jones also is likely to get a chance in the backfield, McVay said. Jones, an SMU product, made the roster out of training camp, but has played exclusively on special teams.

“He's a guy that's real shifty,” Brown said of Jones. “I haven't seen a lot of guys like him. One-on-one, you can bet on him making a guy miss. He can do everything. I'm pretty excited for him to get in the rhythm of things.”