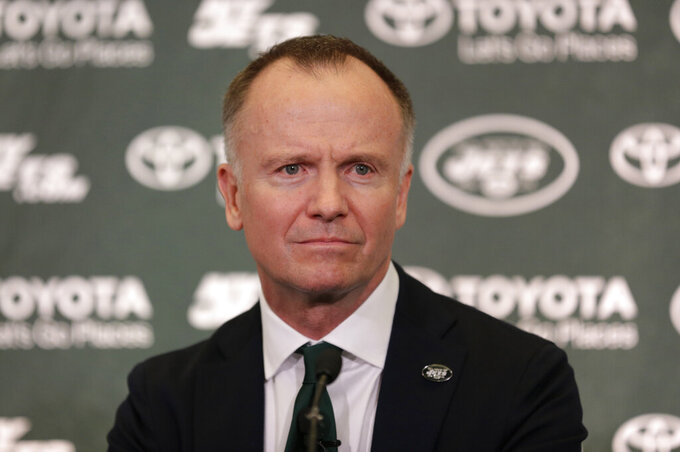 FILE - In this Jan. 14, 2019 file photo New York Jets owner Christopher Johnson participates in a news conference in Florham Park, N.J. Picture this: New York Jets owner Christopher Johnson parading around next winter with a certain Super Bowl bauble on his head. Sure, Johnson was dreaming about something his franchise hasn’t achieved since 1969: an NFL championship. But in March, optimism flows through everyone in pro football. “If we win the Lombardi Trophy,” Johnson said Sunday, March 24, 2019 before the league meetings begin, “I will wear it like a crown until people are sick of me. Can you take that off his head?” (AP Photo/Seth Wenig)

PHOENIX (AP) — Picture this: New York Jets owner Christopher Johnson parading around next winter with a certain Super Bowl bauble on his head.

Sure, Johnson was dreaming about something his franchise hasn't achieved since 1969: an NFL championship. But in March, optimism flows through everyone in pro football.

"If we win the Lombardi Trophy," Johnson said Sunday before the league meetings begin, "I will wear it like a crown until people are sick of me. 'Can you take that off his head?'"

It will take plenty for that visual to become reality, especially considering that the Jets finished 4-12 last season and then fired Todd Bowles , replacing him as coach with Adam Gase. New York has not made the playoffs since the first two seasons of Rex Ryan's regime, 2009 and 2010, and, of course, is stuck in the same division with the Patriots.

Johnson, who took over overseeing the Jets when his brother, Woody, was hired by the Trump administration to be ambassador to the Britain in 2017, believes the plan his team has developed will lead to success. He's not saying the Jets will be a title contender right away, but he's definitely looking at major improvements for the upcoming season.

"I would never make that mandate," Johnson said of demanding a playoff team in 2019. "But I do expect us to be better; we are a better team. And we haven't even gotten to the draft."

The Jets made some big moves in free agency, topped by signing running back Le'Veon Bell. They also added a prime slot receiver in Jamison Crowder, and a tackling machine in linebacker C.J. Mosley.

"These are kind of like a wish list," Johnson explained. "As a matter of fact, it is a wish list because we put together the list prior to free agency and we got a number of the people we were hoping for. I think this team is better right now than it was a month ago."

New York was at the bottom of an AFC East that other than New England is mediocre. The Jets allowed 441 points, and were sporadic on offense.

But they have their franchise quarterback in Sam Darnold, the No. 3 overall draft selection last April. In Bell, they have perhaps the best all-around back in the league, though Todd Gurley and Saquon Barkley could argue that. Robby Anderson and Quincy Enunwa can be effective receivers, though neither is a No. 1 wideout. Tight end Chris Herndon showed lots of promise as a rookie.

Plus, the Jets have the third overall pick again next month, though it almost certainly will be used on a defensive player.

"I think the fans are going to love this team," Johnson said. "I know they love Bell and Mosley and KO (guard Kalechi Osemele). We've given Sam more targets and better protection. They can see our plan unfold and I think they will be happy with that."

Gase brings a new dynamic as head coach , the first offense-oriented guy in the job since Rich Kotite in 1995-96. He's been considered something of a QB guru, though his magic didn't work in Miami, where Gase was fired and never truly made the oft-injured Ryan Tannehill better.

Johnson, however, is highly encouraged by the working relationship he's seen between Gase and new defensive coordinator Gregg Williams , and between Gase and general manager Mike Maccagnan.

When he heard that Bell endorsed Gase and said they were operating on the same page, Johnson was "not surprised at all that he would feel it was a good relationship."

Williams did quite a job as interim coach in Cleveland last season, helping engineer a turnaround after Hue Jackson was fired that saw the Browns wind up 7-8-1. He comes to the Jets off that performance, and Johnson totally dismissed Williams' spotted history in New Orleans, when he oversaw a bounties program for hits by defenders.

"That's not really a concern for me," Johnson said of Williams' role in the Saints scandal that ended in 2012 with his suspension by the NFL. "He has an incredible defensive mind. I am overjoyed at the idea of his coming to our team."

He even looks forward to Gase's offense against Williams' defense in practices.

"I haven't seen anything adversarial," Johnson said of the Gase-Williams relationship. "We'll see when we get to practice. It could be spicy."

There will be plenty of new faces on the field this season, but the Jets are also making another big change — with new uniforms the team will unveil in a few weeks.

"It's about time for us to have a new look," Johnson sad. "Those things are pretty badass, I think."