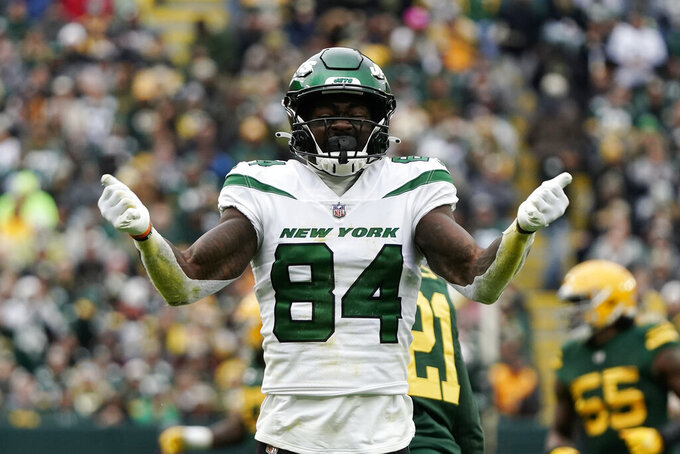 New York Jets wide receiver Corey Davis will miss his second straight game with a knee injury, leaving quarterback Zach Wilson without one of his most reliable playmakers against the Buffalo Bills.

Davis was hurt two weeks ago early in New York's 16-9 win at Denver, and he sat out last Sunday in the 22-17 loss at home to New England.

The nature of Davis' injury isn't clear, but coach Robert Saleh indicated Friday the wide receiver will return for the Jets' next game on Nov. 20 at New England.

“We’re just going to leave it at a knee,” Saleh said, “but we feel very confident that he’ll be back after the bye week.”

Davis is tied for fourth on the Jets with 19 receptions for 351 yards and two touchdowns. His absence last week created an opportunity for Denzel Mims, who was inactive for the first seven games.

The third-year receiver, a second-round pick who requested a trade during training camp because of a diminished role, had three receptions for 80 yards against the Patriots — including a 63-yard catch — in his season debut.

“His attitude has been awesome,” Saleh said of Mims. "I feel like three weeks ago, something flipped. From his daily approach to coachability, all of it has really amplified for him. He’s really taking the bull by the horns and really showing a lot of maturity, not that he wasn’t mature before.

While Mims was mostly the odd-man out when Davis was healthy, Saleh indicated Mims “absolutely” could continue to have a role when Davis returns.

“The sad part of injuries is that you’re not playing,” Saleh said. “The good part is that it gives somebody a chance to step up. All you can ask for is to have the door open — just a crack. Then, it’s the individual's job to blow it open. He did a nice job last week, and he has another opportunity to do it this week.”

NOTES: WR Elijah Moore, who remains with the Jets after recently requesting a trade, said he's staying positive. The second-rounder in last year's draft has been disappointed with his lack of playmaking opportunities. “I feel good, man,” said Moore, who has 16 catches this season. “I had a good day at practice. We've got a good week coming up, we've got a good team coming up, we've got the Bills and I'm ready to play.” ... Rookie DE Jermaine Johnson will play Sunday after missing the last three games with an ankle injury. “I think he’s going to have a really cool second half of the season,” Saleh said of the first-rounder. “I think he’ll play well this week. He’s got great length, strength, power, he’s got deceptive pass rush ability and the more reps he gets, I think he’s going to be a really good football player.” ... Saleh said TE C.J. Uzomah (shoulder), LT Duane Brown (shoulder) and S Lamarcus Joyner (hip) would be full participants at practice after being limited the previous two days and will play.