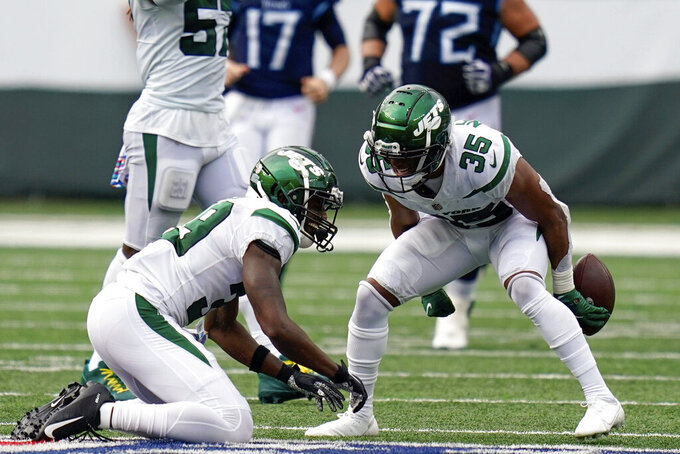 FILE - New York Jets' Sharrod Neasman, right, reacts during an NFL football game against the Tennessee Titans, on, Oct. 3, 2021, in East Rutherford, N.J. The 30-year-old Neasman has had an NFL journey filled with twists, turns and detours that might have derailed many. (AP Photo/Seth Wenig, File)

NEW YORK (AP) — Sharrod Neasman refused to give in to the doubts that crept into his head, the flashes of negativity that tried to threaten the dreams and goals he knew he would achieve.

Not when he was told he wasn't good enough to play Division I football. Not when he was working two jobs between high school and college, waiting to play again. Not when a knee injury and a coaching change blurred his football future.

“From the jump, I've always had my back up against the ropes,” the New York Jets safety told The Associated Press in a telephone interview. “It's always been like, ‘OK, this is going to be a fight.’”

The 30-year-old Neasman has had an NFL journey filled with twists, turns and detours that might have derailed many. The fact he's in his sixth pro season — against all odds — is a study in resilience and perseverance.

“I’m not going to lie, there were points where there were some dark times,” Neasman said. "I was like, 'Man, am I going to be able to do this? Because growing up in my city, I saw a lot of people chase football for a long time and ultimately they wasted their time, you know what I’m saying?

Neasman grew up in south Florida, one of five kids raised by his mother Latanya in a single-parent home. He became a star football player at Braden River High School in Bradenton, Florida, as a wide receiver who also returned kickoffs and punts. But his team was only lightly recruited by Division I schools and Neasman received no scholarship offers.

So he took the grainy, blurry video of his football highlights from YouTube and edited them using the skills he learned in one of his TV production classes. He scoured the internet to find email addresses of as many Division I head coaches and assistants as he could, and flooded their inboxes.

And then Neasman waited.

Knowing he would have some major bills to pay when he got to college, he started working at FedEx, loading trucks from 3 a.m. to 8 a.m. He'd then head to the mall, where he worked as a part-time sales associate at PacSun. Neasman even fit in some courses at a community college.

That went on for about a year and half.

In June 2011, the NFL lockout had players scrambling to find ways to stay in shape. At the nearby IMG Academy, players such as Cam Newton, Randall Cobb and Chris Weinke were working out and needed more receivers to throw to. Neasman's brother Marquel, who played quarterback at Central Florida and Grand Valley State, told him to come by.

“I was there working out and training with them and that sparked a confidence in me," Neasman said. “I was like, ‘You know what? This is very attainable, very achievable.’"

And then — finally — Florida Atlantic called.

They had no scholarships or preferred walk-on spots, but Neasman could try out for the football team once he got accepted into the school.

He got in and then was one of five tryout players out of about 100 to make it onto the team. Neasman was quickly switched from wide receiver to cornerback, and made a smooth transition.

“I just wanted to play ball,” he said.

But after his sophomore season, he tore the ACL in one of his knees and coach Carl Pelini was fired. Charlie Partridge took over as coach and Neasman's spot on the team wasn't secure.

Neasman met with Partridge and told him he was had earned a scholarship entering his junior year. Partridge wanted to honor that, but told Neasman he needed to get back on the field first.

He had surgery to repair his ACL in December 2012. Neasman was somehow back on the field five months later — and got his scholarship.

He played cornerback, nickelback and safety as a junior, and then became a full-time safety as a senior. He garnered attention from NFL teams and although he went undrafted, Atlanta signed him as a free agent.

As a rookie, he played in the Super Bowl.

He had two stints with the Falcons over a five-year span, with a training camp stop in New Orleans in between. Neasman signed with the Jets in June and has played mostly as a backup in 11 games, including one start, with his first career interception.

He's likely out this week against Tampa Bay as he recovers from a bout with COVID-19. Neasman is feeling better and thankful for his journey.

“I’m extremely blessed,” Neasman said. “By the grace of God, I was put in an extremely fortunate position to play the sport that I love. I’m extremely grateful.”

Through the Academy of Kings in Orlando, a preparatory school founded by his brother Marquel to help develop male leaders, Neasman has dedicated himself to inspiring youngsters.

He donated almost $60,000 to the cause, which was matched by the Jets as part of the NFL's “Inspire Change” initiative. Neasman shares his story to show others they, too, can achieve their dreams.

“I had some low points where I where I doubted myself and I never really shared, like, ‘Yeah, I’ll go to the NFL and I’ll have a great career,'” Neasman said. "I knew that from high school, but didn’t always voice that opinion to people because I didn’t want to hear my dream shot down. And it didn’t really matter because I believed what I believed. ... I just feel like getting that message out to people, young kids, and from the situation that I’m in, it’ll just make them not quit.

“It’ll make them work that much harder and be like, ‘Well, look at him.’ Because it happened to me, right?”