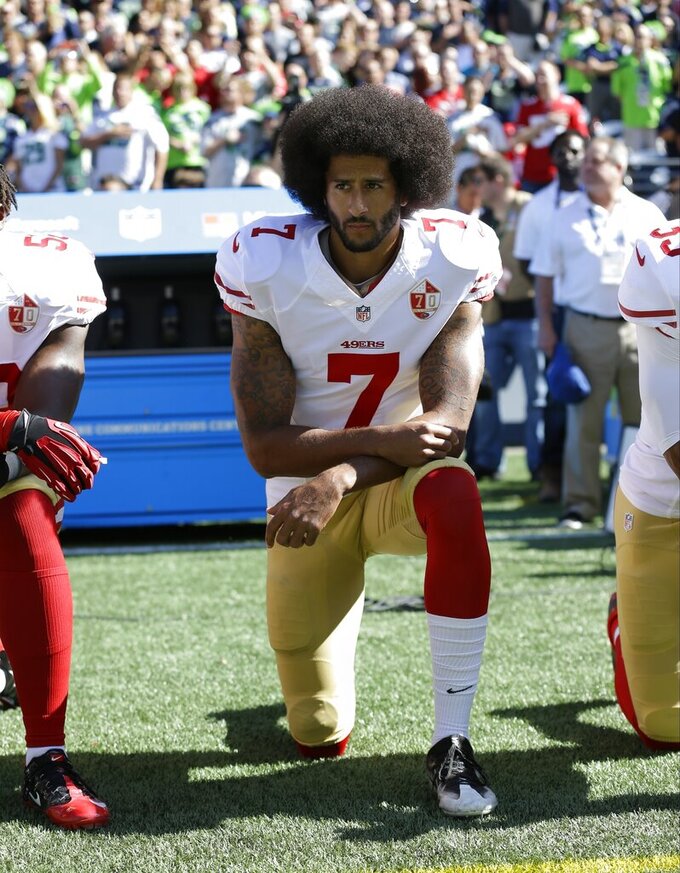 FILE - In this Sept. 25, 2016, file photo, San Francisco 49ers' Colin Kaepernick kneels during the national anthem before an NFL football game against the Seattle Seahawks in Seattle. The same guys who banished Kaepernick from the league for kneeling during the anthem to raise awareness about those very same issues have ruthlessly commandeered his cause. (AP Photo/Ted S. Warren, File)

Seven years ago at the Super Bowl, history was made when a 49ers receiver, unable to break free from the prying hands of a harassing cornerback, could not grab a pass on fourth-and-goal that would have given San Francisco the go-ahead score late in the game against the Baltimore Ravens.

The Niners lost that game 34-31 and were relegated to the forgettable list of very good NFL teams who came in second place. For the man who threw that pass, Colin Kaepernick, things have never been the same.

The same could be said about the NFL.

The 49ers made it back to the Super Bowl this year, but Kaepernick had nothing to do with this trip. His name has barely been mentioned. In most instances, this would simply be another example of the relentless churn of players through a league that chews them up and spits them out. But at 32, Kaepernick could, conceivably, be in his prime. Instead, he has been out of the league for three years.

And yet, if there’s a single player who brought this league to a point of reckoning — who exposed it for what it is, what it is not, and what it could still be when it comes to shaping conversations about the American experience that cascade well beyond the football field — it is that now-unemployed quarterback out of Nevada who came 5 yards from winning the Super Bowl in 2013.

“By losing that job, he gained a legacy, a career," said Marcus Hunter, chair of the department of African-American Studies at UCLA. “Now, he has more than a job. He’s an activist-minded thought leader about the state of race in America. A lot of young people, including a lot who I teach, often find themselves sitting there waiting to see what he is going to say.”

Instead of being forever known as a Super Bowl champion, Kaepernick will go down as the quarterback who kneeled — first during the national anthem before a preseason game — to spark one of the biggest controversies in the NFL’s 100-year history and, in turn, to bring what looks like a premature end to his own career.

He explained his low-key decision not to stand in 2016 as a way of underscoring his disdain for social injustice in America, a country where blacks are targeted and arrested by police at alarmingly higher rates than are whites.

The decision drew the support of fellow players, dozens of whom initially joined him in his show of protest.

It drew the ire of a certain cross-section of the country, stoked in part by President Donald Trump, who infamously wondered out loud at a political rally about how nice it would be for an NFL owner to point at a kneeling player and say “Get that son of a bitch off the field right now.” Not long after, Vice President Mike Pence walked out of a game involving the 49ers, several of whom supported Kaepernick's cause and kneeled during the anthem before a game against the Indianapolis Colts.

It forced the NFL into a series of uncomfortable decisions, first in an attempt to simply tamp down the discord about kneeling, then later to try to get on board with Kaepernick’s cause, albeit with an unspoken hope that the protests come to a halt.

“He clearly drew attention to a societal problem which needs to be addressed and that we haven’t addressed,” said Alan Page, the Hall of Fame defensive lineman who went on to a career as a Minnesota Supreme Court justice. “There’s value in that. The problem is, we get sidetracked, I think, in focusing on things that aren’t really relevant to the problem. We get sidetracked on flags and all that.”

Though it’s hard to imagine that not one of 32 teams could find a place for a quarterback with potential to disrupt defenses with both his arm and his legs, a quarterback who, to this day, has the sixth-best TD-to-interception ratio in NFL history, a quarterback not far removed from bringing a team within five yards of winning the Super Bowl, there is no spot for Kaepernick.

He filed a grievance against the league, claiming the teams colluded to keep him out, and the parties eventually reached an undisclosed settlement.

In one of the more bizarre 24-hour news cycles of the past season, the NFL arranged a workout for Kaepernick in Atlanta that all teams were welcome to attend. But unhappy with caveats and rules the league placed on the workout, Kaepernick abruptly pulled out of the NFL-sanctioned event and arranged a different workout in another location. Only a handful of teams sent scouts, and the day ended with everyone’s intentions in question.

Did the NFL really want to help Kaepernick?

But it went nowhere.

Before that, the NFL, well aware of the need to address Kaepernick’s off-the-field concerns, began pumping money into his social-justice cause, to the tune of $25 million so far with more than $60 million additional promised. It teamed with an activist-minded group composed of a few dozen players who called themselves The Players Coalition. That group, however, did not include Kaepernick, who went his own way after a series of contentious meetings with the leaders who ended up as the backbone of the Coalition.

The NFL named the program “Inspire Change.” The league has been running a commercial through the playoffs, with another airing scheduled for the Super Bowl, in which former wide receiver Anquan Boldin, a founder of The Players Coalition, tells the story of his cousin getting shot and killed by a plainclothes police officer in Florida.

The irony isn’t lost that the NFL is getting credit for advancing a cause spurred by a player who cannot get a job in its own league.

“Doing the right thing for whatever reason is always a plus,” Page said of the NFL. “I've gotten beyond trying to ascribe people’s motives. What’s important is they do the right thing.”

What there is no definitive answer to, though, is exactly what the “right thing” really is.

As the 49ers prepared for their first trip to the Super Bowl since the Kaepernick game, it was hard not to wonder how both football and the quarterback might be different were it not for those five yards that were not gained and the touchdown that was not scored that day in the Superdome.

As it turned out, Kaepernick followed up with a productive season that stopped one game short of the Super Bowl. He followed that by signing a six-year, $126 million contract that he would never come close to playing out. He struggled through 2014, then dealt with injuries and an unsuccessful transition to a new coaching staff, led by Jim Tomsula, who went 5-11 in 2015 and was promptly fired.

In 2016, Kaepernick was working with another new coach, Chip Kelly, but the quarterback was coming off injuries, had asked for a trade and, eventually, had his contract reworked to much less lucrative terms.

Kelly also was ousted after a year, and when the current coach, Kyle Shanahan, came on, he made it clear that the more traditional offense he was going to run would not be a good fit for an option-read style quarterback the likes of Kaepernick. One twist in all this was that one of the few owners who supported the quarterback publicly was Jed York of the Niners. But a team that was friendly to Kaepernick's cause suddenly had no use for him.

How would things be different if he had been a Super Bowl champion?

“Maybe he wouldn’t have been as easily dismissed,” Hunter offers.

Dismissed how, though? As an athlete? As a voice for even bigger issues?

“When you win the Super Bowl as a quarterback in the NFL, it gives you a certain level of power,” Hunter says. “But the other side of that is, if he’d won, maybe it takes him in a whole different direction.”

At the NFL Players’ Association’s annual news conference earlier this week, the subject of Kaepernick came up, ever so briefly.

The union has defended Kaepernick, fought for him in the collusion case and, in theory, is behind what he’s all about. The union also represents players involved in the Players Coalition, which is fighting for many of the same things but is not on the same page with the quarterback.

NFLPA executive director DeMaurice Smith danced around the question of what he thought about Kaepernick specifically, choosing instead to generically laud “anybody who makes a decision to represent issues that are greater than themselves.”

After that flourish, the microphone moved to the next reporter. But before the question came, Michael Thomas, a player’s rep from the New York Giants who sided with Kaepernick in the contentious debate over The Players Coalition, stopped the momentum.

“As a player who did take a knee with him, he had a huge impact on a lot of players, that whole movement did,” Thomas interjected. “It means a lot, taking a stand for something that’s greater than us, knowing you’re going to get punished. We've seen how he’s been punished, and the impact was huge. And a lot of players still talk about it.”

And with that, Thomas may have best summed up the place to which both Kaepernick and the NFL have been brought to today — still unsettled, still uncomfortable, but all of it still bubbling, even if it’s a little bit farther beneath the surface.