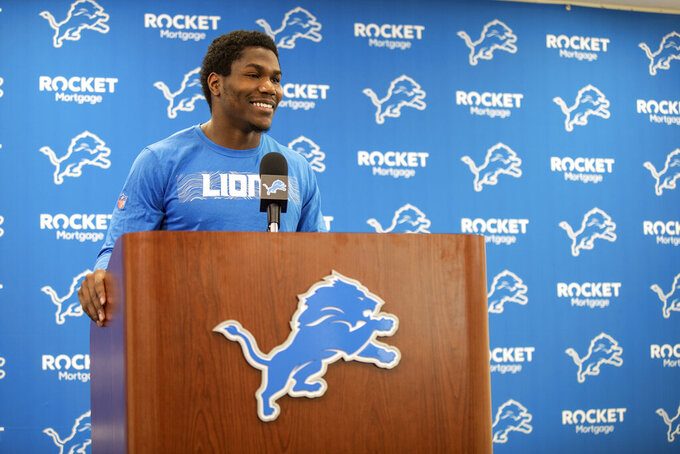 Detroit Lions running back Kerryon Johnson at a press conference on Thursday, May 2, 2019 in Allen Park, Mich. (Detroit Lions via AP)

ALLEN PARK, Mich. (AP) — Kerryon Johnson's rookie season was one of few bright spots for the Detroit Lions in 2018.

And even that ended sooner than the young running back would have liked.

Johnson was limited to 10 games last season, and after the Lions were eliminated from playoff contention in mid-December, he went on injured reserve with knee problems. In the time he did play, he ran for 641 yards, the most by a Detroit player since 2014.

The 21-year-old Johnson says he learned a lot from his first year as a pro. He figures to be a big part of any improvement Detroit enjoys this coming season.

Johnson was available to reporters for a few minutes Thursday, and he approached the session with confidence, unafraid to show his personality. The former Auburn star began his news conference with a message for at least some of the Lions' fan base.

Both Auburn and Michigan State made the Final Four this year in basketball, losing in the semifinals. Johnson said — unprompted — that if the teams had met in the title game, his Tigers would have won by 20.

Later, he discussed "Game of Thrones" — although he also dodged a question about whether he'd like the Lions to appear on HBO's "Hard Knocks" series. Whether that behind-the-scenes show features Detroit or not, Johnson has a chance to become one of the Lions' most popular and productive players.

He says he's healthy, and he also indicated that this offseason has been a little more conducive to working on his craft.

"Last year, I didn't get this time. Last year, we're preparing for the combine, all that fun stuff that people like to see," Johnson said. "You don't really get a chance to get better in football ... really work on your specific skills."

Johnson was asked about the so-called rookie wall, and he had an amusing answer to that too.

"Rookie wall hit me, like, fall camp," he said.

Still, he finished second on the team with 118 carries despite missing so much time at the end of the season. Only LeGarrette Blount had more, and he's a free agent who is no longer with the Lions. The stage is set for Johnson to take on an even more significant role.

"I try to prepare every game like I'm getting 30 carries. My last year at Auburn did teach me that," he said. "That's not realistic, but that's the kind of mindset I go in with."

NOTES: The Lions announced the signing of DT Darius Kilgo, released RB Kerwynn Williams and waived T Jarron Jones. Kilgo had five tackles in 11 games last season for the Tennessee Titans. He was originally selected in the sixth round of the 2015 draft by Denver. He has spent time with the Broncos and Patriots, and also on the practice squads of the Jaguars and Texans. ... Lions head athletic trainer Kevin Bastin plans to step away from the NFL later this month. He is being replaced by Dave Granito.