Losing streak behind them, Pats look to build on progress 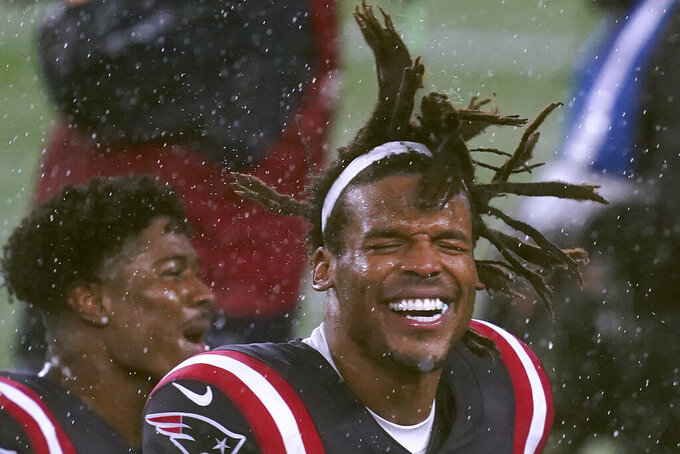 FOXBOROUGH, Mass. (AP) — So many of Cam Newton’s postgame news conferences this season have focused on what hasn’t been right with the Patriots’ offense.

Victories in each of the past two weeks have given him an opportunity to focus on his team’s improvements. But that doesn’t mean he’s ready to declare they have figured everything out.

“Not going to necessarily say it’s a turning point,” Newton said of New England’s 23-17 win over the Ravens on Sunday. “As this season keeps going, we just want to keep transcending upwardly in a way that our team is getting better week by week.”

At 4-5 the Patriots aren’t quite out of the early season hole they dug for themselves. But they have made a lot of progress since a four-game losing streak threatened to derail any hope of turning things around.

Though Sunday’s win was certainly aided by rainy and windy conditions that helped slow down reigning MVP Lamar Jackson, New England still showcased many of the things it hoped would be staples of its offense.

Newton was productive running and throwing, and running back Damien Harris kept the chains moving, posting his third, 100-yard game of the season. The result was an offense that didn’t have a turnover for the second straight game after giving it away 15 times over its first seven games.

It all helped to stabilize a unit that’s been ravaged by injuries throughout 2020.

And after back-to-back wins for the first time this season, the Patriots are suddenly inching their way back in the playoffs hunt.

“We have a lot of young players that have big roles for us and especially myself, learning new things in this offense and getting comfortable,” Newton said. “All in all, we just got to keep the ball moving forward and staying focused throughout it all.”

“We wanted to stand up and show how tough and physical we were,” he said. “That was kind of the mentality of the whole team.”

While Newton is slowly gaining his confidence throwing the ball in the Patriots’ system, the rushing attack continues to prop up the offense. The Patriots rushed for 173 yards against Baltimore, marking the fifth time this season that they have rushed for at least 170s. They had 217 yards vs. Miami (Week 1), 250 vs. Las Vegas (Week 3), 185 at Kansas City (Week 4) and 188 yards at Buffalo (Week 8).

New England has rushed for 14 touchdowns in 2020, tied with the Los Angeles Rams for second and behind only San Francisco and Arizona, which both have 15 rushing scores.

A week after producing points in the first quarter for just the second time this season, the Patriots had yet another slow offensive start on Sunday. Their first possession of the game showed promise with three first downs, including a fourth-down conversion. But Newton was sacked three plays later, forcing them to punt. It wound up being the Patriots’ only possession of the quarter.

Cornerback J.C. Jackson. With his interception against the Ravens, he now has a pick in five straight games. He is the only NFL player with a streak that long in the past five seasons, and the only Patriot to do it in franchise history.

Linebacker Terez Hall. The undrafted rookie was elevated to the active roster from the practice squad for the second straight week. He had eight tackles, but was penalized for lowering his head to initiate contact for his hit on fullback Patrick Ricard. The penalty moved the ball inside the Patriots 10 and helped set up a 24-yard Justin Tucker field goal.

For the first time in weeks the Patriots came out of the game without a significant injury. That is huge considering they still have several key players on the mend, including cornerback Stephon Gilmore (knee) and linebacker Ja’Whaun Bentley (groin).

New England will try to guard against a letdown when it heads to Houston (2-7) Sunday to face a Texans team that has lost three of its last four.