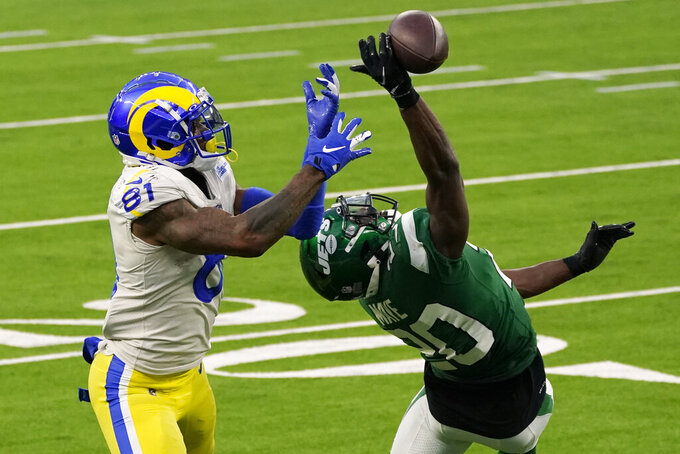 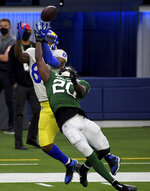 NEW YORK (AP) — The football was zipping through the air as the New York Jets players and coaches held their breath on the sideline.

All except for Adam Gase. He was watching Marcus Maye run stride for stride with Rams tight end Gerald Everett with the team's first victory of the season on the line.

“When I saw that ball go up and I saw who it was,” the Jets coach recalled Thursday, “I was like, ‘We have as good a chance as we’ve ever had because that guy is on him.’”

Maye turned to the ball, leaped with his back to Everett and swatted away Jared Goff's long throw on fourth-and-4 with 3:54 left — helping seal the Jets' surprising 23-20 win at Los Angeles last Sunday.

“I just made a play on fourth down,” a humble Maye said after the game, "but it was definitely a group effort, a team effort.”

The fourth-year safety has been making big plays all season, even while the Jets were off to an 0-13 start. Through it all, Maye has been one of the constant bright spots — and it was capped by him being selected the team's Curtis Martin MVP for the season, as voted on by the players.

“It could've been anybody, but for them to choose me is definitely an honor," Maye said Thursday. "There have been a lot of ups and downs this year, but we all stuck together.”

Maye was elected a team captain and has embraced the role of team leader this season, something that has become even more apparent since the trade of safety Jamal Adams to Seattle in the offseason. While Adams was very much a vocal presence on the field and in the locker room, Maye has been mostly a leader by example.

And that has earned him the respect of his teammates and coaches.

“He’s checked every box you can possibly check to win that award for us, for sure,” Gase said. “Whether you’re a player or coach — anybody in the organization — his leadership has been phenomenal since we got this thing going.”

Maye made some headlines a few weeks ago when he was uncharacteristically critical of the play-calling by then-defensive coordinator Gregg Williams, who dialed up an all-out blitz against Las Vegas with the Jets holding a late lead. The Raiders ended up scoring a touchdown on undrafted rookie cornerback Lamar Jackson. And Williams was fired the next day.

Many of Maye's teammates applauded him for speaking his mind after such a brutal loss.

Gase also pointed to Maye's ability to excel while moving back and forth between the free safety and strong safety spots because of several injuries to teammates.

Maye's durability, flexibility and overall understanding of the defensive scheme have set him apart.

“Guys have noticed the work that he has put in and the consistency in terms of his attitude that he's had all year," quarterback Sam Darnold said. “That's the biggest thing with him is there's never a bad day. And, if he does have a bad day, he's not going to let anyone know about it. His attitude won't show it.”

Maye was a second-round pick of the Jets in 2017, a round after New York took Adams. The two formed one of the league's best safety combinations through their first three NFL seasons. Maye was often overshadowed by Adams, but has made even casual observers take notice this season. He had two sacks in the season opener at Buffalo, made a behind-the-back interception at Miami and had a one-handed tip pick against Seattle.

And that was before that athletic play against Los Angeles.

Maye’s rookie contract will expire at the end of the season, and general manager Joe Douglas and the Jets will have to make a big decision in the offseason. They could choose to pick up the fifth-year option on Maye’s deal, or sign him to an extension to ensure he doesn’t hit free agency — and potentially leave to sign elsewhere.

“Any time that you have players that you like, not only as guys in locker room, but talent-wise as well, you want to keep them in the organization,” Gase said.

Maye said there haven’t been any contract talks yet, but he would like to remain in New York. He’s focused on the final two games, first. And, perhaps making a few more MVP-like plays to help the Jets to another victory.

“I'm a huge fan,” interim defensive coordinator Frank Bush said. “This guy's just gotten better and better and better. ... If you add more parts around him where he can be freed up to do some things, he could be even better."