Mayfield makes too many mistakes in return from COVID list 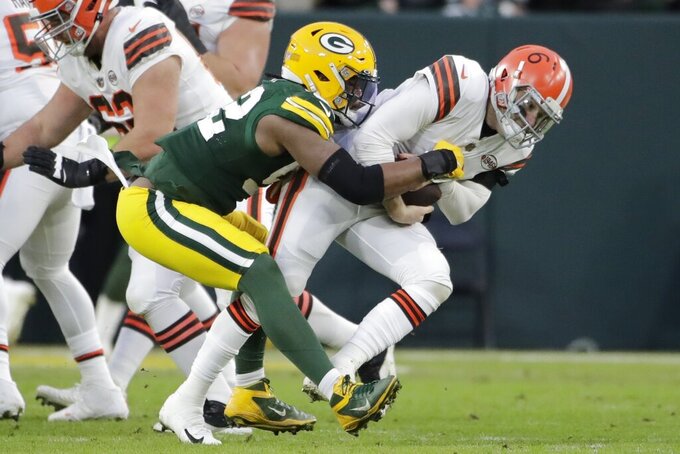 GREEN BAY, Wis. (AP) — Baker Mayfield showed how difficult it is to thrive without getting much practice time, no matter how easy Aaron Rodgers has made it look over the last month.

Mayfield threw a career-high four interceptions in his first game since returning from the reserve/COVID-19 list as the Browns’ fading playoff hopes took another hit with a 24-22 loss to the Green Bay Packers on Saturday.

“It was just missed throws,” Mayfield said. “Uncharacteristic, and I hurt this team. That’s the most frustrating thing for me, because I thought our defense played tremendous against a really, really good offense. But when you turn the ball over on your own territory, in the red zone and around midfield and give them extra opportunities, they’re going to take advantage of it. That’s just who they are.”

Mayfield missed a 16-14 loss to the Las Vegas Raiders on Monday because of his presence on the list. The Browns (7-8) were missing at least eight regulars Saturday and about a dozen regulars on Monday.

With left tackle Jedrick Wills and center JC Tretter both on the coronavirus list, Mayfield was sacked five times while going 21 of 36 for 222 yards. He threw touchdown passes to Harrison Bryant and Anthony Schwartz.

Even with so many players sidelined, the Browns still could have won this game and handed the Packers their first home loss of the season — if Mayfield hadn’t made so many mistakes.

“With Baker, I know he had four interceptions, but listen, we win as a team, we lose as a team,” Browns coach Kevin Stefanski said. “He’s going to take it hard and we’re all taking it hard.”

Stefanski said he didn’t consider making a quarterback switch at halftime. Three of Mayfield’s interceptions came in the first half.

Mayfield has been unable to practice the last couple of weeks due to the NFL’s COVID-19 protocols. But he only had to look at the opposite sideline to know that a lack of practice time doesn’t always result in a lack of production.

Rodgers has thrown 16 touchdown passes without an interception over his last five games for the Packers (12-3) despite dealing with a toe injury that has curtailed his practice participation. Rodgers says he fractured his left pinky toe while working out at home during his own quarantine after a positive COVID-19 test.

Mayfield didn’t come close to matching that kind of efficiency.

“I expect myself to make (those throws), and that’s why it’s frustrating,” Mayfield said. “I’d be sitting up here giving an excuse that I hadn’t practiced, but I’m a quarterback in the NFL, I need to make those throws and I have before and time and time again.”

Each of the Packers’ three touchdowns followed Mayfield interceptions. His final mistake was perhaps the costliest. The Browns trailed 24-22 and faced third-and-10 from midfield when Rasul Douglas picked off a pass intended for Donovan Peoples-Jones with 43 seconds left.

Mayfield said he believed Douglas made a bit of contact on the game-clinching play, but added that “you can’t bank on that being called.”

“I have to look at the tape,” Stefanski said. “I did think there was some tugging and holding on Donovan Peoples-Jones. I understand the officials are not going to get every call, but in big moments like that, that’s tough.”

That was Douglas’ second interception of the day. Mayfield also threw passes that were picked off by Darnell Savage and Chandon Sullivan.

Mayfield’s turnovers spoiled solid performances by Cleveland’s running game and defense. Nick Chubb rushed for 126 yards and a touchdown on 17 carries, and he also had three catches for 58 yards. Cleveland’s defense allowed just three points in the second half and gave up just 36 yards over the Packers’ last four possessions.

That combination could have added up to a Browns victory if Mayfield was spotless. He didn’t come close to that.