Media night more like a mosh pit and Mardi Gras 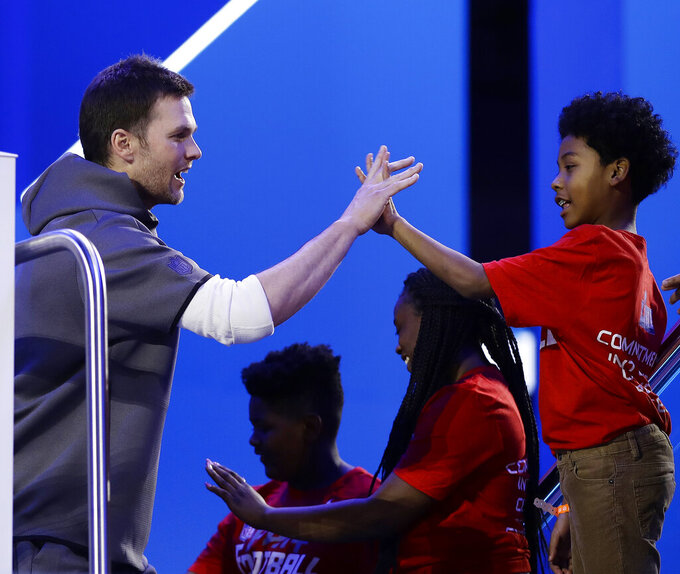 ATLANTA (AP) — Super Bowl Media Night is the NFL's version of a rock concert, with player interviews rather than music.

It's a Mardi Gras party, complete with the costumes.

It's a slow-motion stampede conducted mostly by quasi-media members or outright impostors.

Some Los Angeles Rams players and coach Sean McVay sat at podiums Monday night, answering questions ranging from serious to outrageous. Other Rams were spread across the mosh pit of a floor at the State Farm Arena, dealing with the microphones and TV cameras and the noise bouncing through the building.

This is the start of the biggest week in American football?

He was, of course, sitting in the safety of a podium.

As he looked out, he might spot a woman in a blue gown strutting for TV cameras that didn't seem to be searching for anything football related.

Or several people in full Mexican regalia — nice sombreros, for sure — giving their own interviews rather than asking anything about jet sweeps or corner blitzes.

There even was a man dressed in a clown suit from head to toe, wearing the makeup to complement the outfit. How fitting.

"You play all your career to get here," Donald added. Presumably he meant to face the AFC champion Patriots on Sunday in the game, not the opening night that increasingly seems to be about anything but his profession. "It's a blessing to be here."

Melissa Whitworth, the wife of Donald's teammate, tackle Andrew Whitworth, didn't mind the mayhem at all. On hand with her four children — twins Sarah and Drew, both 7; Michael, who is 6; and Katherine, 4 — she has been a fan of Media Night for a while, and was thrilled her husband had gotten there at least.

"After 13 years," she said with a wide smile, her kids nearby dressed in Rams jerseys with the number 77 and Whitworth on the back. "I love this night. I love everything about this night."

So did daughter Sarah, who said she didn't like football — she might have had quite a bit of company among the throngs paying more attention to each other than to the players. Asked if she watched her dad play, she shook her head 'no', noting she preferred ballet.

That certainly beat the scrum going on around the Whitworths. And everywhere else on the floor.

Many Rams were able to break away from the throngs of onlookers and pretend media on the floor to return to their childhoods. Marcus Peters and Dante Fowler Jr., walked onto a makeshift stage Monday night and played a tossing game for the Nickelodeon show "Double Dare."

As for the Patriots, well, the lineup was short.

"We're having them do physical challenges," said Marc Summers, the long-time host of the program. "But we're not getting the Patriots to come over. New England has been here many times and they are confident and are a little over this (scene). The Rams are having the time of their lives and enjoying participating in everything."

A few minutes later, Patriots placekicker Stephen Gostkowski might have invited the wrath of his coach by actually taking part in one of Summers' activities, a mini-basketball challenge. Talk about being unafraid of a double dare.

Back to the chaos elsewhere, one front-row fan sported a Patriots jersey while wearing a Rams head mask. An ugly one, too.