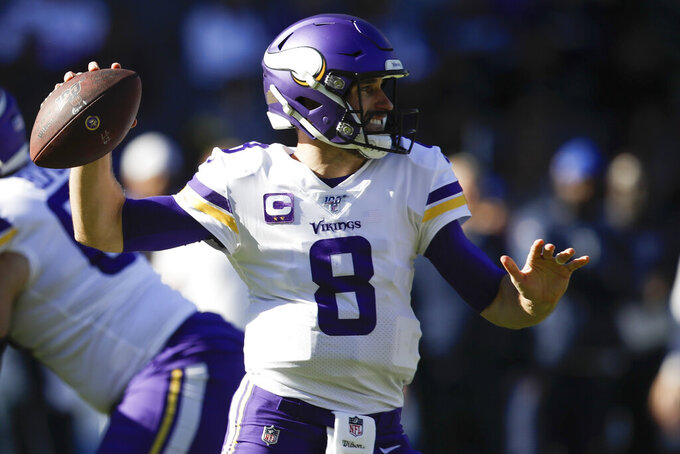 CARSON, Calif, (AP) — Mike Zimmer has accomplished many things as a defensive coordinator and head coach. He added one more Sunday in the Minnesota Vikings' 39-10 rout of the Los Angeles Chargers.

The Vikings forced seven Chargers' turnovers and converted them into 20 points. It is the most takeaways for a Zimmer-led unit, surpassing the six that Dallas forced against Washington in 2003.

“Obviously, the turnovers were big," Zimmer said. “We knew that they had minus in turnover margin, so it was important that we try to get some today."

The Vikings have won four of their last five going into next Monday night's key NFC North showdown against Green Bay. Minnesota also has a two-game lead for the NFC's final playoff spot after Dallas defeated the Los Angeles Rams.

“It's still all up for grabs," said Kirk Cousins, who was 19 of 25 for 207 yards with a touchdown and interception. “Ten wins is a good place to be. We've put ourselves in a position to have a lot to play for these last two games."

The biggest turnover came just before halftime. The Vikings led 12-10 but the Chargers mounted a late drive and were in field goal range at the 26 with 23 seconds remaining. But on second-and-2, Philip Rivers fumbled when he was sacked by Danielle Hunter. Austin Ekeler recovered it at the 38 and tried to make a play but also fumbled. Ifeadi Odenigbo then scooped up the loose ball and went 56 yards for a touchdown to give Minnesota a 19-10 lead.

“Danielle did a heck of a job forcing that fumble. I was fortunate to pick the ball up," Obenigbo said of the Vikings' second defensive touchdown in three games. “I was running down and getting tired but I was fortunate to score the touchdown. Coach Zim always harps on pursuit and effort. That was a collective effort from everyone.

“It was pretty neat doing it against the Chargers because I grew up a Chargers fan because of LaDainian Tomlinson and Philip Rivers. Now being able to play them and be able to score my first touchdown is very cool."

The score was part of a run of 30 straight Vikings points after the Chargers had a 10-9 lead midway through the second quarter.

Minnesota's other two phases were solid as well. Dan Bailey kicked four field goals and Mike Boone ran for 56 yards and a pair of touchdowns.

The Chargers (5-9), who have dropped four of their last five, had their worst performance of the season. Melvin Gordon fumbled twice and Philip Rivers threw three interceptions. Rivers, who threw for 307 yards, has been picked off 11 times in the past five games.

“We got our (butt) kicked in all three phases," Chargers coach Anthony Lynn said. “We've gotten beat but we've never gotten beat like that, and that was my problem today. That's my frustration right now. I haven't seen that in the three years since I've been here."

The Vikings scored on the opening drive for the fifth time this season when Cousins connected with Irv Smith Jr. in the back of the end zone for a 1-yard touchdown. Dan Bailey missed his fourth extra point when it went off the right upright.

The Chargers got on the board with Michael Badgley's 41-yard field goal but gave it back on their next drive. Harrison Smith recovered Gordon's fumble at the LA 11. The turnover would result in a field goal by Bailey on the first play of the second quarter.

“It's about keep plugging away. The offense kept coming away with points but for us to get the touchdown at the end of the half, it really gave us separation," Vikings cornerback Xavier Rhodes said.

Boone had most of his carries in the second half after Dalvin Cook was injured. He had touchdown runs of 8 and 2 yards in the fourth quarter to put the game out of reach.

Hunter was everywhere for the Vikings. The defensive end finished with five tackles but had a sack, two forced fumbles and fumble recovery.

Gordon was benched by Lynn after his second fumble, which came on the opening drive of the second half. Lynn referred to it as “giving him a break” but admitted that the fumbles did bother him.

It was Gordon's first fumbles since the one he had at the goal line at Tennessee on Oct. 20.

Vikings: Cook suffered a shoulder injury on the opening drive of the second half and did not return.

Chargers: LT Russell Okung re-injured his groin late in the second quarter and did not return.

Vikings: host Green Bay next Monday in a key NFC North showdown. The Packers have a one-game lead in the division.

Chargers: host Oakland next Sunday in their final game in Carson. The Chargers and Rams will move into their new stadium in Inglewood next season.