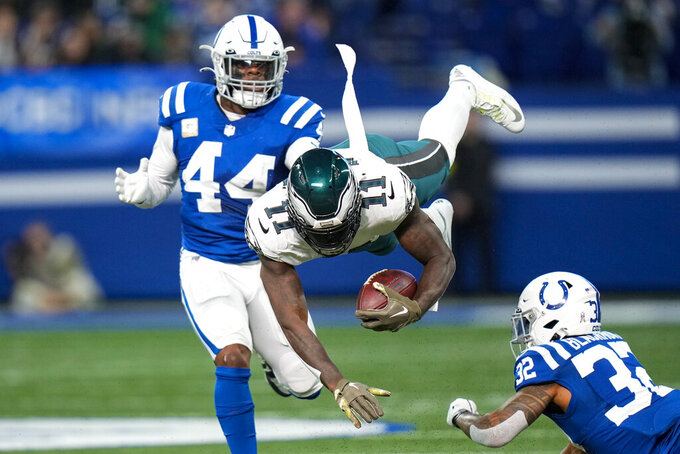 TURNOVER DIFFERENTIAL: Steelers even; Colts minus-8.

STEELERS PLAYER TO WATCH: OLB T.J. Watt. After missing seven games with a left pectoral injury, last season's NFL Defensive Player of the Year spent his first week back knocking off rust. He looked stronger Sunday against Cincinnati, coming up with six tackles and posting his second interception of the season. With Indy starting two young players on an offensive line that has struggled, the Steelers need Watt to play more like his old self and cause chaos in the Colts' backfield.

COLTS PLAYER TO WATCH: WR Michael Pittman Jr. If the Colts give QB Matt Ryan time, Pittman could have a huge day. Clearly, he's the Colts' top receiver and Ryan's favorite target and against a pass defense allowing a league-worst 272.1 yards passing per game, new play-caller Parks Frazier would be well-advised to rely on Pittman's size, physical play and ability to run after the catch early and often.

KEY MATCHUP: Steelers run defense vs. RB Jonathan Taylor. Last year’s league rushing champ has run for 231 yards and two scores in the past two games. With interim coach Jeff Saturday appearing to be more patient in staying with the ground game, Taylor again could carry a heavy load against a team that has long been committed to stopping the run. Not surprisingly, that's what the Steelers' defense still does best.

KEY INJURIES: Pittsburgh lost WR Miles Boykin (oblique) and backup RB Jaylen Warren (hamstring) in the first half last Sunday and C Mason Cole (foot) was replaced by J.C. Hassenauer at the start of the third quarter. Coach Mike Tomlin may not have any updates until the weekend. ... Indy will likely be missing DE Kwity Paye (ankle) for the second straight week and possibly OL Matt Pryor (illness). The Colts also will be awaiting a decision on TE Jelani Woods, who was inactive last week because of a shoulder injury.

SERIES NOTES: The Steelers have dominated this series since the 1970s and have won the past seven meetings. ... Pittsburgh has won all five playoff matchups, the past two on the way to Super Bowls following the 1995 and 2005 seasons. ... Both franchises agreed to move from the NFL to AFC as part of the 1970 merger. Cleveland was the other team to make the switch. ... Hall of Famer Johnny Unitas played high school football in Pittsburgh and was a 1955 ninth-round draft pick of the Steelers, who cut him before the season started. A year later, Unitas joined the Baltimore Colts where he spent the next 17 seasons of his Hall of Fame career. Indy owner Jim Irsay first met Unitas as a ball boy at training camp in 1972 after his late father, Robert, bought the Los Angeles Rams and swapped franchises with Carroll Rosenbloom to acquire the Colts.

STATS AND STUFF: Pittsburgh has lost two of its past three and seven of nine since a season-opening win over the Bengals. ... The Steelers' most recent loss in this series came in November 2008 and they are 3-0 all time at Lucas Oil Stadium. ... Pittsburgh's Mike Tomlin has had three eight-loss seasons during his 16-year stint as coach, but has never had a sub-.500 season. The Steelers need to win seven of their last eight to avoid the franchise's first losing season since 2003. ... Rookie QB Kenny Pickett has thrown eight interceptions in seven games, but has shown improvement of late. Pickett hasn't thrown a pick in either of his past two starts. ... Steelers LB Alex Highsmith is tied for fifth in the NFL with nine sacks. ... Pittsburgh DBs Levi Wallace and Minkah Fitzpatrick rank among the league leaders with three interceptions each. ... Pittsburgh's running game has shown signs of improvement recently. The Steelers have 319 yards rushing over their past two games, including 189 from Najee Harris. ... Pittsburgh's secondary has struggled against the pass. The Steelers have allowed the most yards passing and touchdown passes (22) in the NFL. Cincinnati's Joe Burrow picked them apart last week while throwing for four scores. ... Indy will be playing its second team from Pennsylvania in two weeks. ... The Colts have lost three of their past four overall and are 2-3 at home this season. ... Ryan, who attended high school near Philadelphia, needs 11 completions to become the fifth player in league history with 5,500. He also needs one game-winning drive to tie former Pitt star Dan Marino (47) for No. 5 all time. ... Taylor needs one TD run to tie Hall of Famer Eric Dickerson (32) for No. 8 in franchise history. ... Colts LB Zaire Franklin leads the NFL in tackles (109) in his first full season as a starter. ... Indy DE Yannick Ngakoue needs 1 1/2 sacks to extend the league's third-longest active streak of consecutive seasons with eight or more to seven.

FANTASY TIP: It's easy to forget how effective Taylor was in the Colts' passing game in 2021, too. He posted league highs with 1,811 yards and 18 TD runs, but he also had 40 receptions for 360 yards and two more scores. His versatility could pose a serious danger to a Steelers defense that allowed Bengals RB Samaje Perine to catch four passes for 52 yards and three scores.