New York Giants dealing with rash of injuries for centers 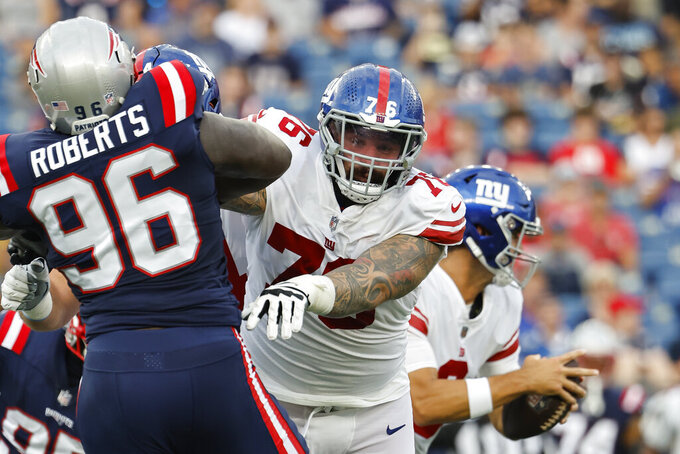 EAST RUTHERFORD, N.J. (AP) — The New York Giants have been hit hard by a run of injuries for the team's centers.

The injuries will force Max Garcia, who had been running with the first team at left guard, to move to center.

The Giants signed offensive lineman Chris Owens and brought back guard Josh Rivas, who was waived on Sunday. Owens is an undrafted rookie who played both tackle and center for Alabama last season.

Offensive line coach Bobby Johnson said Friday the only time he has experienced a injury run at center was when he was coaching at Indiana.

“It's probably just a fluke that it’s all the centers right now,” Johnson said. “But that’s why it’s always important to cross-train guys. That’s why I stress cross training, not only center-guard, but guard-tackle. If a guy can play all five, play all five, because you never know what’s going to happen.”

Garcia has been a guard in his first seven years in the NFL, but he has worked some at center.

Tackle Devery Hamilton, a first-year pro from Duke, also has taken snaps at center and will probably get time Sunday, along with Owens and whoever the staff decides to audition.

Daboll said he expects quarterback Daniel Jones to face the Bengals, but that might change or be shortened with the injuries at center.

“Max will be fine. Max will be prepared,” Johnson said. “He’s a veteran, but if it’s not Max, it would be somebody else.”

The Giants did get defensive line coach Andre Patterson back this week after he missed the start of camp with an undisclosed illness.

Patterson said he was not able to help early in camp but he has stayed in touch with Daboll and assistant line coach Bryan Cox. He also started reviewing video from practice and spent time on the phone with players, telling them what he wanted them to do.