NFL At 100: AP Was There, Giants spoil Patriots' perfection 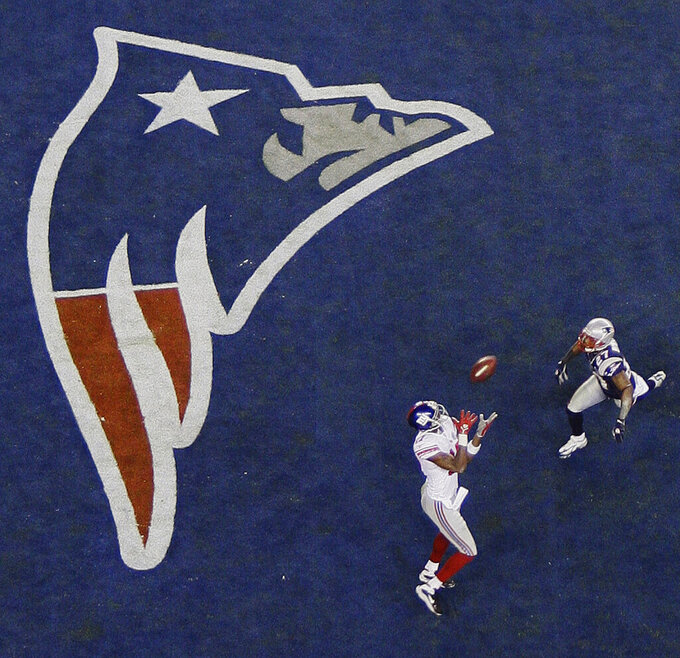 FILE - In this Feb. 3, 2008, file photo, New York Giants' Plaxico Burress, left, catches the game-winning touchdown pass in front of New England Patriots' Ellis Hobbs III during the final minute of the Super Bowl XLII football game at University of Phoenix Stadium in Glendale, Ariz. For the first time in 42 Super Bowls, there were three fourth-quarter lead changes. It ended with Plaxico Burress catching a game-winning 13-yard pass in the left corner with :35 remaining for a 21-17 win. (AP Photo/David J. Phillip, File) 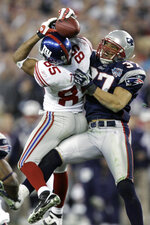 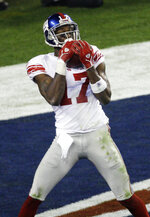 As part of its celebration of its 100th season, the NFL is designating a Game of the Week, each chosen to highlight a classic matchup. For Week 6, it is the Thursday night game between the Giants and Patriots.

To mark each Game of the Week, the AP will be reprinting its story of a classic matchup in the rivalry. The following is the story from the 2008 Super Bowl, when the Giants ended New England's perfect season, first published on Feb. 3, 2008, and written by Pro Football Writer Barry Wilner.

GLENDALE, Ariz. (AP) — With the Super Bowl on the line, look who had the perfection thing down Pat: Eli Manning and the road-conquering New York Giants.

And what a beauty their 11th straight road victory was, a 17-14 Super Bowl win Sunday that shattered the New England Patriots' unblemished season.

In one of the biggest upsets in Super Bowl history, Manning, New York's unlikely Mr. Cool, hit Plaxico Burress on a 13-yard fade with 35 seconds left. It was the Giants' fourth consecutive postseason away win and the first time the Patriots tasted defeat in more than a year.

"There's something about this team," Manning said. "The way we win games, and performed in the playoffs in the stretch. We had total confidence in ourselves. The players believed in each other."

It was the most bitter of losses, too, because 12-point favorite New England (18-1) was one play from winning and getting the ultimate revenge for being penalized for illegally taping opponents' defensive signals in the season opener against the New York Jets.

The Giants had the perfect answer for the suddenly imperfect Patriots: a big, bad defense and the improbable comeback led by Manning. Yes, Eli Manning, who outplayed league MVP Tom Brady and furthered the family legacy one year after older brother Peyton led Indianapolis to the title.

It was how Eli and the Giants did it.

After Brady found Randy Moss for a 6-yard touchdown with 2:42 to go, New England's defense couldn't stop a final, frantic 12-play, 83-yard drive. It featured Manning's unlikely sack-avoiding scramble and a spectacular leaping catch by David Tyree, who had scored New York's first touchdown on the opening drive of the fourth quarter.

"It's the greatest feeling in professional sports," Burress said before bursting into tears.

"That's a position you want to be in," said Manning, who followed Peyton's MVP performance last year with one of his own. "You can't write a better script. There were so many big plays on that drive."

The Patriots were done in not so much by the pressure of the first unbeaten season in 35 years as by the pressure of a smothering Giants pass rush. Brady, winner of his first three Super Bowls, was sacked five times, hurried a dozen more and at one point wound up on his knees, his hands on his hips following one of many poor throws in New England's lowest scoring game of the season.

Hardly a familiar position for the record-setting Patriots and their megastar quarterback. This time, it wasn't the Patriots but the Giants making the game-winning rally. This time, the unflappable quarterback making the clutch play wasn't Brady but Manning, who had been booed by Giants fans for most of his four seasons for a lack of emotion.

Oddly, it was a loss to the Patriots that sparked New York's stunning run to its third Super Bowl and sixth NFL title. New England won 38-35 in Week 17 to finish the spotless regular season. But by playing hard in a meaningless game for them, the Giants (14-6) gained something of a swagger and Manning found his footing.

Their growing confidence carried them through playoff victories at Tampa, Dallas and Green Bay, and then past the mightiest opponent of all.

Not that the Patriots were very mighty this day. They even conceded with 1 second on the clock as Belichick ran across the field to shake the hand of jubilant Giants coach Tom Coughlin, then headed to the locker room, ignoring the final kneel down.

That it was Manning taking the knee was stunning. He showed the maturity and brilliant precision late in the game usually associated with, well, Brady.

"We just hung in there on offense, kept executing," said Burress, who wasn't far off on the 23-17 prediction he made a few days ago. "It came down to one play and we made it."

The Giants became the first NFC wild card team to win a Super Bowl; four AFC teams have done it. They also are the second wild-card champions in three years, following the Pittsburgh Steelers after the 2005 season.

The upset also could be viewed as a source of revenge not only for the Giants, but for the other NFL teams over Spygate back in September. That cheating scandal made headlines again late in Super Bowl week, and could have placed an infinite cloud over New England's perfection.

Until the frantic fourth quarter, the only scoring came on the game's first two drives.

The Giants did almost exactly what they sought with the opening kickoff, using up nearly 10 minutes to go 63 yards. Almost exactly, but not quite, because they settled for a 32-yard field goal after converting four third downs on the 16-play series. The 9:59 drive was the longest in Super Bowl history.

That 3-0 lead lasted for the rest of the quarter, but only because the Patriots were stopped at New York's 1 as the period expired. On the next play, Laurence Maroney scored.

It was the fewest possessions in the first quarter of a Super Bowl.