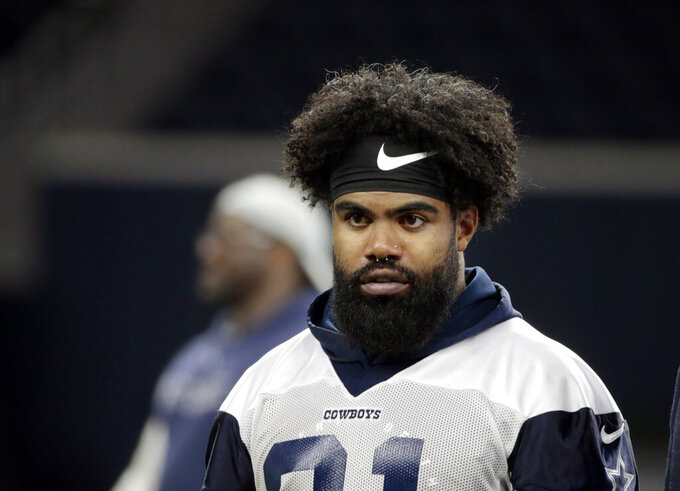 FILE - In this May 22, 2019 file photo Dallas Cowboys running back Ezekiel Elliott (21) walks off the field after NFL football practice in Frisco, Texas. Elliott won't face criminal charges in Las Vegas stemming from a scuffle with a security guard at a music festival in May. Clark County District Attorney Steve Wolfson said Tuesday, Aug. 20, 2019, he and police concluded the results of an investigation "lacked prosecutorial merit." (AP Photo/Michael Ainsworth, file)

FRISCO, Texas (AP) — Ezekiel Elliott has everything on hold for the Dallas Cowboys.

The running back's holdout clouds the expectations for a franchise longing to return to the Super Bowl for the first time since the last of five championships nearly 25 years ago.

The Cowboys have a fourth-year quarterback already with two NFC East titles in Dak Prescott; a receiver ready to show what production for a full season looks like in Amari Cooper; and a defense with an established star in pass rusher DeMarcus Lawrence and two emerging ones in linebackers Jaylon Smith and Leighton Vander Esch.

Oh, and tight end Jason Witten came out of retirement in part because he thought the Cowboys could make the Super Bowl run that eluded him for 15 years before he tried broadcasting for a season.

Elliott's teammates believe their two-time NFL rushing champion will return before the opener Sept. 8 at home against the New York Giants. However, the point at which his absence really matters is now measured in days instead of weeks.

"My gosh, look what he's done in his time in the NFL," said Witten, the franchise leader in catches and yards receiving who is about to set the club mark with his 16th season. "And you're not the same when someone like that's not on the field. No excuses. You've got to go find ways, different ways to do it."

Elliott wants a new contract with two years remaining on the rookie deal signed after the Cowboys drafted him fourth overall in 2016. While Prescott was the NFL Offensive Rookie of the Year during their remarkable first season together, Dallas has an offense built around its primary runner.

The Cowboys were a .500 team when Elliott was suspended six games over domestic violence allegations in 2017. They lost three straight to teams that finished with winning records before three straight wins over losing teams.

"The game is certainly different when Zeke is behind us," said center Travis Frederick, who is back after missing last season with a nerve disorder. "But it's our job to do what we do no matter what the situation is. I think that it probably changes things a little bit, makes all our jobs a little bit harder."

Things to consider with the Cowboys seeking a second straight season with at least 10 wins for the first time since the last of six straight in 1996:

Rookie running back Tony Pollard, a fourth-round pick, was impressive early in the preseason. The Cowboys believed they were drafting a prototypical runner even though the speedy Pollard was mostly a kickoff returner and change-of-pace back at Memphis. Sure enough, his first professional touchdown was a 14-yard run on a cut inside to cap a 97-yard drive.

Alfred Morris, Elliott's primary replacement during the suspension two years ago, is back after signing early in training camp. Dallas drafted another back in Mike Weber Jr., from Elliott's alma mater of Ohio State.

Prescott is 32-16 and coming off his first playoff victory while trying to get past the divisional round after falling short twice. He led a franchise-record 11-game winning streak as a rookie after Tony Romo got hurt. The Packers won at the top-seeded Cowboys with a remarkable play by Aaron Rodgers to set up a winning field goal. The Dallas run defense had a letdown in last season's loss at the Rams.

"Each and every year you have confidence and you say this is the year, you say that we've got a great team," said Prescott, whose contract is also an issue, along with Cooper, with both in the final year of their rookie deals. "But you looking around at this team, the roster that we have, the talent, the leaders that we have, it's to win and it's to win everything."

Kellen Moore, who just turned 30, replaced Scott Linehan as offensive coordinator a year after retiring and becoming Prescott's position coach. Even in the preseason, the offense looks more imaginative. Randall Cobb, one of Rodgers' favorite targets during eight seasons in Green Bay, is the new slot receiver. He and Cooper are good mentors for promising second-year player Michael Gallup.

Lawrence (shoulder) and cornerback Byron Jones (hip) missed the offseason following surgeries but are expected to be ready by Week 1. Lawrence came off the physically unable to perform list in the fourth week of camp. Safety Xavier Woods has had a strong camp after Dallas decided not to pay big money for free agent Earl Thomas, who went to Baltimore.

BACK ON THE HOT SEAT

Coach Jason Garrett is in the final year of his contract, just as he was five years ago coming off three straight 8-8 seasons that ended with losses that kept Dallas out of the playoffs. The Cowboys went 12-4 in 2014, won a wild-card game and lost to Green Bay in the divisional round. After another divisional loss last season, it might take a deeper run for another five-year deal for Garrett. "I never really think about that," he said. "I never thought about that as a player. I don't think about that as a coach."