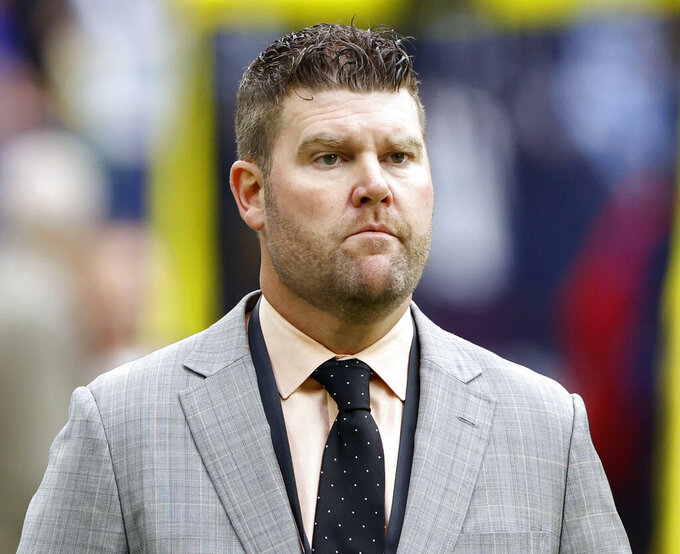 FILE - Tennessee Titans general manager Jon Robinson looks on during warmups before an NFL football game against the Houston Texans, Oct. 30, 2022, in Houston. Robinson has said offseason NFL rule changes force teams to be choosy about whether to place a player on injured reserve or take the salary cap hit of keeping two players on the active roster when only one can play. (AP Photo/Matt Patterson, File)

Molden didn't worry that the injured groin putting him on injured reserve Sept. 9 would cost him a full season even after an offseason NFL rule change limiting teams to bringing back only eight players from injured reserve to the active roster this season.

“It is definitely a game that the front office plays, you know chess, not checkers," Molden said. "So I talked with my agent, talked with the coaches and front office and let them work it out.”

As the NFL hits the halfway point of the season, Molden remains on injured reserve as one of 13 Titans sidelined by injury. That's the most in the league per Spotrac.com, a year after the Titans set an NFL record last season using an NFL record 91 different players in a non-strike season.

The Titans already are halfway to the 26 placed on injured reserve a year ago and used the unlimited return rule to help earn the AFC's No. 1 seed.

They are among at least eight teams with at least 10 players on IR as of Monday, a number that changes daily. That includes the defending champion Rams at 11 after finishing last season with only nine. Among that group is starting left tackle Joseph Noteboom, who replaced Andrew Whitworth after his retirement.

The rule changes means every NFL team has to think very carefully about injuries. Not only did the NFL limit the number that can return, but players now must spend four games instead of three on injured reserve. Practice squads stayed at 16 to ensure available players in shape to provide needed help when injuries hit.

“There’s a line that the league worries about roster stashing, just putting guys on to get another guy so I think you want to make sure that people aren’t stashing,” Beane said. “That’s going to be what the league stance is. I think it’s come to a pretty good medium.”

Under early injured reserve rules, a player was out for a year. Then in 2012, the NFL allowed teams to designate one player to return before doubling that in 2017. The coronavirus pandemic led the NFL to allow teams to bring back an unlimited number of players from injured reserve for 2020 and 2021.

“Now it's down to four weeks, and I think that's more reasonable because fans pay to see these good players,” Beane said. “And if you put a good player down you want to be able to bring him back.”

Dallas (6-2) hopes to get left tackle Tyron Smith back in December after tearing a hamstring late in training camp. The Cowboys, with 12 on injured reserve, also lost long snapper Jake McQuaide (torn triceps) and slot corner Jourdan Lewis (broken foot) for the season.

San Francisco (4-4) has nine on injured reserve and has been hit hard.

Quarterback Trey Lance is out for the season, while both starting defensive tackles, including Javon Kinlaw, are out. Niners coach Kyle Shanahan says everyone gets frustrated with the injuries, especially those that have decimated the defensive line.

“It just makes it harder to perform at the level we need them to the more they’re out there, but that’s part of the NFL,” Shanahan said. "And it’s why you want depth, and it’s why you hope guys can return and not have too bad of injuries.”

Teams also have to balance risk versus reward when deciding whether or not to put a player on injured reserve. Bring someone back too soon, it could cost a team the chance to bring back another player. Keeping a player on the roster also gets expensive.

“A, you potentially could get the player back sooner than the four-week mandate and B, there’s cap implications because you’re going to be paying two players to really do one job and you’ve got to account for that salary cap wise,” Titans general manager Jon Robinson said.

Deciding when to bring a player back starts with opening a 21-day practice window. Robinson said the player has to tell team officials how he really feels along with feedback from team doctors and watching how the player practices.

“Ultimately, you’re going to err on the side of caution when it comes to the health and safety of the player,” Robinson said.

The big question is whether the eight-player limit in a 17-game season is too few, and that's something nobody will really know until after this season. Committees will break down the numbers before the league's spring meetings to see if a limit of eight was the correct amount.

“Let’s see this year how many teams max it out at eight, and I think if a lot of teams are maxing out that means it probably is,” Beane said.