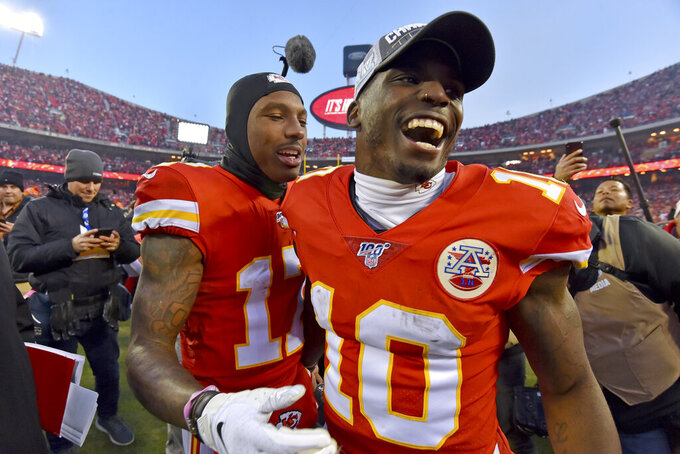 Sun. Feb. 2, Super Bowl, San Francisco vs. Kansas City, 6:30 p.m. Jimmy Garoppolo and the 49ers (15-3) advanced to their first Super Bowl in seven years, and the franchise's seventh overall. San Francisco is the third team to make it to the Super Bowl a year after winning four or fewer games, joining Cincinnati (1988) and the Rams (1999). Patrick Mahomes led the Chiefs (14-4) into their first Super Bowl since 1970. Kansas City coach Andy Reid is back in the Super Bowl for the first time since the 2004 season, when his Philadelphia Eagles lost to New England — a gap that is second longest to Dick Vermeil's hiatus.

— Patrick Mahomes, Chiefs, passed for 294 yards and three touchdowns and also scrambled 27 yards for another score to lead Kansas City to the Super Bowl for the first time since 1970 with a 35-24 victory over the Tennessee Titans.

— Robbie Gould, 49ers, kicked three field goals and made all four of his extra points in San Francisco's 37-20 win over Green Bay.

— Nick Bosa, 49ers, helped set the tone when he ended Green Bay's second drive of the game with a 13-yard sack of Aaron Rodgers in San Francisco's 37-20 win.

San Francisco's Raheem Mostert ran for a team-record 220 yards in the 49ers' 37-20 win over Green Bay, second in NFL playoff history only to Eric Dickerson's 248 for the Rams against Dallas in 1986. He was the first player to rush for at least four TDs and 200 yards in a playoff game. ... Kansas City's Patrick Mahomes became the sixth quarterback since 1950 to record multiple games with 50 or more yards rushing in a single postseason, joining Joe Montana, Otto Graham, Steve McNair, Colin Kaepernick and Russell Wilson. Mahomes also joined Montana (1984) as the only players with 250 or more yards passing, three or more TD passes and 50 or more yards rushing in multiple playoff games. ... Aaron Rodgers passed Brett Favre for the most touchdown passes in Green Bay Packers postseason history with 40.

San Francisco's Jimmy Garoppolo was 6 of 8 for 77 yards in a 37-20 win over Green Bay. The 49ers joined Don Shula's 1971 and 1973 Dolphins (twice) as the only teams to finish a playoff game with fewer than 10 pass attempts in the Super Bowl era. ... Kansas City advanced to the Super Bowl for the first time since teh 1969 season with a 35-24 win over Tennessee. The Chiefs defeated Minnesota 23-7 to win the last Super Bowl in which they appeared. ... Tennessee running back Derrick Henry was held to 69 yards on 19 carries by Kansas City after rushing for 588 yards in the past three games.

The odds for the Super Bowl between San Francisco and Kansas City opened at pick 'em Sunday at many Las Vegas sports books, though the Chiefs quickly moved to 1-point favorites. Early bettors favored the Chiefs in a game that will almost surely set new legal betting records. Bettors at the Westgate Las Vegas Superbook got an early start after they were offered the pick 'em odds at halftime of the NFC championship game. Oddsmaker Jay Kornegay said about 80 percent of the early money was on the Chiefs and the line moved to Chiefs minus-1. The over/under total started at 51 1/2 and was at 53 after a bettor put $110,000 on the over.

Tennessee offensive lineman Dennis Kelly became the heaviest player — at 321 pounds — with a touchdown catch in NFL postseason history, getting a 1-yard grab in the Titans' 35-24 loss at Kansas City. The backup tackle is the only offensive lineman since 2000 with two TDs receiving in a season after he also had one against Jacksonville. At 6-foot-8, Kelly also tied Philadelphia's Harold Carmichael as the tallest player in NFL history to catch a touchdown pass in the playoffs.

A week after they overcame a 24-0 deficit against Houston, the Kansas City Chiefs had to rally again against Tennessee in a 35-24 win. Down 10-0 and 17-7, Kansas City didn't flinch, building a 35-17 lead while controlling the clock with a strong ground game. Naturally, Patrick Mahomes complemented that with sharp passing, spreading the ball on short and deep throws. The dagger came with a 60-yard completion to Sammy Watkins for the Chiefs' 28th straight point midway in the final period.

“Fired up to go to Miami, got to get on a diet so I can fit into my clothes. Very proud.” — Chiefs coach Andy Reid after Kansas City advanced to the Super Bowl for the first time since 1970 with a 35-24 victory over Tennessee.

“Our team, it’s incredible to be a part of. We can win so many different ways. Raheem (Mostert), those guys up front, the tight ends obviously were just dominating tonight. It was fun.” — 49ers quarterback Jimmy Garoppolo after San Francisco's 37-20 win over Green Bay to reach the Super Bowl.