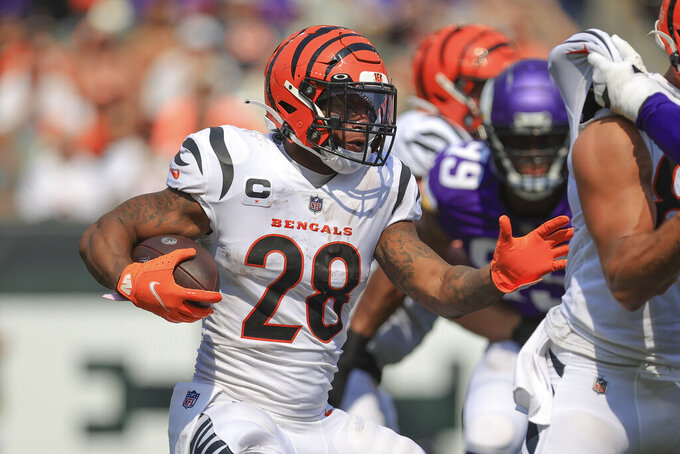 Cincinnati Bengals running back Joe Mixon (28) runs against the Minnesota Vikings during the second half of an NFL football game, Sunday, Sept. 12, 2021, in Cincinnati. (AP Photo/Aaron Doster)

Baltimore at Las Vegas, 8:20 p.m. EDT. Lamar Jackson will look to lead the Ravens to their sixth straight season-opening win. They'll have to do it with a backfield hit by season-ending injuries to J.K. Dobbins, Gus Edwards and Justice Hill. Meanwhile, Derek Carr and the Raiders will be playing their first regular-season game in front of fans since moving to Las Vegas from Oakland.

— Jameis Winston, Saints, tied a career high with five touchdown passes in New Orleans’ 38-3 victory over Green Bay in Jacksonville after the team was displaced by Hurricane Ida.

— Kyler Murray, Cardinals, threw for 289 yards with a career-high four TD passes and had a 2-yard TD run to lead Arizona to a 38-13 rout at Tennessee.

— Russell Wilson, Seahawks, was 18 of 23 for 254 yards and threw three of his four touchdown passes in the first half to lead Seattle to a 28-16 victory at Indianapolis.

— Patrick Mahomes, Chiefs, threw for 337 yards and three touchdowns while running for another score to help Kansas City rally against Cleveland for a 33-29 victory.

— Matthew Stafford, Rams, passed for 321 yards and three touchdowns in a dynamic debut for Los Angeles, which beat Andy Dalton and the Chicago Bears 34-14.

— Justin Herbert, Chargers, threw for 337 yards and overcame a fumble into the end zone and a red-zone interception by leading scoring drives of 75, 76 and 68 yards, with a go-ahead touchdown pass to Mike Williams in Los Angeles' 20-16 win at Washington.

— Joe Mixon, Bengals, rushed for 127 yards and a touchdown in his return from a foot injury that sidelined him much of last season, helping Cincinnati to a 27-24 overtime victory over Minnesota.

— Elijah Mitchell, 49ers, filling in for injured Raheem Mostert, had a tiebreaking, 38-yard touchdown run early in the second quarter and finished with 104 yards rushing in San Francisco's 41-33 win at Detroit.

— Melvin Gordon III, Broncos, had 70 of his 101 yards rushing on a late touchdown run in Denver's 27-13 victory over the New York Giants.

— David Montgomery, Bears, rushed for 108 yards and a touchdown in Chicago's 34-14 loss to the Los Angeles Rams.

— Tyreek Hill and Travis Kelce, Chiefs. Hill caught 11 passes for 197 yards and a touchdown to help Kansas City rally to beat Cleveland 33-29, while Kelce had two TD catches and finished with six receptions for 76 yards.

— Christian Kirk and DeAndre Hopkins, Cardinals, each had two touchdown receptions in Arizona's 38-13 victory at Tennessee.

— Evan McPherson, Bengals, kicked a 33-yard field goal as time expired in overtime to push Cincinnati to a 27-24 win over Minnesota.

— Kicker Matt Ammendola, Jets, took over punting duties when Braden Mann injured his left knee and averaged 48.5 yards on six kicks — including a 65-yarder — in New York's 19-14 loss at Carolina.

— Miles Killebrew and Ulysees Gilbert, Steelers. Killebrew block Matt Haack’s punt and Gilbert scooped up the loose ball at the Buffalo 9 and ran it in untouched for a touchdown in Pittsburgh's 23-16 win.

— Chandler Jones, Cardinals, had a career-high five sacks and forced two fumbles that Arizona turned into 14 points in a 38-13 win at Tennessee.

— T.J. Watt, Steelers, had two sacks and a forced fumble in his first game after signing a four-year, $112 million contract extension that made him the NFL’s top-paid defensive player, helping Pittsburgh to a 23-16 victory at Buffalo.

— Xavien Howard , Dolphins, recovered a fumble in the fourth quarter to help Miami hold on for a 17-16 win over New England.

— Shaq Thompson, Panthers, had 10 tackles, a sack, an interception and broke up three passes in Carolina's 19-14 win over the New York Jets.

Patrick Mahomes passed for 337 yards and three touchdowns in Kansas City's 33-29 win over Cleveland, giving him 14,489 yards passing in 47 starts. That surpassed Pro Football Hall of Famer Kurt Warner (14,372) for the most by a player in his first 50 career starts. Mahomes' 117 touchdown passes topped Pro Football Hall of Famer Dan Marino (116) for the most in a player's first 50. ... Justin Herbert threw for 337 yards in the Los Angeles Chargers' 20-16 win at Washington, joining Mahomes as the only players in league history with 4,500 yards passing in his first 16 career starts. ... Arizona's Kyler Murray has four career games with at least three touchdown passes and one rushing touchdown, tying Josh Allen and Jack Kemp for the most such games in a player's first three seasons.

With their 33-29 loss to Kansas City, the Browns fell to 1-21-1 in season openers since returning to Cleveland in 1999, extending their NFL mark to 17 consecutive defeats. They haven’t won an opener on the road since the 1994 season. ... The Chargers went 14 of 19 on third downs in Los Angeles’ 20-16 victory at Washington. ... Russell Wilson led Seattle to touchdowns on its first two drives and posted a perfect passer rating of 158.3 in the first half of the Seahawks' 28-16 win at Indianapolis. He finished with the second-highest single-game rating of his 10-year career, 152.3, and his four TD passes were one short of matching his career high. ... Indianapolis QB Carson Wentz fell to 0-6 all time against Seattle, losing 28-16 in his Colts debut. ... Pittsburgh's Ben Roethlisberger posted his 36th career fourth-quarter comeback in a 23-16 win at Buffalo to tie Drew Brees for third on the NFL's career list. ... Minnesota was penalized 12 times for 116 yards, including for three false starts on the first drive of the game in a 27-24 overtime loss at Cincinnati. The Vikings had four penalties on their first eight plays. ... Trevor Lawrence's 332 yards passing in Jacksonville's 37-21 loss at Houston were the third-most yards by a No. 1 overall pick in his first career start in the Super Bowl era. Only Carolina's Cam Newton (422 in 2011) and Tampa Bay's Vinny Testaverde (369 in 1987) had more. ... Rams coach Sean McVay improved to 5-0 in season openers with Los Angeles' 34-14 win over Chicago.

Meyer lost the first season opener of his head coaching career after entering the game having won 17 straight openers as a college coach.

Staley's Chargers won at Washington, 20-16. Robert Saleh and the New York Jets fell 19-14 on the road at Carolina, while Dan Campbell and Detroit were defeated 41-33 at home against San Francisco.

Three of the five quarterbacks drafted in the first round in April started in Week 1, and all lost.

Jacksonville's Trevor Lawrence, the No. 1 overall pick, threw three touchdown passes but also tossed three interceptions in the Jaguars' 37-21 loss at Houston. Zach Wilson, the No. 2 selection, had two TDs and an INT in the New York Jets' 19-14 defeat at Carolina. Mac Jones, who went 15th overall, was 29 of 39 for 281 yards and a touchdown in New England's 17-16 loss to Miami. He was the first rookie quarterback to start for the Patriots since Drew Bledsoe in 1993.

Trey Lance, the third overall pick, didn't start over Jimmy Garoppolo but threw a 5-yard touchdown pass in San Francisco's 41-33 win at Detroit. Chicago's Justin Fields, taken 11th overall, was the backup to Andy Dalton for the Bears' 34-14 loss to the Los Angeles Rams but threw two passes for 10 yards and also had a 3-yard touchdown run.

HOME ON THE ROAD

Jameis Winston passed for five touchdowns, and the hurricane-displaced Saints kicked off the post-Drew Brees era with a strikingly dominant 38-3 victory over the Green Bay Packers in Jacksonville. The game, originally scheduled for the Superdome, was moved while the New Orleans area continues to clean up wreckage left by Hurricane Ida, which struck southeast Louisiana as a Category 4 storm on Aug. 29 — 16 years to the day after Hurricane Katrina devastated the same region. After canceling their final preseason game and practicing two weeks in the Dallas area, the Saints looked as sharp playing at the home of the Jaguars. “We knew that even though some people don’t have power, they’re going to find a way to watch the Saints,” linebacker and captain Demario Davis said. “That’s just what this team means to the city — and the city means the same to us.”

Matthew Stafford, acquired from Detroit in the offseason, passed for 321 yards and three touchdowns in one of the most prolific quarterback debuts with a new team in NFL history, leading the Los Angeles Rams past Andy Dalton and the Chicago Bears for a 34-14 victory. The Rams scored on six of Stafford’s first seven full drives while racking up 375 yards of offense. According to the Elias Sports Bureau, Stafford became the first player with two touchdown passes of more than 50 yards in his debut for a new team since Lee Grosscup did it for the AFL’s New York Titans in 1962. Stafford’s 156.1 passer rating is the highest in NFL history for a quarterback who had at least 20 pass attempts in a debut with a new team, according to NFL Research.

Sam Darnold threw for 279 yards and a touchdown and ran for another score against his former team, helping the Carolina Panthers defeat the New York Jets 19-14 on Sunday for their first win in a season opener since 2018. He connected on a 57-yard touchdown pass with fellow ex-Jet Robby Anderson. Darnold said seeing the Jets on the other sideline was “a little different,” but insisted once the game began he pretty much forgot about it. “I mean, I’m sure later tonight or tomorrow when I’m watching the game I’ll start to feel that, but it was just good to get a win,” Darnold said.

Arizona's Chandler Jones became the third player to record at least five sacks in a Week 1 game since 1982, when it became an official statistic, joining Kansas City's Derrick Thomas (six in 1998) and Detroit's William Gay (5 1/2 in 1983). Jones was also the sixth player to get at least five sacks and two forced fumbles in a single game since 2002.

Washington quarterback Ryan Fitzpatrick was lost to a right hip injury midway through the second quarter of a 20-16 loss to the Los Angeles Chargers. Coach Ron Rivera did not have an update on Fitzpatrick and said he hopes to know more about the 38-year-old’s status Monday. ... Denver wide receiver Jerry Jeudy was carted off the field in a 27-13 win over the New York Giants with a high ankle sprain. ... San Francisco running back Raheem Mostert and cornerback Jason Verrett both injured a knee in the 49ers' 41-33 loss at Detroit. ... Lions cornerback Jeff Okudah left with a foot injury that coach Dan Campbell thought could be his Achilles tendon. ... Cleveland left tackle Jedrick Wills injured an ankle in the Browns' 33-29 loss to Kansas City. ... New York Jets left tackle Mekhi Becton left in the third quarter of a 19-14 loss at Carolina with a knee injury. Punter Braden Mann (knee), safety Lamarcus Joyner (elbow) and linebackers Jamien Sherwood (ankle) and Blake Cashman (hamstring) were also hurt. ... Arizona offensive lineman Kelvin Beachum left early in a 38-13 win at Tennessee with a rib injury.

“Losing is always hard, especially when you feel like you are prepared and had a great week. I really think we were ready and obviously didn’t play well. It starts with me. I didn’t play well, for sure. I played really bad.” — Jacksonville quarterback Trevor Lawrence, who had three TD passes and three interceptions in his NFL debut, a 37-21 loss at Houston.

“Fantasy football owners, we made it to Week 1. We made it through. Hopefully I got points for y’all.” — Los Angeles Chargers running back Austin Ekeler, who had more than 50 text messages earlier in the week when he missed practice for what he called precautionary reasons. He had 15 rushes for 57 yards and a touchdown in a 20-16 win at Washington.