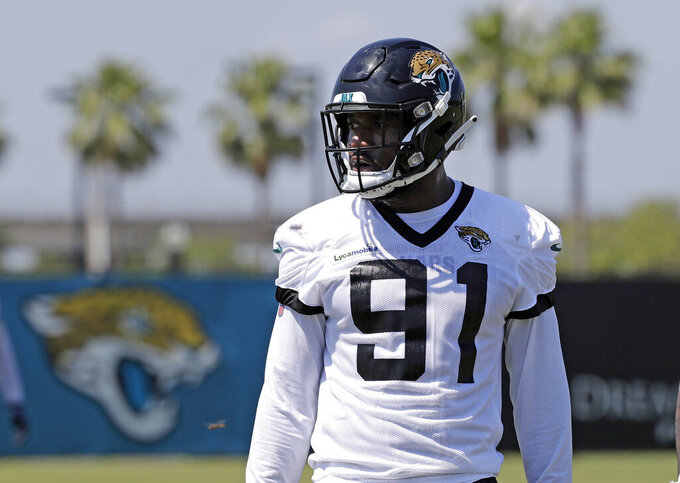 The standout pass rusher reported to Jacksonville Jaguars training camp Sunday following an 11-day absence and is ready to play out his rookie deal. He insisted he's not angry and not worried about risking an injury that could cost him millions.

Ngakoue passed his conditioning test an hour before practice and took his usual spot with the first-team defense. The Jaguars travel to Baltimore later Sunday for two days of joint practices with the Ravens — it's about a 45-minute drive from Ngakoue's hometown.

"At the end of the day, they had a chance to sign me for a long-term deal, but it didn't get done," he said. "I love football, love my teammates and I'm here to play games."

Ngakoue is entering the final year of a $3.84 million contract. He is due to make $2.025 million this fall — far less than other top playmakers at his position. He also is facing $528,650 in fines — more than a quarter of his salary — because he skipped a three-day minicamp in June and nearly two weeks of training camp.

He had been seeking more than $20 million a year, but the Jaguars seemingly don't consider the former third-round draft pick from Maryland a complete or elite defensive end. Jacksonville also selected Ngakoue's potential replacement, Josh Allen from Kentucky, with the seventh overall pick in the NFL draft and is expected to make Jalen Ramsey the league's highest-paid cornerback next year.

Ngakoue is willing to bet on himself in 2019.

"I know my value, I know my worth," he said. "That's all I can say. Doesn't matter about anybody else knowing my value. I showed each and every year."

Being a restricted free agent would have allowed the Jaguars to match any team's contract offer.

Instead, Ngakoue will try to prove his worth to Jacksonville or persuade someone else to give him a lucrative deal in March. The Jags also could use the franchise tag on him next year, locking him up for 2020 or possibly try to trade him.

"I don't get myself involved in that stuff," coach Doug Marrone said. "We're happy to have him back and ready to go."

The 24-year-old Ngakoue had 29½ sacks and 10 forced fumbles the last three seasons. He had with 28 tackles and 9½ sacks last year but had no strip sacks for the first time in his NFL career.

Still, he had hoped to join a list of top-flight pass rushers who have cashed in recently.

Lawrence, Ford and Flowers have each missed multiple games, though.

"I view myself as unique," Ngakoue said. "I don't even compare myself to no other pass-rusher. No disrespect to those guys. ... I'm my own player. I feel like I bring a different aspect to the game. Stats show."