No surprise: NFL quarterbacks making the most money by far 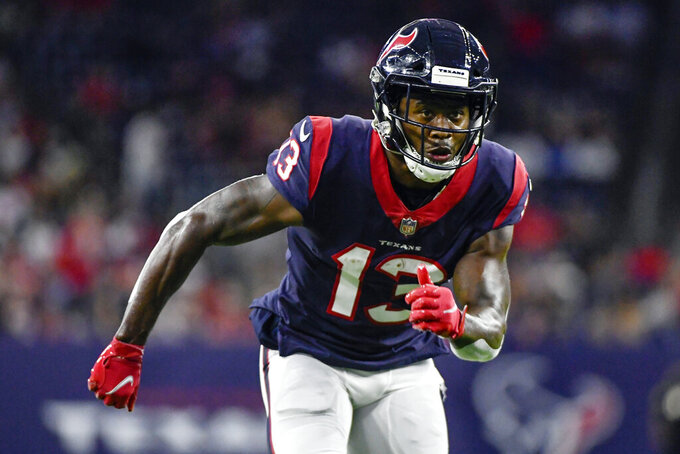 FILE - In this Saturday, Aug. 28, 2021, file photo, Houston Texans wide receiver Brandin Cooks (13) runs a route against the Tampa Bay Buccaneers during the first half of an NFL preseason football game in Houston. Cooks is giving back to QBs and other players by introducing them to a new form of light therapy that he uses for his anxiety and sleep issues called an Allay Lamp. (AP Photo/Justin Rex, File)

On and off the field, NFL quarterbacks — no surprise here — are making the most money. Even in a year when the salary cap has decreased, the big name passers are getting richer.

According to Forbes, the 10 biggest earners will collect about $418 million in salary, endorsements and other earnings. That's an increase of 9% over 2020.

The Cowboys' Dak Prescott tops the list mainly because of the four-year, $160 million contract he landed earlier in 2021. Prescott got a $66 million signing bonus — more money than a majority of NFL players ever see for their careers. So his overall earnings, pending more off-field deals, is at $87 million for the year.

Next up is Tom Brady, who is estimated to make nearly $45 million off the field from his many endorsements. He even has a new weekly radio show on SiriusXM. Overall, Brady will bring in $72.5 million.

The lesson seems to be that even with the salary cap reduced from $198.2 million to $182.5 million, quarterbacks will get their money on the field, and off it.

The first position-specific helmets made for use in the NFL will be on the field this weekend.

The latest helmet from manufacturer VICIS specifically for offensive and defensive linemen was released last winter and received approval from the NFL and players’ union for use in the 2021 season.

VICIS vice president of product development Jason Neubauer said a handful of players are expected to be using the Zero2 Trench helmet to begin the season, and that 30 of the 32 teams in the league have placed an order for the helmet.

VICIS, Riddell, Xenith and Schutt all have made models that have rated highly in the league’s testing in recent years. The VICIS Zero2 Matrix was the highest-rated helmet in testing for 2021 and the Zero2 Trench was second.

The Zero2 Trench, which has additional support in the front where most head impacts take place for offensive and defensive linemen, is a step the league has been pushing toward in the development of position-specific helmets.

Neubauer said VICIS wants to see how well the Trench is received before moving forward with other position-specific development.

“We’re not sure where we’ll go from here,” Neubauer said. “We definitely believe that linemen is the largest group and that we’ve chosen wisely as far as where we should start.”

Founded by NFL agent Don Yee, HUB Football is another tool for free agents to be seen. The majority of its participants are players who recently spent time with NFL teams, but also included in the camps are recent college players seeking their first shot at making an NFL, CFL or other professional roster. The Chargers new placekicker Tristan Vizcaino attended such camps in late 2020.

HUB Football previously hosted four camps this year in San Diego, with another 14 players getting contracts in the CFL. Unlike combine-style workouts, the camps are designed to mimic workouts that take place at NFL facilities. Players do individual work with position coaches, while also competing in one-on-one and team-style drills.

“It’s been very encouraging to see the number of signings coming from players who’ve taken part in HUB Camps,” Yee says. "Clearly, teams around the league have taken notice of the talent level of the players who are coming in to work out, and with HUB we’re providing them with an opportunity that doesn’t exist anywhere else. There’s just no other program out there like this where teams can come in and scout 60 to 70 NFL and CFL-ready free agents in one location in a single day. It’s impossible to find that anywhere else.

“And for the players who are sitting at home waiting for the phone to ring, they now have a place to proactively showcase their skills, rather than waiting or hoping for a team to call them. Players see other players getting signed from our camps and now we have a waiting list of guys itching to get in because of the results we’ve been seeing.”

The next free agent workout camp will be Sept. 29 at Dignity Health Sports Park in Carson, California.

“I never get into the comparison game with my quarterbacks,” Cooks said. “Tyrod is a competitor. He’s been playing this game for a really long time. He’s a natural leader as well. So you love coming to work with him every single day. And I love the way that he goes about his business.”

Cooks is giving back to QBs and other players by introducing them to a new form of light therapy that he uses for his anxiety and sleep issues called an Allay Lamp. This therapy was discovered and patented by Harvard Medical School neuroscientist Dr. Rami Burstein. It uses a specific, narrow band of green light to generate electrical signals in the brain that play a role in relaxation, reduced heart rate/blood pressure and feeling happier.

“Sleep is really something that I struggle with and when they told me it can help me and promote sleep, I tried it out,” Cooks said. “Sleep obviously helps with performance, helps with recovery. It’s been a game changer and I’ve been fortunate enough to know that it affects me so I started to give it to my teammates and players in my agency.”

Quinnen and Quincy Williams had big dreams of playing in the NFL when they were youngsters growing up in Alabama.

They already accomplished that lofty goal, but now they’re teammates for the first time since high school after the New York Jets claimed Quincy off waivers last week from Jacksonville.

“It was dope, man,” Quinnen Williams said. “I really found out when I was walking on the field for practice that day. It’s super exciting for my family, my brothers, my sister. ... I know my mom would be super proud.”

Williams’ mother Marquischa died in 2010 from breast cancer, and Quinnen wears a locket with a picture of his mother every day in her memory. There’s no doubt she would get a kick out of seeing her two sons playing on the same NFL defense. If they play in the same game, they’ll join Larry and Robert Woods (1975-76) as the only Jets siblings to do so.

“It’s amazing to have a great guy like him here,” Quinnen said of Quincy. “He can help the team with his explosiveness, his speed, his knowledge and his football IQ.”

The 25-year-old Quincy is 16 months older than Quinnen, but the two started their pro careers at the same time in 2019. Quinnen was a first-round pick of the Jets — No. 3 overall — out of Alabama, while Quincy was a third-rounder by Jacksonville out of Murray State.

Quincy played in 18 games with the Jaguars at linebacker, including eight starts as a rookie. He dealt with injuries last season and was among Jacksonville’s final cuts this summer.

“It wasn’t one of those things where he was like, ‘Yay, I’m excited to be on your team,’” Quinnen said of Quincy’s reaction to joining him on the Jets. “It was one of those like, ‘Yo, that was the last time I’m getting cut. I’ve got to play my (best) every single week, every single day to let people know that I’m a good football player and not just Quinnen Williams’ brother.’”

Quinnen told his brother he respected that approach, and they now have a common goal — bonded by blood and football brotherhood.

“I told him when you come into this building, bro, I don’t care if you’re my brother or not — we want to win,” the defensive tackle said. “I want to win. ... And I know you’re going to hold me accountable, and I’m going to hold you accountable because that’s what the whole team expects from both of us.”