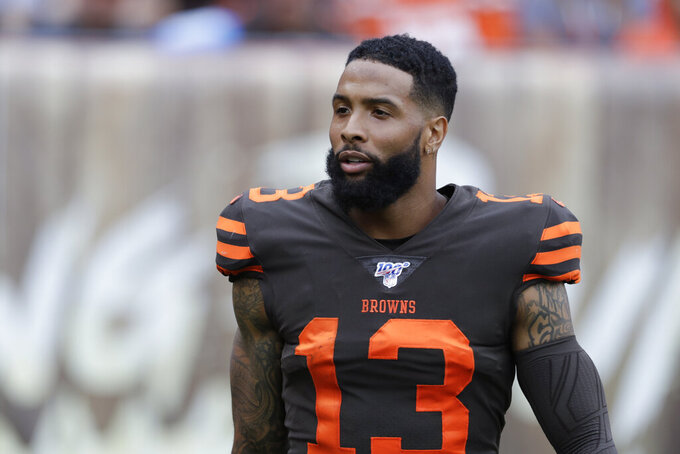 FILE - In this Sept. 8, 2019, file photo, Cleveland Browns wide receiver Odell Beckham Jr. (13) stands on the sideline during the first half in an NFL football game against the Tennessee Titans in Cleveland. Beckham has participated fully in training camp after expressing reservations about whether the NFL should have a season with the coronavirus still spreading. (AP Photo/Ron Schwane, File)

CLEVELAND (AP) — Browns star wide receiver Odell Beckham has fully participated in the early stages of training camp after expressing reservations whether the NFL should forge ahead and have a season with the coronavirus still spreading.

Beckham reported to Cleveland's camp last week, passed the COVID-19 testing and has taken part in all team activities.

On Monday, the flashy receiver was quoted in a Wall Street Journal story as saying he wondered why the league was putting players' health at risk.

“Obviously with everything that’s going on, it doesn’t make sense why we’re trying to do this,” Beckham told the publication, which noted the interview was done two weeks before the NFL and NFLPA agreed on safety guidelines. “I can understand basketball was already in the playoffs. Five-on-five basketball in an arena is going to be more intense than regular-season games. Hooping is different than playing an 11-on-11 contact sport where there’s 80 people in a locker room."

Beckham, who has never been afraid to speak his mind on any topic, went on to question the motivation in playing.

“We’re not ready for football season. So why are we trying to push forward?" he said. "It’s obviously for their money. And that bothers me because there’s always been this — and I hate saying it like that — but the owners’ (attitude is), ‘Oh, we own you guys,’ and just kind of that unfairness going on that they don’t see us as human. I just feel like the season shouldn’t happen and I’m prepared for it to not happen and I wouldn’t mind not having it.”

Perhaps to show the 27-year-old receiver is committed to playing, the Browns posted a photo on Twitter of Beckham running inside their training facility while wearing a black surgical mask.

The team has had two offensive linemen — guard Drew Forbes and tackle Drake Dorbeck —- opt out due to the virus. The Browns also placed third-string quarterback Garrett Gilbert on the reserve/COVID list and activated punter Jamie Gillan from it.

By Teresa M. Walker 39 minutes ago
By Will Graves an hour ago
By The Associated Press 5 hrs ago
By Mitch Stacy 14 hrs ago
By Josh Dubow 14 hrs ago