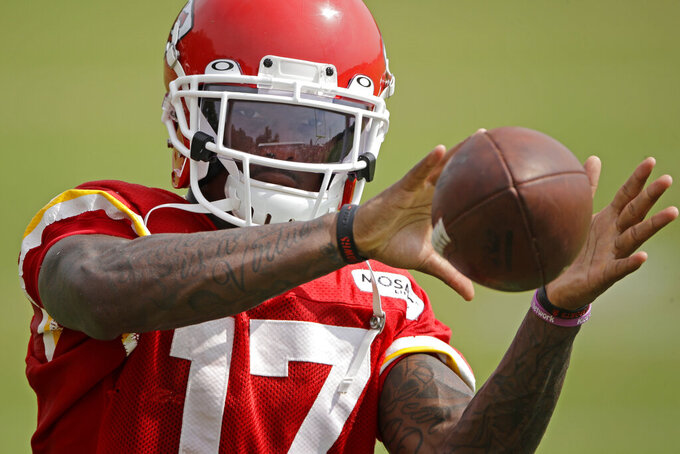 ST. JOSEPH, Mo. (AP) — The day that Patrick Mahomes checked into Scanlon Hall on the campus of Missouri Western for the start of training camp, he was greeted by Kansas City Chiefs coach Andy Reid, offensive coordinator Eric Bieniemy and quarterbacks coach Mike Kafka — the same trio that guided the young quarterback to a record-setting debut season as the starter.

It was a welcoming, comforting reunion.

The Chiefs went through a wholesale overhaul of their porous defense over the offseason, hiring a new coordinator, new assistants and bringing in eight new starters — give or take. But continuity is what defines the other side of the ball, and that could help Mahomes match or even surpass the 5,000-plus yards passing and 50 touchdown tosses he had while leading the Chiefs to the brink of a Super Bowl.

"Obviously I feel different having a season under my belt where I got to play all 16 games in the season and then playoff games," he said. "Just knowing what to do, another year under my belt and knowing what I need to do each and every day in order to have success on the field."

One of the biggest downfalls to success is change. Teams that win games, advance in the playoffs and win championships tend to lose their best coaches to better jobs at rival organizations.

That was the case when then-Chiefs offensive coordinator Doug Pederson was plucked by Philadelphia, then guided the Eagles to a Super Bowl title. And it was the case a couple of years later, when Chicago took his replacement, Matt Nagy, and the Bears proceeded to march into the playoffs last season.

Bieniemy got some looks for head coaching jobs after last season, too, but ultimately returned to the Chiefs as their offensive coordinator. And with Kafka back to tutor Mahomes, the brain trust that guided the Chiefs to a third consecutive AFC West title is back intact.

That has allowed the Chiefs to build on last season, rather than spending time getting up to speed, and that means plugging even more information into their league MVP's head.

It isn't just the coaching staff that returns together, either.

Mahomes is still handing off to Damien Williams, who filled in admirably after the midseason loss of Kareem Hunt last season. He is still tossing passes to Tyreek Hill and Demarcus Robinson, enjoying a big-play safety valve in Travis Kelce and the protection of fullback Anthony Sherman.

Up front, four of the Chiefs' five starting offensive linemen return, as do a pair of backups in Cameron Erving — who has plenty of starting experience — and Kahlil McKenzie.

The Chiefs could have eight new starters on defense. They have eight returning on offense.

"When I got here it was such a young line," left tackle Eric Fisher said, "but now we have a whole bunch of veteran dudes, and we had some injuries last year and guys stepped in. There's no drop."

The newcomers to the offense figure to make it even better, too.

In other words, there are plenty of reasons to expect the Chiefs' offense to be just as dynamic as it was last season. Maybe even more.

NOTES: DEs Frank Clark (wrist) and Alex Okafor (hip), DL Emmanuel Ogbah and WR Gehrig Dieter (back) did not practice Wednesday. ... RB Damien Williams (hamstring) returned to the field for the first time since the first day of practice. He ran with the starters the second half of practice. ... DEs Breeland Speaks and Tanoh Kpassagnon got time with the starters due to injuries at their position.