Oldie but goodie Patterson an offensive breakout star in '21 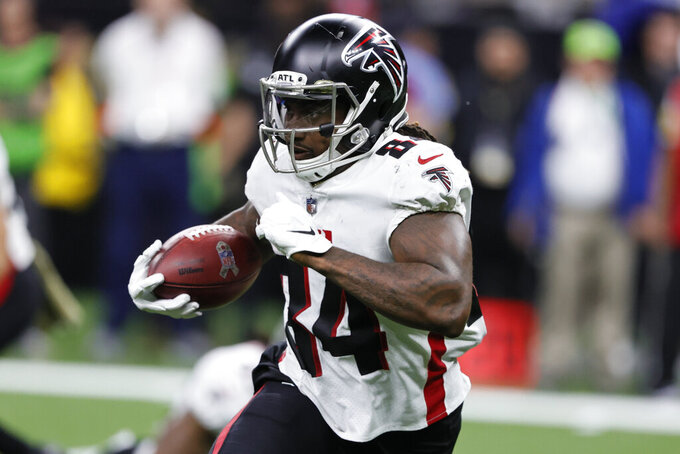 Atlanta Falcons running back Cordarrelle Patterson (84) runs against the New Orleans Saints during the second half of an NFL football game, Sunday, Nov. 7, 2021, in New Orleans. (AP Photo/Butch Dill)

ENGLEWOOD, Colo. (AP) — It's hard to think of a 30-year-old veteran, a four-time All-Pro and four-time Pro Bowl selection as a breakout player.

But that's exactly what Cordarrelle Patterson has become in his first season with the Falcons, transforming himself from a kick return specialist and spot wide receiver into a bona fide threat out of Atlanta's backfield.

“Honestly, it doesn't matter where they put me on the football field,” Patterson said. “I just try to go out there and make a play for my team. It's something I've been doing my whole life.”

With nine years under his belt and on his fifth NFL team since the Minnesota Vikings used a first-round pick on him in 2013, Patterson is making the most of the first feature role he's really ever had.

Patterson leads the Falcons (4-4) with a single-season career-high 737 yards from scrimmage (459 receiving, 278 rushing) and seven touchdowns.

In eight games, he has rushed 73 times for 278 yards and two scores. He has also caught a team-leading 38 passes out of the backfield for 459 yards and a team-best five touchdowns. And, he has returned 14 kickoffs for 332 yards.

“He's an incredibly versatile player,” Falcons quarterback Matt Ryan said. "He runs the ball. Physical, hard. Has the ability to come out the back end at any time. Then was drafted as a wide receiver in this league. You can put him out there and he can go do what wide receivers do.

“Not many people on this planet have that versatility."

With the NFL relaxing jersey number rules this season, Patterson has kept his No. 84.

Patterson also makes an impact catching passes, including the 64-yarder with a minute left Sunday that set up Atlanta's 27-25 upset at New Orleans.

Patterson’s steady production as a receiver out of the backfield has helped the Falcons withstand the absence of No. 1 wide receiver Calvin Ridley, who was placed on the reserve/non-football injury list to focus on his mental health.

“We need to continue to try and get him touches and find ways to get him the ball,” Ryan said of Patterson, “because he’s a playmaker.”

Several other players have emerged as offensive playmakers during the first half of the 2021 season. Among them:

The Heisman Trophy winner and top NFL draft pick in 2020 was having one of the best seasons by a rookie quarterback in league history before blowing out his left knee against Washington in Week 11. He's had a terrific comeback, going 5-4 after a 2-7-1 record last year. Reunited with former LSU star receiver Ja'Marr Chase (44 catches, 835 yards, 7 TDs), the ex-Tigers are spearheading Cincinnati's resurgence.

Yes, the fifth-year pass catcher established himself with a 10-touchdown season in 2019, but Kupp has ratcheted his game to a new level in 2021. He has won both NFC Offensive Player of the Month honors so far and his 10 TD receptions in nine games have tied his career high. His 74 catches are 20 shy of his career best and his 1,019 receiving yards are 142 away from his career high.

The 17th pick of the 2020 NFL draft had a solid debut in Dallas with 935 yards and five touchdowns on 77 receptions. But he's on pace to outdo all those numbers in 2021. He has 41 catches for 632 yards and four TDs so far and is one of the reasons the Cowboys got off to a 6-1 start before their dud against the Broncos on Sunday. His 14.4 yards per touch top last year's 12.1.

The 2020 second-round draft pick is second in the NFL with 821 yards rushing in nine games. Over his last 16 games, including a playoff loss to the Bills, Taylor has rushed for 1,640 yards and 16 touchdowns, has six 100-yard games and added another 395 yards and two TDs receiving. He has two of the NFL's longest active streaks: six consecutive games with 100 scrimmage yards and six straight games with a touchdown.

Pittman, like Taylor a second-round pick in 2020, struggled with injuries as a rookie when he caught 40 passes for 503 yards and a touchdown. This year, he has already has 50 receptions for 658 yards and five TD catches, numbers that put him in the top 10 in the NFL. With T.Y. Hilton injured, Pittman has become Carson Wentz's favorite — and most reliable — target, drawing penalties when he's not catching contested passes.