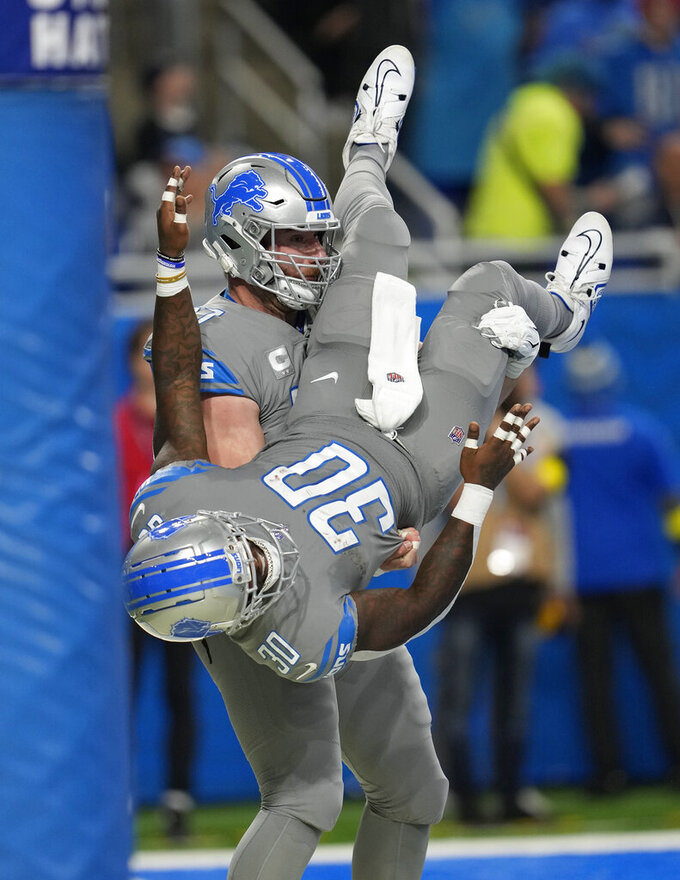 Detroit Lions center Frank Ragnow lifts running back Jamaal Williams (30) after Williams' touchdown during the first half of an NFL football game against the Miami Dolphins, Sunday, Oct. 30, 2022, in Detroit. (AP Photo/Paul Sancya)

One team is used to it.

The three-time defending NFC North champion Packers (3-5) have lost four straight and are aiming to avoid their first five-game skid in 14 years.

“There’s a little bit more urgency, I think, as the season gets into November," Green Bay quarterback Aaron Rodgers said.

The Lions (1-6) look like they're headed for a fifth straight last-place finish in the division, losing five in a row before November for the second time in two years under coach Dan Campbell.

“We're not looking at it as the season is over," said Detroit running back Jamaal Williams, a former Packer. “We still got games to play and there's still great players in his locker ready to go to work."

On Sunday at Ford Field, longtime rivals that have combined for nine straight setbacks will meet and one will earn a desperately needed victory — unless they finish with a fitting tie.

“They've got their own problems, and we have ours," Williams said. “We’re just trying to get it done for ourselves, come together as a team and come out with a ‘W.’"

Green Bay did not make a trade before this week's deadline to potentially bolster its chances of making the playoffs for the fourth time in coach Matt LaFleur's four seasons.

“We didn’t subtract, either, I think that’s a really important point to make," Rodgers said. “Obviously the organization — the third floor — believes that we have the right guys in place to win.

Detroit, meanwhile, traded arguably its best player to the NFC North-leading Minnesota Vikings on Tuesday to improve positioning in the next two drafts.

Lions general manager Brad Holmes said the dealing 25-year-old tight end T.J. Hockenson made sense for the franchise's “build phase,” and insisted he would have dealt Hockenson even if his one-win team had a 6-1 record.

While the trade might’ve made sense in the long term, it does not seem to help this season.

“We’re trying to get over this hump and he definitely could have helped us win," receiver Amon-Ra St. Brown said. “So, not having him out there is going to hurt.”

Rodgers has been playing through an injury the past few weeks after hurting his right thumb on the final play of a 27-22 loss to the New York Giants in London.

The reigning MVP was a limited practice participant Wednesday, an encouraging sign because he missed the previous three Wednesday practices to rest his thumb.

“I wish I could tell you it was feeling better,” the 38-year-old Rodgers said.

Green Bay selected Williams out of BYU in the fourth round of the 2017 draft and drafted Aaron Jones out of UTEP one round later.

Jones and Williams were teammates in Green Bay for four years. Williams left for Detroit in free agency after the Packers didn’t make much of an effort to keep him.

Willliams has eight touchdown runs to rank second in the NFL. Jones has run for 575 yards, ranking fifth in the league.

The Packers need a playmaker to emerge from their injury-riddled receiving corps and that could lead to more opportunities for rookie Samori Toure.

Toure, a seventh-round pick from Nebraska, had a 37-yard score in the Packers’ 27-17 loss at Buffalo for his second career catch and first touchdown. The play showed Toure is starting to shed the label he received from Rodgers last summer.

“I nicknamed him ‘Captain Casual’ in training camp as a way to maybe encourage him to start practicing with a little different type of tempo, practicing like a pro,” Rodgers said. “I don’t think he really appreciated that nickname. I mean, who would? But it’s gone from a nickname that was legitimate to more of a joke now because his practice habits have really picked up.”

The Packers have been dealing with injuries at receiver all season. Randall Cobb will miss a third straight game Sunday due to a high ankle sprain. Rookie second-round pick Christian Watson suffered a concussion early in the Bills game and didn’t practice Wednesday.

Detroit, which ranks last in multiple defensive categories, will have a new defensive backs coach after Campbell fired Aubrey Pleasant and replaced him with safeties coach Brian Duker.

“There’s ways that we can really just simplify the tools in their toolbox," Campbell said.