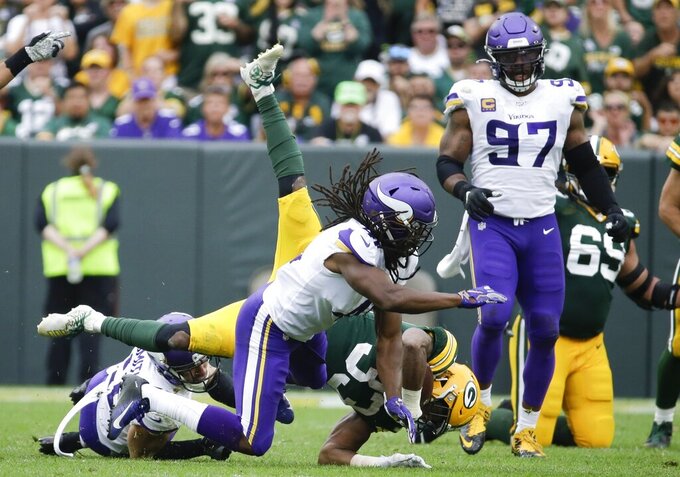 GREEN BAY, Wis. (AP) — All that mattered to Aaron Rodgers on Sunday was that the Packers won.

Rodgers threw two early touchdowns and Green Bay held on for a 21-16 victory over the Minnesota Vikings.

"The biggest thing is that we're 2-0," he said. "I know we owe a lot of that to our defense and (defensive coordinator) Mike Pettine and his staff and those guys for being opportunistic and making plays when they had to. But I think there's still a lot of great potential in this offense."

On a day when the Packers honored late Hall of Famer Bart Starr at halftime, Rodgers put on quite a show — particularly early. Rodgers completed nine of his first 10 passes for 134 yards and two touchdowns and had a perfect 158.3 rating through the first quarter. He finished 22 of 34 for 209 yards.

Rodgers and new coach Matt LaFleur experimented with Rodgers wearing a playcall wristband in the hope that it would speed up the play-calling process and get the offense out of the huddle quicker.

"Yeah, this is probably the wordiest offense I've been in since Cal," said Rodgers, who played college ball at California after transferring from Butte Community College. "I think it just helps with communication. He doesn't have to say 12 syllables to me, and then I say 12 syllables in the huddle. It helps speed things up a little bit. But we didn't use it a whole lot. We only used it about five or six times."

After scoring on each of its first three possessions, Green Bay's offense failed to muster another point. But the hot start was enough to win.

The Packers remained unbeaten under LaFleur after opening the NFL's 100th season with a victory at rival Chicago. They also beat the Vikings (1-1) for the fifth time in the past seven games at Lambeau Field.

Minnesota's Dalvin Cook had a career-high 154 yards and a touchdown on 20 carries. It was the third-year pro's second consecutive game with over 100 yards rushing. Cook also had 37 yards receiving in the loss.

After throwing the ball just 10 times in the opener against Atlanta, Kirk Cousins finished 14 of 32 with 230 yards, a touchdown and two interceptions. Cousins was picked off by Kevin King in the end zone late in the fourth quarter.

The Vikings are 5-2-1 in last their eight meetings against Green Bay.

Rodgers and Davante Adams connected on a 39-yard completion on the Packers' first offensive play. Rodgers found running back Jamaal Williams for a 15-yard touchdown to cap a four-play, 75-yard drive.

"We started off a lot faster," Adams said. "That's definitely what we were after this week."

It took Green Bay's offense all of 12 minutes to score more points (14) than it did in the season opener at Chicago (10).

After a missed field goal by Minnesota, receiver Geronimo Allison, who did not see a single pass against the Bears, gave the Packers a two-score advantage on a 12-yard strike from Rodgers.

The Packers took a commanding 21-0 lead with 2 minutes to play in the first half on 2-yard run by Aaron Jones.

"We came out hot," said Jones, who finished with 116 yards on 23 carries. "We thought we could do no wrong. We've just got to continue to work at it because the fourth drive, fifth drive, sixth drive, we want points on those as well."

After rushing for 111 yards and two touchdowns in a win last week against the Falcons, Cook broke out for a 75-yard score following a missed tackle by rookie safety Darnell Savage.

"Eventually one of us was going to make a play to get this game rolling, and it was just me that made a play," Cook said. "Whatever to get a team rolling, to get this thing going, that was the play to do it."

Stefan Diggs scored the Vikings' other touchdown with a 45-yard grab with 9:12 to play in the third.

"Disappointing loss today," Vikings coach Mike Zimmer said. "We fought hard, but we didn't play well enough to win. We had some dumb penalties. ... The interception at the end of the ballgame hurt."

Minnesota had eight penalties for 100 yards.

Packers: S Raven Greene was carted off the field with an ankle injury following the first play of the second half. He did not return.

The Packers honored Starr during a celebration that included a video tribute, words from Starr's wife, Cherry, and an appearance by NFL Commissioner Roger Goodell.

Starr, who died in May at 85, was the MVP of the first two Super Bowls and won the league MVP award in 1966 with the Packers. Starr has the highest postseason passer rating (104.8) of any QB in NFL history and a postseason record of 9-1. Starr was inducted into the Pro Football Hall of Fame and the Packers Hall of Fame in 1977.