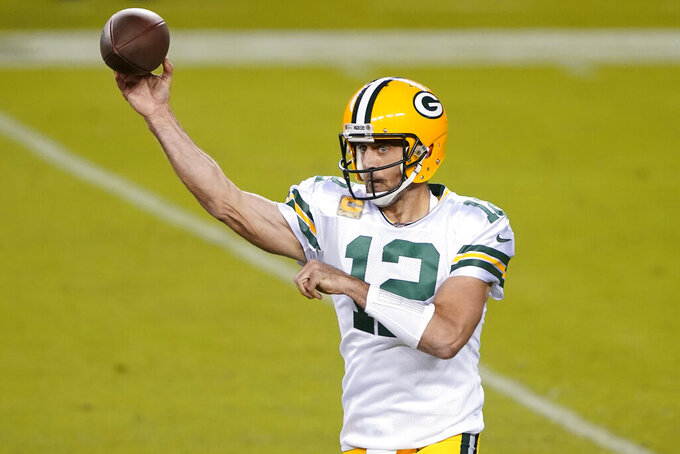 GREEN BAY, Wis. (AP) — Green Bay Packers quarterback Aaron Rodgers said he sees double standards in the safety protocols the NFL has instituted as it tries to complete a season amid the coronavirus pandemic.

“You can dap up a guy after a game, but you can’t eat at the same lunch table as a teammate,” Rodgers said Tuesday on SiriusXM’s “The Pat McAfee Show.”

“You can go down to practice and hit each other and be in close contact, but you have to have Plexiglas between you and the guy next to you in the locker room. I just think some of those things to me really don’t add up.”

Rodgers added that “some of it is definitely for the optics of it, some of it probably based on science, but it’s definitely changed the season for sure.”

The two-time MVP also noted that the protocols in place may have impacted team unity because it has prevented get-togethers such as weekly dinners or Halloween parties.

“I know a lot of people don’t give any credence or don’t (care) about chemistry, but I think it’s really important,” Rodgers said.

“Obviously in the past we’ve been able to have a lot of gatherings — Halloween stuff, Christmas stuff, going bowling, doing different events some of the players put on — so it’s gotten in the way a little bit,” Adams said. “But we just try to strengthen our connection in the building and at practice through football as much as possible.

During his Zoom session with Green Bay reporters Wednesday, Rodgers was asked what has stood out the most about dealing with COVID-19 protocols now that the season has reached its midway point. Rodgers noted how the Packers have played all their home games without fans thus far and then noted other moves the league has made to help the season continue.

“There obviously was talk about the protocols and the amount of testing we were going to do,” Rodgers said. “I think the (players association) and the owners agreed that keeping it every single day was important to making sure we had the right updates on the health of our players. I think that’s been good. I think it’s been a change, but I think we’ve done as well as we can in Green Bay. We’ve had a couple guys test positive, haven’t had the widespread stuff that so many people prognosticated about, that we weren’t going to get to this point. I think maybe some people even were hoping we wouldn’t get to this point.

The Packers (6-2) had three players on the COVID-19 reserve list when they beat the San Francisco 49ers 34-17 last week. The list is for players who either have tested positive or have had close contact with someone who was infected.

Linebacker Krys Barnes and quarterback Jordan Love went on the COVID-19 reserve list the day after the 49ers game. Love has since been activated.

By David Ginsburg 11 minutes ago
an hour ago
By Dennis Waszak Jr. 2 hrs ago
By Dave Skretta 2 hrs ago
By The Associated Press 3 hrs ago