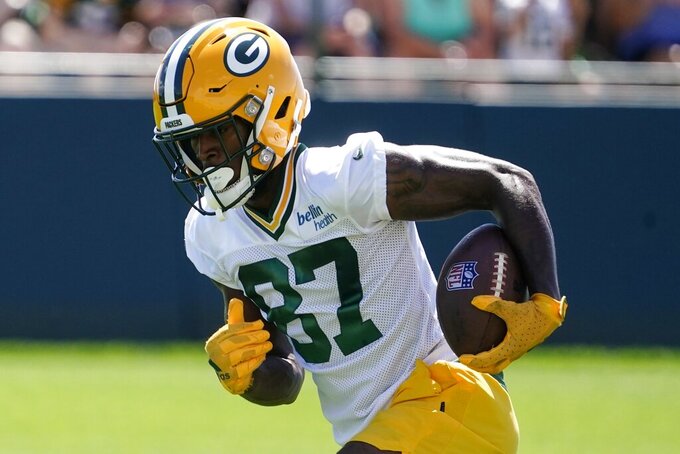 GREEN BAY, Wis. (AP) — This was supposed to be the training camp in which Christian Watson showcased why the Green Bay Packers traded up in the second round to take the wide receiver from North Dakota State.

It hasn’t quite worked out that way. Watson underwent knee surgery earlier this summer and hasn’t been available for any of the Packers’ training camp workouts thus far.

Instead, it’s been fourth-round pick Romeo Doubs making the case he merits a featured role on a receiving group that lost two-time All-Pro Davante Adams and Marquez Valdes-Scantling during the offseason.

“Every single day ... there’s been at least one kind of ‘wow’ play for him,” quarterback and reigning MVP Aaron Rodgers said Wednesday. “And that’s kind of rare for a young guy like that.”

Doubs started gaining notice last week when he beat cornerback Eric Stokes, a 2021 first-round draft pick, to catch a touchdown pass and later caught another pass in the end zone while being defended by 2021 All-Pro linebacker De’Vondre Campbell.

He’s continued to stand out ever since and beat Stokes in a one-on-one drill that highlighted Tuesday’s workout.

“I have to set myself at a standard to make sure Aaron has enough trust in me regardless of me being a rookie,” Doubs said.

Doubs didn’t hear his name called until the final day of the draft after a productive college career at Nevada. He had 20 touchdown catches over his last two seasons at Nevada and had more than 1,000 yards receiving in each of them.

Now he’s showing that perhaps he should have gone a round or two earlier.

“He’s consistent, man,” Packers coach Matt LaFleur said. “He’s got a great routine and he just goes out there with the right mentality and he’s done a really good job up to this point. But it’s still early on. I mean, shoot, we haven’t even played a preseason game yet. But I like what we see in practice.”

Doubs is doing his best to stay level-headed and not get caught up in the attention he’s receiving for his fast start.

“I feel like my camp is going really good,” Doubs said. “But just for myself, I continue to tell myself just focus on what’s next throughout the day. I just make sure I try not to get too high or low with myself.”

Doubs was one of three receivers drafted by the Packers along with Watson and seventh-round pick Samori Toure, who spent his final season of eligibility at Nebraska after beginning his college career at Montana.

Watson naturally got the most attention of the three after the Packers made a big move to get him. The Packers opened the draft with two second-round picks — No. 53 and No. 59 overall — and traded both for the right to take Watson at No. 34.

But he opened training camp on the physically unable to perform list.

Watson said he noticed some issues with his right knee during the Packers’ organized team activities and underwent surgery afterward. He said the knee hadn’t bothered him in college or during the pre-draft process.

The Packers haven’t announced a target date for Watson’s possible return, though he has said he doesn’t expect the injury to impact his rookie season.

“I believe everything happens for a reason and I know my role will be my role and I’ll own it regardless of what that is when I get back,” Watson said. “Obviously I’m still striving for the same things that I was striving for pre-surgery.”

The Packers remain confident Watson will catch up quickly once he's cleared to practice.

“He’s a smart kid,” Rodgers said. “It’d be nice if we could get him off the PUP so he could do some of the walk-through stuff, but he’ll be fine. He’s super athletic, he went through the whole offseason program with us — the OTAs and minicamp — and he’s been in my hip pocket, you guys have seen, he’s been in my hip pocket asking questions after period and during individual time. So I’m not worried about him.”

Watson says he has constantly sought Rodgers and veteran receivers Randall Cobb and Allen Lazard for advice. He hopes their lessons will help him make up for all the practice time he's missing now.

“It’s definitely frustrating, but I’ve tried not to let that affect me too much,” Watson said of the wait. “There’s still things I can do to get better and still be a part of everything, taking mental reps and still being in the playbook. So I try to look at positives and kind of stay away from the negatives.”