Packers TE Tonyan emerges as one of season's big surprises 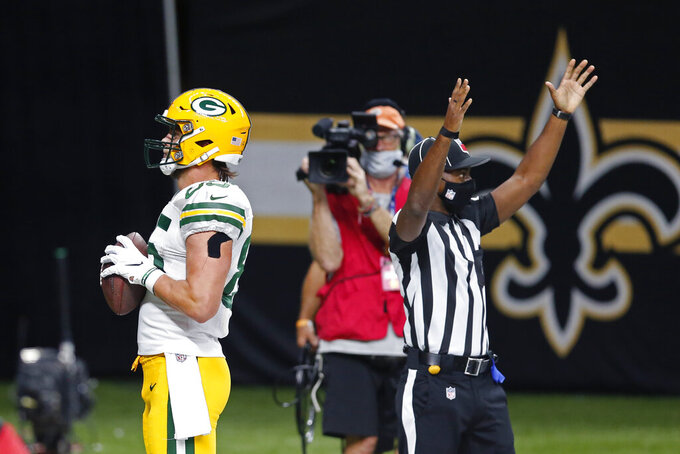 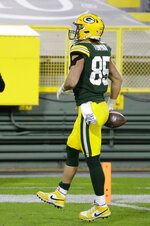 If Tonyan keeps up his current pace, the two tight ends could be working out together at the Pro Bowl.

Tonyan has scored in each of his last three games and has five touchdown catches, one behind NFL leader Mike Evans of Tampa Bay. He’s a major reason why the Packers (4-0) are unbeaten as they enjoy their off week.

Tonyan made those comments after catching six passes for 98 yards and three touchdowns – all career highs – in a 30-16 Monday night victory over the Atlanta Falcons.

His good friend with the 49ers knew Tonyan was capable of this.

“He’s a close friend of mine,” said Kittle, an All-Pro selection last year. “He was a groomsman at my wedding. So, yeah, I have high expectations of him as both a friend and as a football player.”

Tonyan and Kittle share an agent (Jack Bechta) and have been frequent workout partners since entering the league together in 2017.

“When you have a good relationship with one of your buddies and you’re also competing 24/7 when you’re with them, it brings out the best in both of us, just constantly competing and constantly getting better at just everyday life,” Tonyan said before the season.

Kittle sent a series of congratulatory tweets during Tonyan’s breakthrough performance Monday. But Tonyan was most impressed with a postgame comment from his own mother.

“She’s just super proud,” Tonyan said. “She’s done a lot for me over the years, whether it was sending my highlight tape out to college coaches, emailing every single college in America and getting out there. Just the most supportive woman I’ve ever met.”

The efforts of his mother exemplify the long road Tonyan took to Green Bay.

Rather than joining a Power Five school, he went to Football Championship Subdivision program Indiana State and spent his freshman season playing quarterback.

“I’m not one bit surprised that he’s having the success he is,” said Sanford, now a high school coach at Faith Lutheran in Las Vegas. “He’s a great athlete. He can jump. He can run. And the No. 1 thing is he has great hands. He catches everything.”

Tonyan showed that athleticism, and the benefits of his twice-a-week yoga sessions, on one of his touchdowns Monday. After Falcons defensive back Jamal Carter dived and tackled him, Tonyan somersaulted around the 10-yard line and got back up to make the catch.

Tonyan now is the first Packers tight end in the Super Bowl era to have five touchdown catches through the first four games of a season.

“There are a lot of things I want to keep improving on and getting better at and change, but being mentally at peace when I go out on that field, it’s so relieving,” Tonyan said. “That’s really like my getaway, is just to get out on that field and play football and be happy.”

The Detroit Lions signed Tonyan as an undrafted free agent in 2017 but waived him. The Packers put him on their practice squad later that year. He caught one touchdown pass each in 2018 and 2019.

“When you see a guy pushing through an injury like that, not making excuses and trying to suit up every single week, you can’t help but gain a lot of respect for them,” quarterback Aaron Rodgers said. “And I don’t think it was just myself. There were a lot of people who really saw that and saw he was trying to battle to be out there, that he earned a lot of our respect.”

“I love his mentality right now,” LaFleur said. “He’s willing to stick his face in there and become a better run blocker, as well.”

LaFleur pointed out how Tonyan reshaped his body and “came back bigger, stronger, faster.”

That’s the progress Kittle noticed this offseason well before the rest of the NFL got a chance to witness it.

”I’m just so happy for him because he’s a really good tight end and he has a chance to be great,” Kittle said. “And he gets to prove that now.”