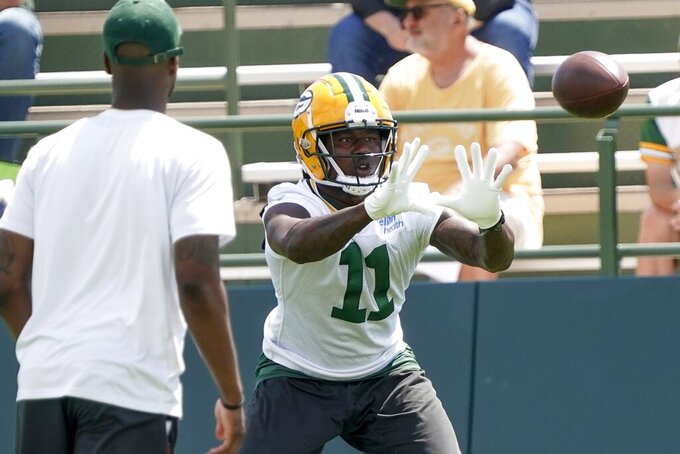 GREEN BAY, Wis. (AP) — Sammy Watkins was sitting on his couch and wondering whether his football career was over.

Injuries had limited the effectiveness of the No. 4 overall pick in the 2014 draft. He was coming off a season in which he had caught just 27 passes for 394 yards and one touchdown, career lows in all three categories.

“After injury after injury, you kind of get worried,” Watkins recalled Wednesday. “What is my destiny? What team is going to pick me up?”

Then came a call from the Green Bay Packers that changed Watkins’ entire attitude.

Not only has he found a new home, he gets to catch passes from four-time MVP quarterback Aaron Rodgers.

Watkins can’t wait for the opportunity.

“I think I told the coaches, ‘My back is against the wall,’" Watkins said during the Packers’ mandatory minicamp. “My career hasn’t been what I projected it to be, and it’s a great opportunity for me to come here, play hard, catch a ton of balls, compete at the highest level and win games and fight to stay healthy.”

Watkins and his new team consider this a win-win situation.

The Packers need to restock at receiver after trading two-time All-Pro wideout Davante Adams to the Las Vegas Raiders. Watkins needs to rejuvenate his career.

“I just kind of look at what Davante Adams and this offense has been doing and seeing how can I fit into it, how can I play hard and how I can play my best ball and just do whatever I can in my might to help this team,” said Watkins, who turns 29 on June 14.

Although the Packers drafted three receivers — North Dakota State’s Christian Watson in the second round, Nevada’s Romeo Doubs in the fourth and Nebraska’s Samori Toure in the seventh — Watkins is the only veteran wideout they’ve added.

“I think it’s important you get guys who have a lot to play for,” Rodgers said. “And I think Sammy has the opportunity to continue and travel down a new path in his career that we can help him here as he continues to improve and gets opportunities. The most important thing for receivers and pass catchers and ball carriers is opportunities, and there’s definitely going to be opportunities for him to make plays for us in this offense.”

Watkins has a track record of success, though his best seasons came several years ago.

But he hasn’t caught more than 52 passes or accumulated more than 673 yards receiving in any of his six seasons since, a stretch that included stints with Buffalo, the Los Angeles Rams (2017), Kansas City Chiefs (2018-20) and Baltimore Ravens (2021).

Watkins has a total of nine touchdown catches over the past four seasons since scoring eight times his lone season with the Rams. Packers coach Matt LaFleur was the Rams’ offensive coordinator that year and believes Watkins still has plenty of potential.

“I don’t think his game has fallen off at all since we were together in 2017,” LaFleur said. “A little bit has been maybe a little bit a lack of opportunity, but I think he’s a guy that’s out there working hard and he’s going to be a big part of our offense.”

LaFleur isn’t the only Packers coach who has experience with Watkins. Wide receivers coach/passing game coordinator Jason Vrable was on Buffalo’s staff when the Bills drafted Watkins out of Clemson in 2014.

Watkins is eager to recapture the form he showed the previous time he worked with each of them.

“(It’s) really just bringing me back to the kid I was back in Buffalo and playing hard, playing physical and loving the game,” Watkins said. “I think that’s what this year’s about.”

It’s also about staying healthy. Watkins says he’s been doing more stretching and spending additional time in the cold tub in an attempt to lengthen his career and avoid missing time.

That’s quite the transformation for a guy who says he was about 220 pounds — 5 to 10 pounds above his typical playing weight — when he was waiting for an offer and fearing he was finished.

Now he’s planning for a football future that could last well beyond this season.

“I’m sitting on the couch, like I’m going to be out of a job,” Watkins said. “To get that call is like, man, I got another opportunity, another chance to come in and play hard and stay healthy and hopefully play for another three or four years or five or six years, whatever that is.”