Panthers' Horn returns, has chance to be a 'special player' 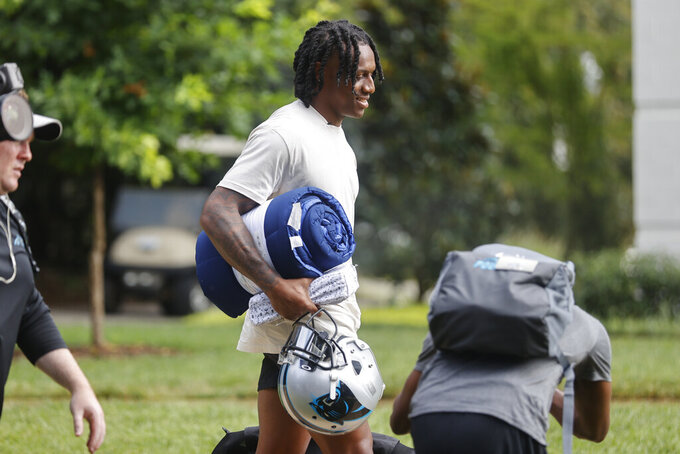 “Seeing the confetti drop from the ceiling, (seeing) everybody’s expressions and everybody so happy — that’s the experience everyone wants,” Horn said. “This is my last shot at it, so I hope I can win a Super Bowl.”

First though, Horn needs to get completely healthy.

The No. 8 overall pick in last year’s draft said he’s still feeling the aftereffects of surgery for broken bones in his right foot stemming from a freakish Week 3 injury last season against the Houston Texans.

The non-contact mishap occurred when Horn was back-peddling on the far side of the field and felt a sharp pain in the foot, causing him to fall to the ground and immediately begin calling for the aid of a trainer.

A day later Horn was informed his season was likely over.

He missed the final 14 games, ending a promising start to his NFL career.

“At first when it happened, I was hoping it was something minor," Horn said. "When I got the news I was frustrated and mad. But after that I was just trying to work on getting better every day and working my way back onto the field.”

Horn participated in the team's OTAs and minicamp earlier this offseason, so when he was added to the PUP (physically unable to perform) list at the start of training camp with soreness in that same right foot it raised some eyebrows.

But Horn said doctors and others who've experienced similar injuries have told him that is natural when returning from a broken foot.

The 6-foot-1, 200-pound Horn missed the first week of training camp, but returned to practice on a limited basis on Monday. The Panthers are slowly working him into the mix, careful not to overdue the strain on his foot while attempting to ramp up his workload.

That has put Horn back into an all-too-familiar role of watching, rather than playing.

But he said the one thing he's learned from last season is patience and winning the mental battle in his head.

Panthers coach Matt Rhule said Horn has already proven to him he can be a "special player” in the NFL given his rare combination of speed, strength and athleticism, and he knows the team can't afford to lose him again.

“Jaycee last year was a physical presence, explosive, aggressive and didn’t back down from anybody," Rhule said. “We missed him when he was gone.”

Horn is scheduled to start alongside Donte Jackson in year two. When the Panthers go to three cornerback sets, Rhule said Horn will move inside to the nickel spot while C.J. Henderson, another former top-10 NFL draft pick, will take the outside.

When all three cornerbacks are healthy and with Jeremy Chinn and Xavier Woods at safety, the Panthers believe they have one of the best defensive backfields in the league. Carolina gave up the second-fewest yards passing in the league in 2021.

Horn said the sky is the limit.

“The raw talent we have. We’ve got athleticism. We have two of the fastest corners in the league in Donte and C.J. and I’m not slow myself for a big guy," Horn said. "And we all compete hard. If we get beat, we get right up and challenge on the next play.”

The Panthers, who are coming off back-to-back five-win seasons, are still viewed as long way from being a team that competes for a championship.

But if Horn has his way, the confetti will drop someday.

“Win,” Horn said of his primary goal moving forward. “I feel like the individual goals will come when you're playing good. I want us to play good as a defense and help this team win football games.”