In passing league, some teams still find success on ground 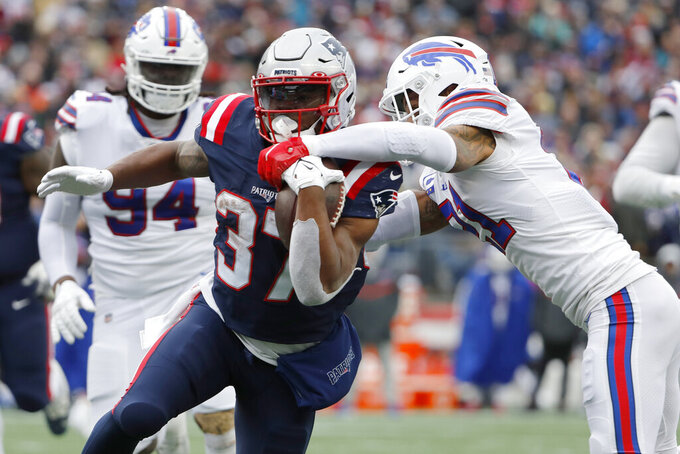 New England Patriots running back Damien Harris (37) hangs onto the ball as Buffalo Bills free safety Jordan Poyer, right, tries for the strip on his touchdown run during the first half of an NFL football game, Sunday, Dec. 26, 2021, in Foxborough, Mass. (AP Photo/Winslow Townson)

SANTA CLARA, Calif. (AP) — Relying on a big-play quarterback to carve up opposing defenses in the passing game remains the best path to offensive success in the modern NFL.

But for teams that don't have an accomplished passer like Aaron Rodgers, Tom Brady or Patrick Mahomes, sticking to the ground can also work.

“If you want to establish any type of dominance, especially in the trenches, I think it is necessary,” San Francisco 49ers left tackle Trent Williams said. "You got to run the ball. You got to make your opponents respect that.”

The 49ers are one of several teams with less-than-elite quarterbacks that have relied on the run to get into playoff contention, along with Indianapolis, Philadelphia and New England.

Perhaps no team has transformed as much as the Eagles, who flipped their script by running just 39% of the time the first seven weeks to a league-high 61% the last nine weeks. That has coincided with a resurgence that has taken Philadelphia from 2-5 to 8-7 and playoff contention.

“I think you’re always evolving and changing to make sure you’re doing the best things for your players,” Eagles coach Nick Sirianni said. “I think we definitely changed who we had been and who we are, and to find out what we do best."

Running behind a powerful offensive line and using quarterback Jalen Hurts in the run game has been that as the Eagles became the first team since the 1985 Bears to run for at least 175 yards in seven straight games.

The Colts, Titans, 49ers and Eagles all rank in the top eight in the league in running on first and second downs in the first 28 minutes of the game, when the game situation doesn't dictate strategy like it might later and on third downs.

“It keeps the defensive line out of rhythm," said Falcons quarterback Matt Ryan, whose team has gone back to a heavier reliance on the run in coach Arthur Smith's first season.

"When they don’t have the chance to just pin their ears back and know it’s going to be drop-back pass, it makes it more difficult for them when they’ve got to defend both. ... This league is about slowing down those guys on the other side of the ball and finding ways to do that, and running the football has certainly helped with that.”

The Niners also turned their season around with a three-game stretch when they ran the ball at least 39 times each week. It started when coach Kyle Shanahan challenged his team to run the ball 40 times in a Week 10 game against the Rams that the 49ers won 31-10.

San Francisco finished with 44 rushes thanks in part to the defense generating turnovers, efficient third-down passing from Jimmy Garoppolo, and a tone-setting opening 18-play drive that featured 14 runs.

“I don’t want to say it took their soul away, but it definitely did something," Garoppolo said.

While that opening drive may have set the tone, maintaining that approach all game is only possible when playing with a lead. Passing is still overall more efficient and necessary if teams are forced into catch-up mode.

Even as offense has regressed a bit this season, passing the ball on average still generates more yards, with teams averaging 6.26 yards per drop back compared to 4.31 per rush.

While the pass leads to more explosive plays that have a big influence on wins and losses, running the ball does bring other elements to the game.

But differentiating between runs and passes isn't as clear cut as it used to be with teams using more RPOs than ever, when the play call includes both a pass and run option and the quarterback determines which to do based on how the defense reacts at the snap.

The RPO percentage has risen from 6% in 2020 to 9.5% this season, according to Sportradar, with teams passing on about 45% of those plays.

“Because we have Jonathan Taylor and the offensive line we have, teams get very creative with run blitzes and in heavy boxes,” Colts coach Frank Reich said. “So, one of the ways to combat that is formationally to do things, and another way is RPOs. So, we’re going to continue to not major in RPOs, but it’s going to be a part of what we do.”

Taylor leads the NFL with 1,626 yards rushing and has the Colts in position to seize an AFC wild-card spot.

The run game has been a major part of New England's resurgence with the Patriots running at a higher rate this season with rookie Mac Jones at quarterback than they did in any of Brady's last 12 seasons as starter. That has helped the Patriots win nine games and tie Buffalo for the lead in the AFC East despite relying on a rookie quarterback.

New England is in this position in large part to a 14-10 win three weeks ago in Buffalo when the Patriots threw only three times on a windy night and ran it 46 times for 222 yards.

“I don’t think they’ve ever been given enough credit of how physical they are on both sides of the line of scrimmage," Falcons coach Arthur Smith said. “They’ve always been able to manage to run it. ... Year over year the teams that can handle the line of scrimmages whether that’s part of the run game or they’re very physical on the other side of line of scrimmage are usually the ones playing in January.”