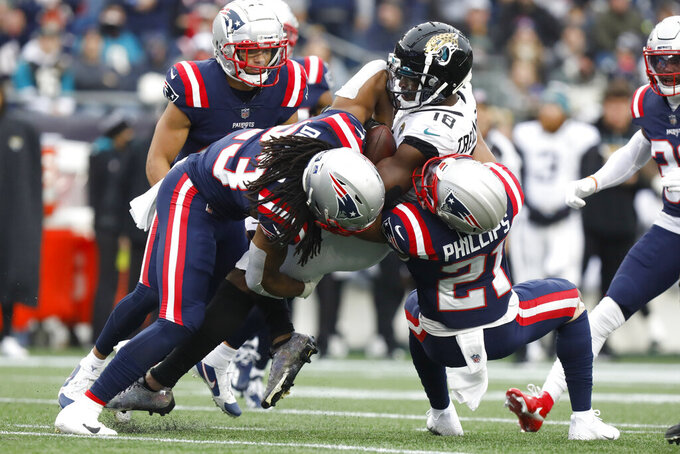 FOXBOROUGH, Mass. (AP) — The Patriots’ one-year, post-Tom Brady postseason drought is over because of their 50-10 rout of the Jaguars on Sunday.

Yet there’s something resonating more in New England’s locker room heading into the final week of the regular season. It’s a sense that the team finally has the confidence back it lost after following up a season-high, seven-game win streak with back-to-back losses to the Colts and Bills.

But with a small chance to still take the AFC East title this week with a win at Miami and a Bills loss to the Jets, the Patriots are refraining from patting themselves on the back.

“When you start the year, you want to be in the postseason,” coach Bill Belichick said Monday. “The fact that we’re one of the playoff teams is, obviously, part of the goal. Long way to go. We’ll see what happens, but you certainly want to be playing in the postseason. That’s the idea.”

While their performance did come against a Jacksonville team just trying to make it to the finish line of a disastrous season, the Patriots did leave the game with plenty to build on.

The defense forced multiple turnovers for the first time in three games, improving their record to 7-1 this season when that occurs. The offense also finished drives, scoring all six times it reached the red zone.

Safety Adrian Phillips said it felt like the brand of football they want to play.

For the first time in three games the Patriots got off to a fast start and were able to play from in front, scoring touchdowns on their first five drives to build a 34-3 lead.

The Patriots did have an extra point blocked in the third quarter. It wasn’t a huge deal with a 41-3 lead, but it was their second special teams mishap in three games. They also had a punt blocked and returned for a touchdown in their Week 15 loss to the Colts.

Kristian Wilkerson. The second-year receiver added his name to New England’s long list of undrafted players to make a significant impact within their first few seasons. He hauled in the first two touchdown catches of his career after being promoted from the practice squad for the second consecutive week. He got the snaps that had been going to N’Keal Harry. He was a healthy scratch Sunday after being limited early in the week with a hip issue.

Harry. The 2019 first-round pick’s prospects are not looking great following the performance by Wilkerson. Harry’s agent made a surprise trade request prior to training camp and though Harry ultimately had a sit down with Belichick and remained on the roster, his production has continued to wane.

In his first two seasons, Harry logged 21 games and been targeted 81 times, totaling just 45 catches for 414 yards and four touchdowns. This season he has only 12 catches (21 targets) for 184 yards and no TDs in 11 games.

RB Damien Harris sat out most of the second half with a hamstring issue but said, “I’m good,” when asked about his status postgame. Phillips said he was OK following a wrist injury that also cut his day short in the second half.

9 — The number of games Mac Jones has this season with a completion rate of 70 percent or higher, tying him with Dak Prescott (nine in 2016) for the most such games by a rookie quarterback all time.

The Patriots will look to get even for their season-opening loss to the Dolphins, who have been eliminated from playoff contention. New England is 1-3 in its past four trips to Miami.