Perhaps, it's time to start taking the 7-2 Bills seriously 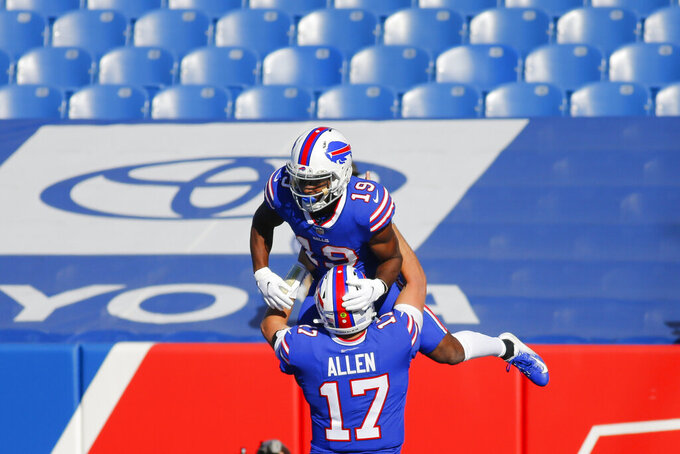 Buffalo Bills quarterback Josh Allen (17) celebrates with teammate Isaiah McKenzie after they connected for a touchdown during the first half of an NFL football game against the Seattle Seahawks Sunday, Nov. 8, 2020, in Orchard Park, N.Y. (AP Photo/Jeffrey T. Barnes)

ORCHARD PARK, N.Y. (AP) — It was only a week ago when Bills coach Sean McDermott encouragingly acknowledged he was starting to see his team forming an identity.

“I think we’re getting there,” McDermott said, with a hint of caution by emphasizing the season is far from over.

His assessment came after Buffalo cleared a formidable psychological hurdle by beating New England for the first time in McDermott’s fourth season and just the sixth time in 41 meetings dating to 2000.

Given the Patriots’ struggles minus Tom Brady this year, the 24-21 result — capped by Justin Zimmer forcing Cam Newton’s fumble with 31 seconds remaining — was important, but not altogether surprising.

A clearer picture came into view Sunday in how the Bills asserted themselves from the opening kickoff of a 44-34 win over NFL MVP candidate Russell Wilson and the NFC West-leading Seahawks (6-2).

In becoming just the eighth team to beat Seattle by 10 or more points in nine years, the AFC East-leading Bills (7-2) gained a semblance of legitimacy in a season in which two of their victories came against the winless Jets, with the two losses coming in consecutive weeks to Tennessee and Kansas City.

They have an offense which reverted to early-season productive form. Josh Allen oversaw a relentless passing attack that produced three touchdowns on Buffalo’s first four possessions. With 415 yards passing, matching the career high he had in a Week 2 win at Miami, Allen joined Drew Bledsoe in 2002 as Buffalo’s second player with two 400-yard outings in one season.

“We’re a resilient group. We’ve put some bad games on tape, but just like in years past, we’ve prevailed,” safety Micah Hyde said. “We want to continue to get better. As long as we’re getting better late in the season, it’s a process.”

“Process” is something McDermott used in nearly every news conference during his first season in outlining how building a winner was going to take time and patience.

Today, the Bills are showing signs of sustainable success, putting themselves in position to make a third playoff appearance in four years. That’s a dramatic turnaround for a franchise which endured a 17-year playoff drought before McDermott took over.

It's apparent to McDermott how much his team has matured.

“The expectation’s changed. And that’s where you want to be,” McDermott said. “It becomes part of the institution if you will, part of who we are, part of what we do and how we do things. That’s the best thing I can say internally at this point.”

With Buffalo having at least seven wins through nine games for the first time in 27 years and in contention to win its first division title since 1995, McDermott has the results to prove it.

A passing attack which caught Seahawks coach Pete Carroll by surprise. For some reason, Carroll acknowledged he expected the Bills to come out running. Instead, the Bills ran the ball three times in the first half, while Allen’s 24 completions, on 28 attempts, and 282 yards passing were the most in the first half by a Bills player since at least 1991.

A niggling point in an otherwise dominant win is how the Bills settled for three field goals on seven trips inside the red zone, including one after Buffalo's second half-opening possession stalled at Seattle’s 4.

Linebacker A.J. Klein was in on five tackles, had two sacks, including a forced fumble which he recovered at Seattle’s 19 to effectively seal the win with 6:30 remaining. Klein started in place of Matt Milano, who will miss at least three games with a partially torn pectoral muscle.

Defensive tackle Harrison Phillips has gone from being the season-opening starter to inactive for the third time in four weeks.

LG Cody Ford did not return after hurting his ankle in the first quarter. ... 2019 All-Pro CB Tre’Davious White limped off the field late in the fourth quarter, and it’s unclear if he would be able to return.

1 — Allen became the first quarterback in the Super Bowl era to have at least two games with 400 yards passing, three or more touchdowns, no interceptions and a 130 or better passer rating in one season.

The Bills must focus on the task at hand in traveling to face the Arizona Cardinals (5-3) on Sunday before their bye week.