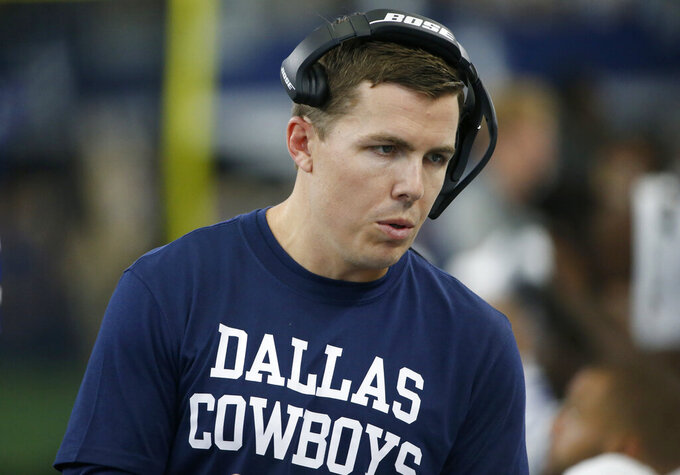 Dallas Cowboys offensive coordinator Kellen Moore talks with players on the sideline in the second half of a NFL football game against the New York Giants in Arlington, Texas, Sunday, Sept. 8, 2019. (AP Photo/Ron Jenkins) 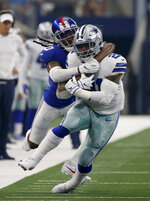 ARLINGTON, Texas (AP) — Dak Prescott had the second perfect passer rating in the history of the Dallas Cowboys in his first game with new offensive coordinator Kellen Moore.

The defending NFC East champions couldn't have asked for much more from a no-doubt 35-17 win over the New York Giants in the opener, particularly after the offense was so heavily criticized last year in Scott Linehan's final season as the play-caller.

Prescott tied a career high with four touchdown passes while starting his fourth season by reaching 400 yards (405) for the second time. There were open receivers everywhere, including tight ends Jason Witten and Blake Jarwin and new slot receiver Randall Cobb on TDs.

"Just the timing of some of those play calls," Prescott said in trying to describe the difference from a year ago. "I don't know if we ran one play tonight that hasn't been in our offense for some time. Credit to Kellen for dialing them up at the right time."

Prescott led five straight touchdown drives of at least 75 yards apiece while becoming the fourth QB to register a 158.3 rating on 30 or more attempts (25 of 32). Jared Goff of the Rams did it last season. Before that, it had been 18 years.

Craig Morton had the other perfect passer rating for the Cowboys in 1969.

"He's just in complete command of this offense," said Witten, who set a club record with his 16th season after spending a year in retirement as a broadcaster. "That was just the perfect storm with the way we were attacking."

Jarwin has four TDs in the past two regular-season games, both against the Giants. Witten got a score in his return, moving within four of Dez Bryant's franchise record of 73 touchdown grabs. The Witten TD was a great illustration of how the Cowboys can solve last season's red-zone woes.

Ezekiel Elliott wasn't sharp four days after signing a $90 million contract extension that ended a preseason-long holdout. But it shouldn't take the two-time rushing champ long to get into game shape.

Michael Gallup appears ready to handle more than a supporting role at receiver alongside Amari Cooper and Cobb. The second-year man followed up on a strong preseason with team highs of seven catches and 158 yards. "This was just opportunity and preparation for Gallup," said Cooper, who had six grabs for 106 yards and a touchdown.

LB Sean Lee played just 23% of snaps (16 of 69), fewest among the four defensive starters who missed most or all of the preseason nursing injuries. The longtime leader has switched spots to accommodate the young emerging stars in Jaylon Smith and Leighton Vander Esch. It appears the 33-year-old could be playing for scraps, if Lee can stay healthy.

0 — Sacks of Prescott after he was dropped 56 times last season, second-most in the NFL. The Cowboys had their Pro Bowl-laden line intact for the first time since the end of 2017. Center Travis Frederick missed all of last season with a nerve disorder.

The Cowboys can get an early edge in the division race with a win at Washington on Sunday. Four years ago, Dallas started 2-0 with a pair of NFC East wins in similar circumstances, carrying high expectations after winning the division and a wild-card game.

Those hopes were dashed when Tony Romo broke his collarbone in the second game, a win at Philadelphia. Romo lost his job to Prescott a year later, and eventually retired, after injuring his back in the preseason.