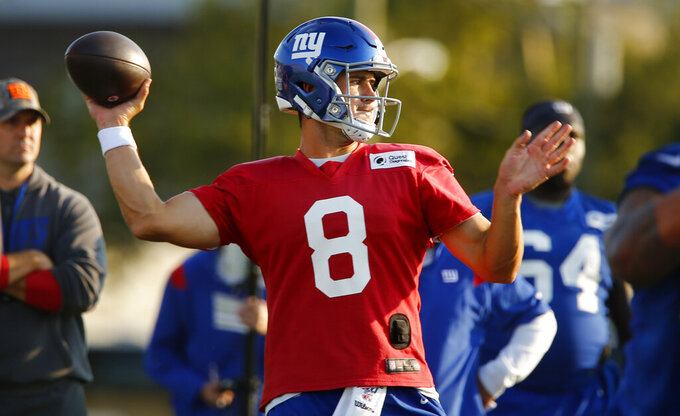 EAST RUTHERFORD, N.J. (AP) — Starting quarterback Daniel Jones is not going to play in the New York Giants preseason opener against the Jets on Saturday.

Coach Joe Judge disclosed the decision on Thursday before the team held a longer-than-expected walk-through practice at MetLife Stadium, where the game will be played in front of fans.

It's expected that veteran Mike Glennon, who was signed as a free agent in the offseason, will get most of the work. First-year quarterback Clayton Thorson would finish up.

“I mean, it’s not my decision," said Jones, who is entering his third season and second as the full-time starter. “I’m a player, he’s a coach, and that’s the way it goes. My job is to prepare and prepare as if I was playing, and help the team prepare.”

A request for Glennon to speak after practice was made, but the 31-year-old, nine-year veteran was not made available.

Judge wants Glennon to show he can run the offense.

“To me, the quarterback’s role is always to make sure the offense operates the way it should, that they’re on the same page and just consistently improve,” Judge said. “One thing I’ve seen in Mike is consistently taking a step forward every day. I’m pleased with the way he’s managing the offense.”

Judge has not decided whether his offensive line will play on Saturday against the Jets.

“We’re going to talk to our players later on and we’ll make that decision,” he said.

Judge intends to use the first preseason game to see as many players on the lower half of his roster as possible. NFL teams have to make three cutdowns this season and the first will be on Tuesday, when the roster goes from 90 to 85.

Judge plans to use the final preseason game against the New England Patriots on Aug. 29 as the final tune-up for his starters. He expects to have them play a half in preparation for the season opener against the Denver Broncos at MetLife on Sept. 12.